Blood, sweat and tears was Mike Libecki’s motto for the expedition. After 16 days on Poumaka—a jungle spire on the remote island of Ua Pu in French Polynesia—Libecki and his climbing partner Angie Payne experienced it all. They battled jungle, mud, horrendous choss, sometimes wearing crampons, and massive whippers to forge a new eight-pitch A4 up the 3,264-foot spire. They succeeded in the end, but got off to a rough start, which brings us to this week’s double-shot Weekend Whipper.

“It was a crazy first pitch,” Libecki tells Rock and Ice. “I had just taken off my crampons and threw them down to Angie, as I had to front point and runout a small section of rock with moss and roots on it.

“I decked, but fortunately it was pretty jungly-soft so a somewhat mellow landing.” Libecki managed to climb the pitch on his second try, “with proper free shoes and protection with beaks. Needless to say, the first pitch was pretty interesting!”

Higher on the route, Libecki took whip number two when he tried to aid through “some overhanging, rotten coral…right off the anchor.” The nut popped and he went crashing into the rock just below the belay.

“My knee was worse than I let on at the moment,” he says. “Did not want to freak out Angie any more at that point, and knew I just needed to get back on lead right away. My sock and shoe were filled/caked with blood by the time I finished the pitch.”

Libecki took a third whip while trying to free an overhanging, expanding crack, but it wasn’t caught on camera. “Only the first cam blew when I fell,” he says. “Another exciting ride!

“Ha, what’s that saying? ‘Not whipping, not going for it!’ Something like that.

“[It] was a really strange climb…emotional and beautiful, and honestly, pretty challenging.”

Original footage and edit by 3 Strings Productions, re-edited with permission for a Rock and Ice Weekend Whipper. 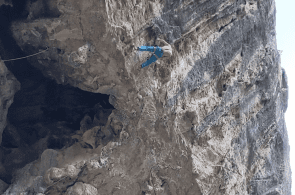 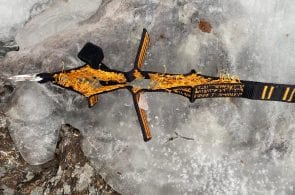 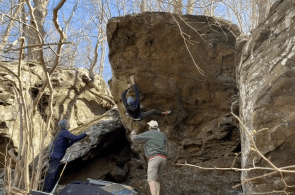 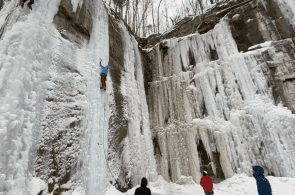 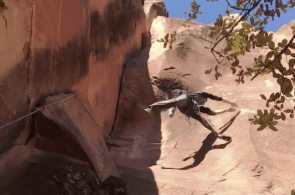 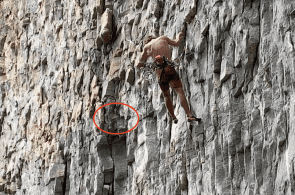