This one is pretty fascinating. Be sure to read the description for some expert analysis by Kolin Powick, Climbing Category Director at Black Diamond 🔥

Self closing and opening carabiners? This could be a great idea for a forward-thinking climbing company: a smart carabiner, a la those creepy Alexa things people have in their homes. Just say carabiner open, and voila!

While it didn’t work quite that way in this Whipper, the quickdraw did ultimately unclip itself. Aislynn Trompler was climbing Hippocrite (5.12a) at the Zoo, in the Red River Gorge, Kentucky, belayed by Jonathan Neville.

We asked Kolin Powick, Climbing Category Director at Black Diamond, to break down for us what he believes happened based on the video. “The Biner started off cross loaded during the fall and then got hung up a bit as the fall started,” Powick says. “With everything flipping and flopping around during the fall (which is normal), plus the tension in the rope because the bolt above was clipped, the dogbone migrates UP the gate. The spine of the carabiner hits the wall, causing the gate to open. As the gate is open, the dogbone slides right off.”

Trompler was fine, clearly—the draw that unclipped itself from the rope was not the highest she had clipped, so it was a normal fall other than that. But, Powick says, “If she had fallen prior to the next bolt clipped, the same thing may have happened… tough to say because the tension in the rope up to the next bolt wouldn’t have been there. Regardless, if it had happened, she would have been in for a big whip, and perhaps been pretty darn close to the ground.”

Ultimately, this kind of whipper is a good learning and teaching experience. “I think the moral of the story is take note of the orientation of your quickdraws as you climb past them. If they’re out of whack, fix them,” Powick says. “If I’m belaying and notice something that doesn’t look right, I’ll tell the climber to flick the rope to get things to orient correctly. Correctly oriented carabiners and quickdraws are far less likely to have wackiness like that happen.” 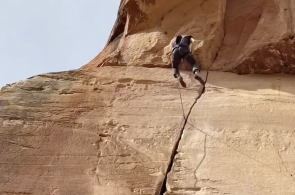 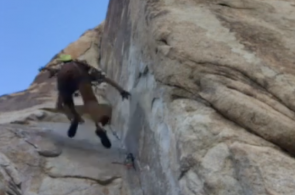 Weekend Whipper: "Getting Kind of Leg Pumped" in J-Tree 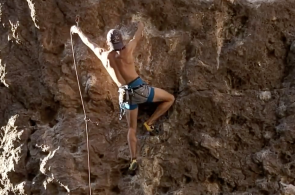 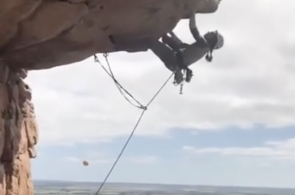 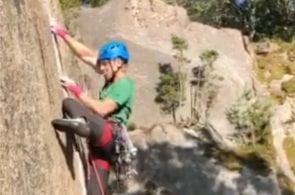 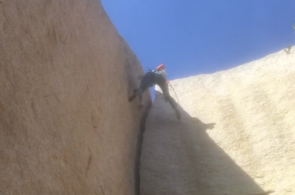