Melissa Le Nevé takes one of the scariest whippers we’ve seen of late in this footage from Germany.

This Whipper of Melissa Le Nevé was filmed by Michael Gunsilius , and his reaction in the video sums up how scary, fluky and—ultimately, given the outcome—lucky this fall is.

Earlier this year, Melissa Le Nevé became the first woman to climb Action Directe. The famously powerful and gymnastic 9a (5.14d) established by Wolfgang Güllich in 1991 in the Frankenjura, Germany, is a benchmark for the grade. Le Nevé’s seven-year journey toward this historic moment in climbing is the subject of one of the forthcoming mini-feature films in REEL ROCK 15. (The trailer just dropped, check it out here!)

Anyway, back to the whipper above…

On her path to climbing Action Directe, Le Nevé found herself trying Bionic Commando, an 8c+ (5.14c) at a crag called Jesuswand in Bavaria, Germany.

This fall is from an attempt before her eventual redpoint. In the upper half of the climb, Le Nevé skipped a bolt. She clipped the next one (just below her in the video). She then peeled off at the very top of the route. You can see the rope begin to come taut, and then suddenly she continutes to plummet. According to Gunsilius, the nut holding the bolt in place had come loose; when she fell it popped off altogether, along with the bolt hanger.

Miracously, Le Nevé’s belayer, Fabian Buhl, managed to bring her to a stop just before she hit the ground, avoiding catastophic injury.

Stay vigilant out there folks. 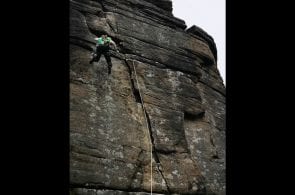 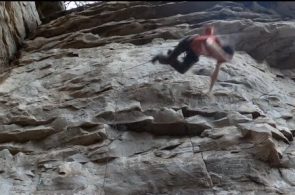 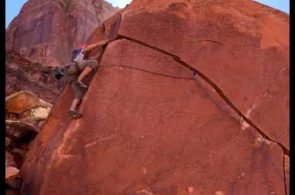 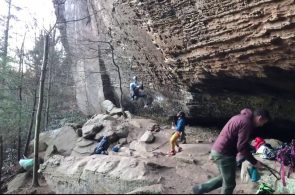 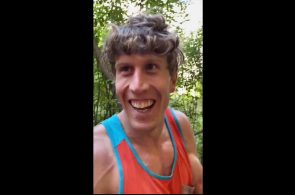 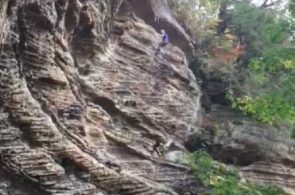