Climbing Has Gone Mainstream. Are Our Crags Ready? - Rock and Ice 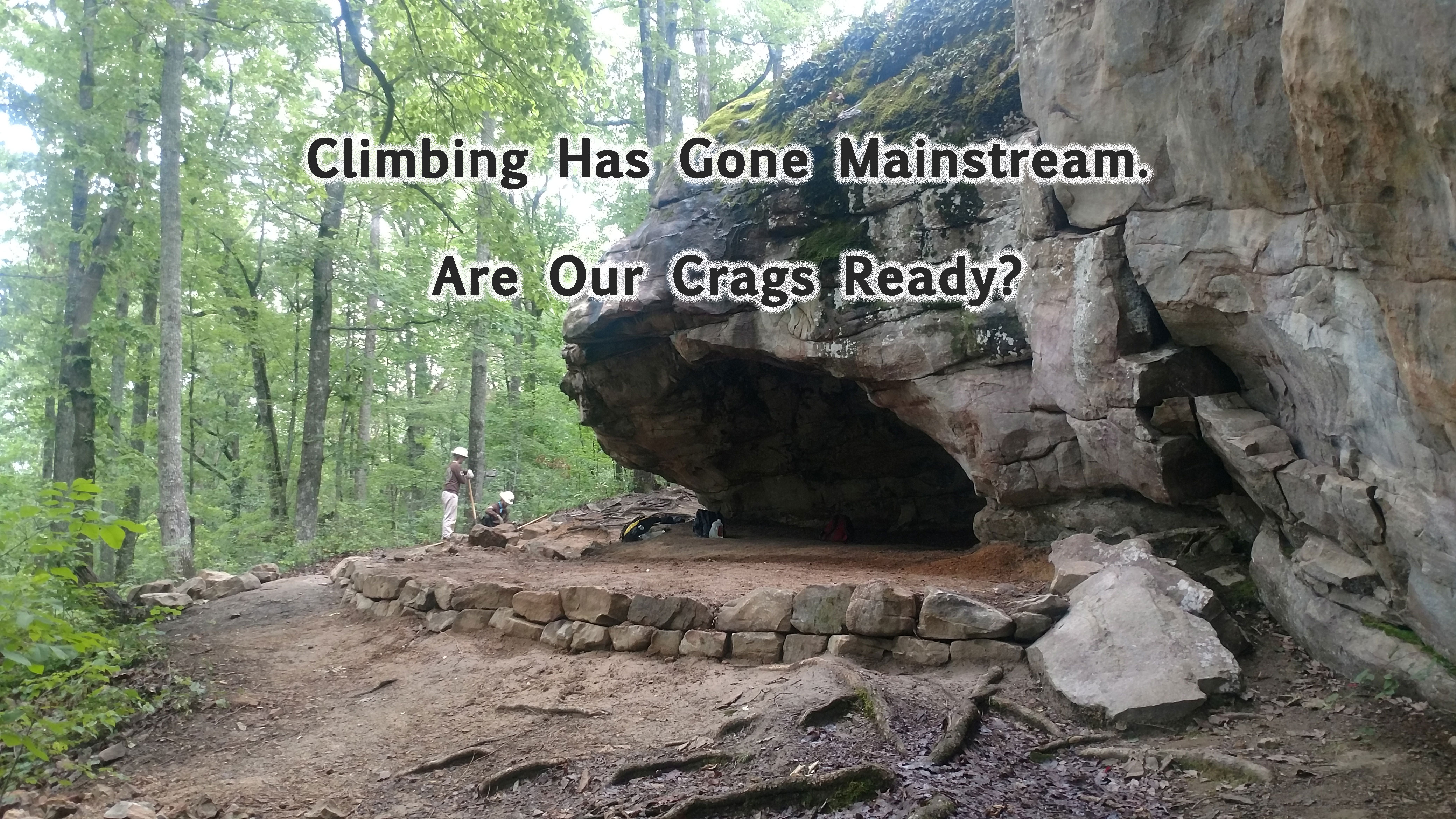 In 2018, a record 50 new commercial climbing gyms opened their doors in the United States, up from 43 the year before. Continued growth in the industry seems all but inevitable. In the last several years, average Americans have gotten unprecedented exposure to the sport, from Alex Honnold accepting an Oscar to President Barack Obama tweeting his congratulations to Tommy Caldwell and Kevin Jorgeson on their first free ascent of the Dawn Wall.

And if snowboarding—a one-time fringe pastime that exploded in popularity and became a mainstay at ski resorts everywhere—is any guide, climbing’s debut appearance at the 2020 Olympics will only drive more people into the sport. (Snowboarders first competed in the Olympics in 1998 in the midst of an incredible growth spurt that drove participation numbers from 7.7% of all visits to U.S. ski resorts in 1991 to 32.6% by 2010.)

We climbers, at least those of us who have been around more than a few years, love to bemoan this trend. In online forums, at the base of crowded crags, or over post-sending beers, we lament the sport’s growth.

It’s time to stop our complaining.

“We can sit back and complain, which I don’t think is the right course, or we can come together as a community and plan for the future,” said Chris Winter, Executive Director of Access Fund.

Access Fund, a national nonprofit advocacy organization that protects America’s climbing areas, sees the growth of our sport—indoors and out—as an opportunity.

“We think it’s cool that there are so many new people getting into climbing. It’s such a great experience, and we want to share it with more people,” Winter said. “And every person who gets into the sport is another person who wants to take care of our crags—who is inspired to take care of other wild places.” 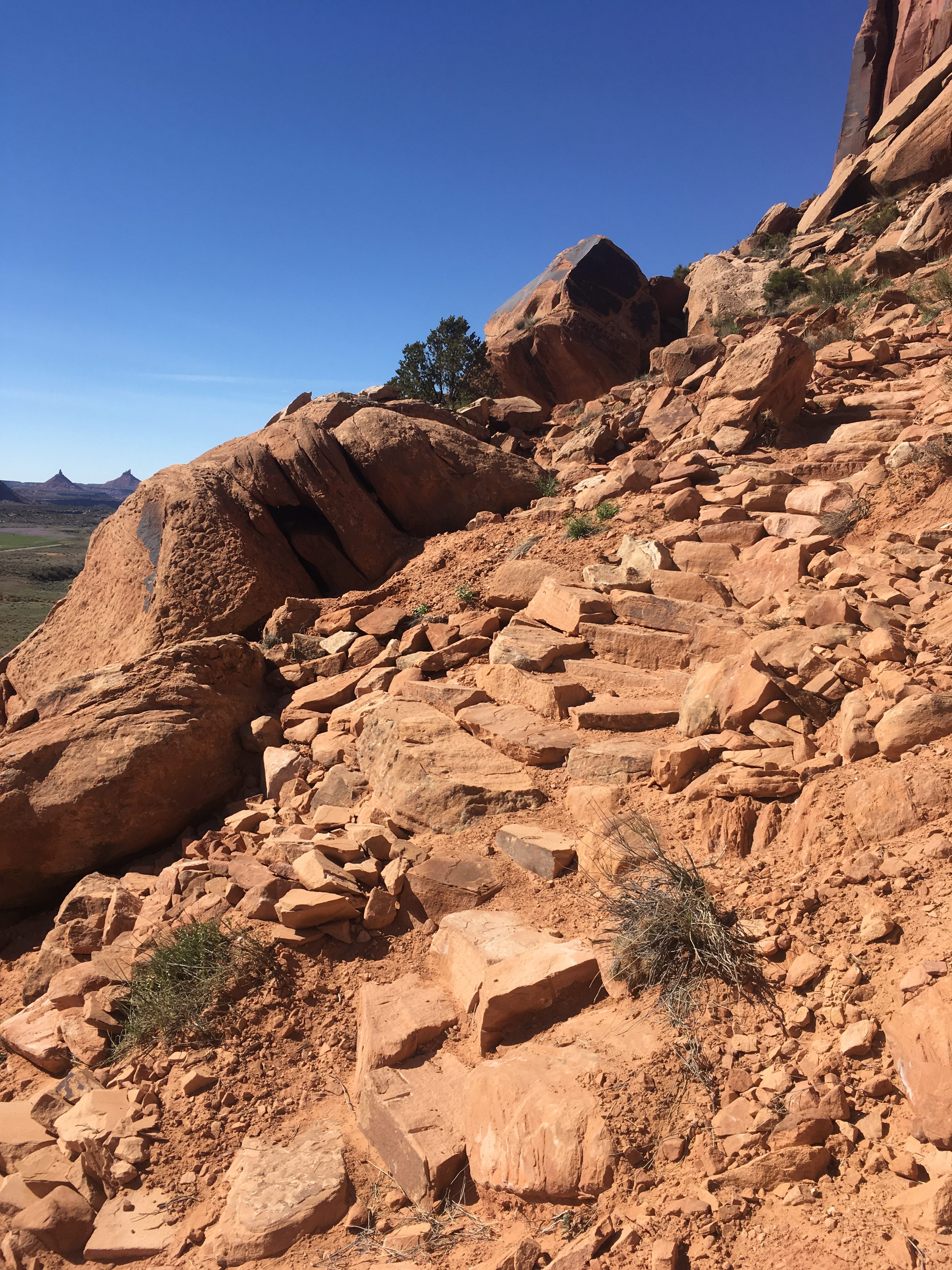 A staircase on a climbers' access trail in Indian Creek, Utah.

Taking care of our crags in a more crowded climbing future will look different than it has in the past. While steep social trails, sloping staging areas, and the occasional cathole dug in the woods for bathroom emergencies were all workable enough strategies when climbers were fewer in number, they can’t withstand today’s ever-growing crowds.

The crag of the future needs to have recreation infrastructure in place that can hold up to heavy use. This is why Access Fund is putting more focus on large-scale projects that address crag stewardship holistically, from the parking lot to the descent trail and everything in between.

While Access Fund staff can tick off the advantages of this kind of integrated crag management—it’s easier to fundraise for a complete vision, you don’t have to negotiate approval for many smaller projects with land managers, and it takes into account protection of all the area’s valuable resources, for example—they also get pushback from people who think the new infrastructure just invites more use.

“We’re not building it so more climbers come,” said Access Fund Stewardship Director Ty Tyler. “We’re doing this because they are already here.”

Still, Tyler acknowledges that the work, which can include building stone staircases or creating platforms for belaying, can feel industrial when it’s underway. “People have personal connections to these places and when construction happens, it changes what folks have been accustomed to. It can look like an industrial construction site,” Tyler said. “But after a season or two these areas heal, plants regrow, and surrounding resources are protected for the long term.”

Protecting resources, not just climber access, is a major part of this approach. In fact, the ease of access for climbers (who are in most cases perfectly capable of slogging straight up an eroding goat trail to get to the cliff) is not the priority. Instead there are broader goals, including the protection of plants, wildlife, cultural artifacts, and water resources. A plan that includes all of these facets also demonstrates to land managers that climbers understand the big picture of conservation, which helps build important alliances that can ultimately keep climbing areas open to climbing. 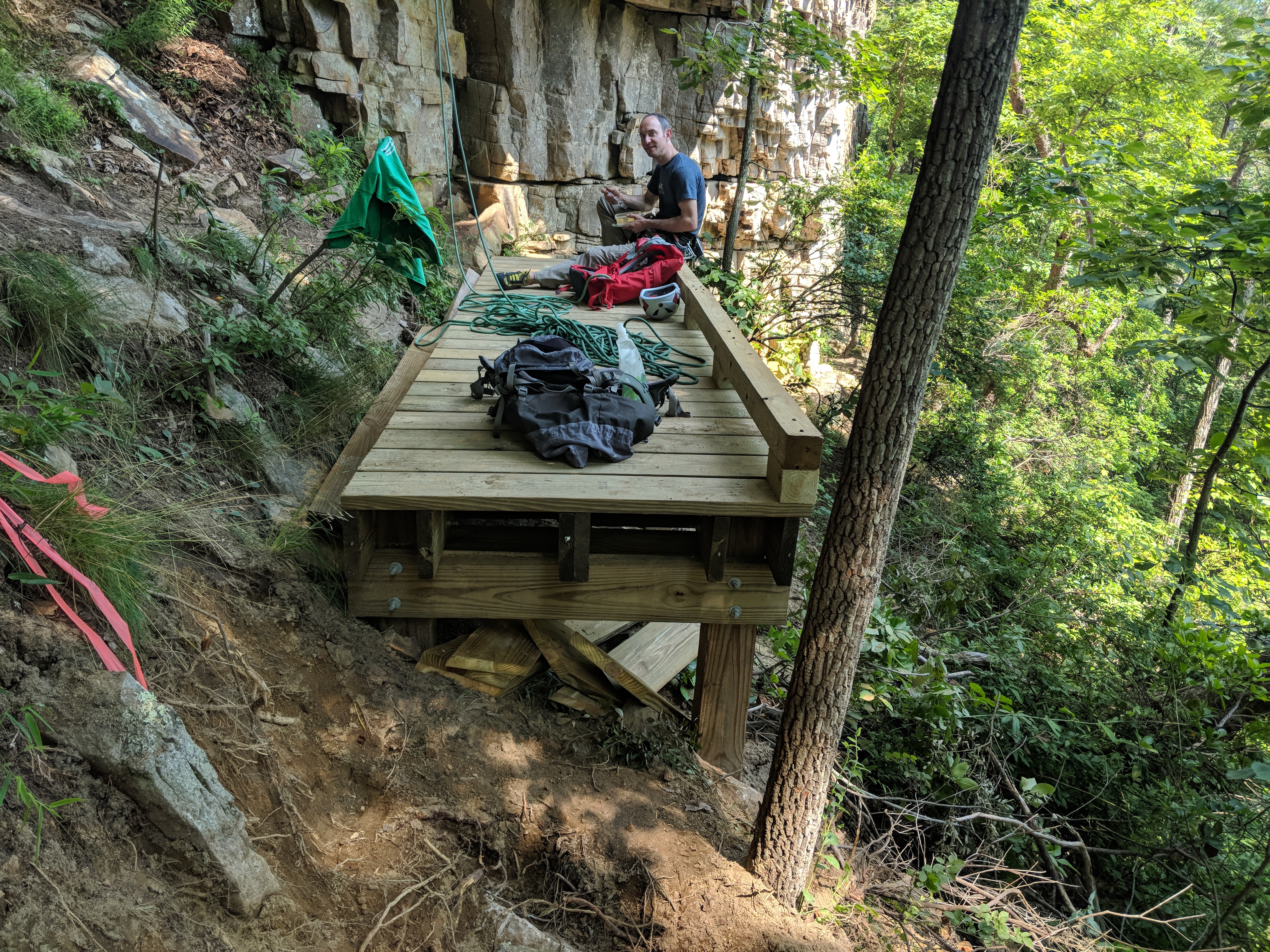 Denny Cove platform: This photo was taken at Denny Cove, in Tennessee, and is a brand new climbing area that Access Fund and Southeastern Climbers Coalition opened in 2016. This photo shows a belay platform built by the Access Fund-Jeep Conservation Team above a watercourse, giving climbers a safe and dry place to belay while protecting the surrounding ecosystem from erosion and rapid degradation.

These large-scale crag projects, however, are not the answer for every climbing area.

“We’re not trying to impact the backcountry experience—those more remote areas that offer solitude and adventure,” Winter said. “We’re talking about the front country and those really popular crags.”

Little Cottonwood Canyon, on the outskirts of Salt Lake City, is one such popular crag. It’s also an exemplar of the kind of infrastructure project Access Fund sees as part of the future. People have been climbing in the canyon since the 1960s, but as the sport exploded so did the number of climbers visiting the area.

The Salt Lake Climbers Alliance (SLCA), one of the country’s many local climbing organizations stepping up to take care of their backyard crags, mobilized to address the resulting strain on the area’s natural resources. The group created one of the most sustainable climbing access-trail networks on Forest Service-managed lands in the nation. They also maintain hardware on the routes and harden staging areas to withstand increased use.

Julia Geisler, executive director of the SLCA, says these kinds of projects require a holistic mindset.

“You have to look at the whole picture. You start at the parking area and the trailhead and the bathroom. Then you get to the trail and the staging area,” she said. “Finally, there’s the route, but you also need to think about how you’re going to get back down to your pack. We need to be thinking about the whole climbing system when we steward these areas.”

The project in Little Cottonwood is the kind of high-quality work that requires the guidance and craftsmanship of skilled experts, and experts cost money, making donations along with volunteerism an important part of effectively stewarding climbing areas. But will there be enough climber support to foot the bill?

That’s where all these new climbers become an opportunity. Winter believes the continued growth of climbing means increased support for this kind of work—and for conservation in general.

As proof, he points to the recent passage of a far-reaching public lands bill in Congress earlier this year. Among other things, the new law permanently preserves an 1.3 million acres of wilderness in the West. When the bill was being debated on Capitol Hill, Access Fund was able to generate 10,000 letters to Congress in support of its passage.

“Our growing community can be rallied in support of public lands protection,” he said. “A lot of people are really fired up.”

With the inevitability of more climbers, it seems obvious (if it wasn’t before) that protecting and stewarding as much public lands as possible is a large part of the solution. We can all help. Step 1: Stop the excuses. Step 2: Get involved with the community.*

*Cruise on over to https://www.accessfund.org, or visit the website of your local climbing organization, to learn how. 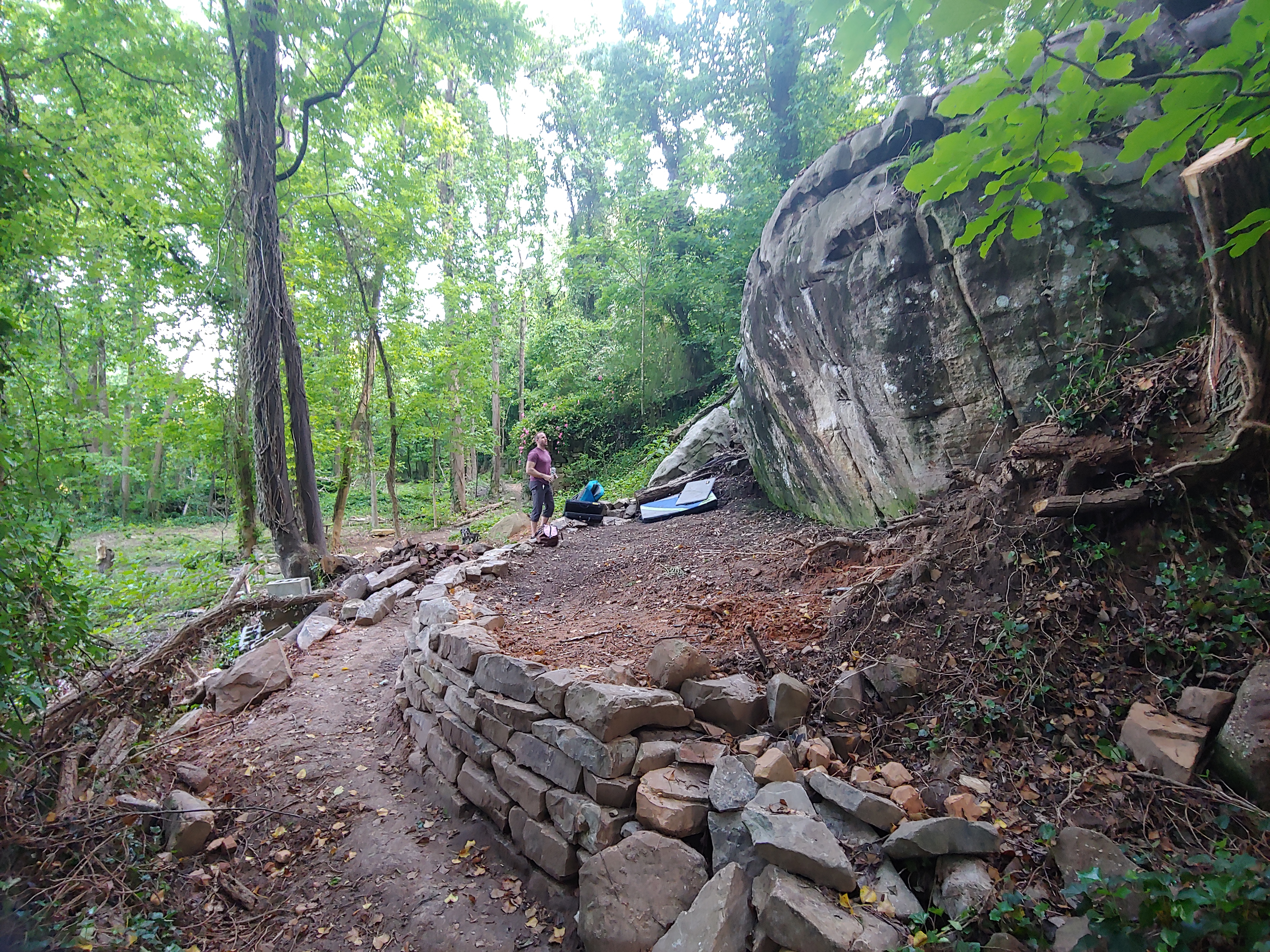 • Old Wauhatchie Boulders, TN: This is a new urban bouldering park in Chattanooga that Access Fund helped open in 2017. The landowner, a local land trust, required Access Fund to make the bouldering area sustainable before they agreed to open it to the public. This photo shows the work of the Access Fund-Jeep Conservation Team to level and harden the landing zone under the boulder, helping to protect the area from erosion and make it sustainable for climber visitation. Prior to this work, it was a muddy, viney slope that would have turned into a mud hole and been no fun to use.

1 thought on “Climbing Has Gone Mainstream. Are Our Crags Ready?”