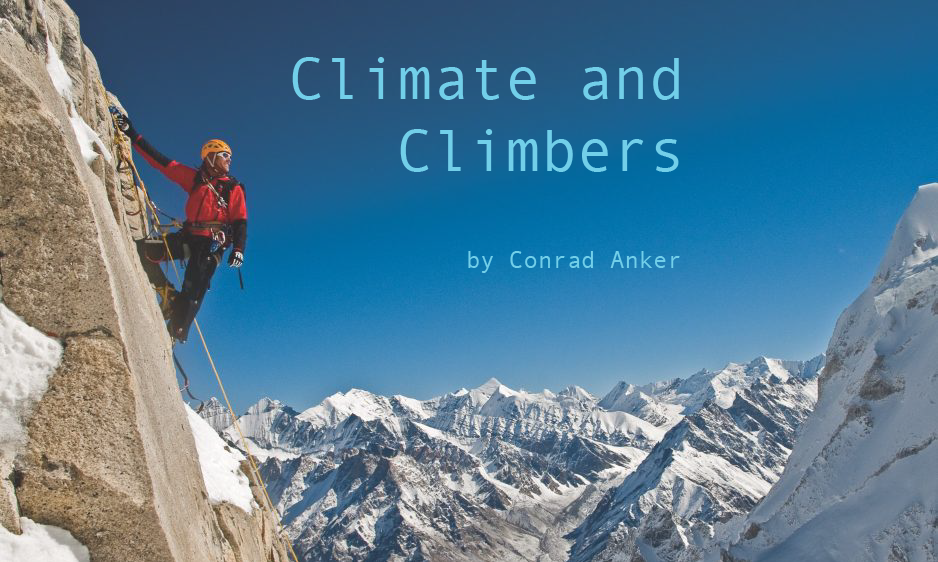 This feature appeared in Rock and Ice issue 251 (July 2018). Only select features from print issues of Rock and Ice appear online. To enjoy the full array of writing and imagery in Rock and Ice subscribe here.
Photos by Jimmy Chin.

We are climbers. If you’re reading this, you have some curiosity about the vertical realm and its nuances, such as knowing how granite, sandstone and limestone climb differently. Our curiosity extends, or should extend, to global climate change. Climbing in the mountains and on the cliffs makes us front-line observers. With receding glaciers, dying forests and ice climbs that don’t form anymore, it is our duty to speak up and make a difference.

Cliffs and mountains are a result of geologic forces in play since the beginning of time. Rock and ice, the mediums we climb, are our direct connection to nature. As a sport, artificial walls excepted, climbing has an elemental connection to time and the geologic forces that create the canvases we seek. As climbing is based on gravity, one of the primary forces of nature, we have a rational view of how things are ordered.

The ambiance of a crag, the view from the summit, and the uniqueness of a handhold are all part of the climbing experience. Take away our safety systems and climbing is a primal way for humans to interact with nature. As climbers and mountaineers, we have history, albeit recent, on the landforms we climb. The 1890s exploration by the Duke of Abruzzi, to Alaska and the Karakoram, among other places, and the photographs by Vittorio Sella of Alaska and the Alps are the first data-based observation of the alpine landform.

In Yosemite, massive rockfall is the source of the boulders we challenge ourselves on. Sierra granite is also deadly. The 2017 event on the East Face of El Capitan is part of the risk we accept as climbers. By combining the historical context and our keen observational skills we, as climbers, have the groundwork for scientific understanding.

As an all-around climber and lifelong student of earth sciences, I’m tuned into the surfaces we climb. Whether we are pulling on ancient gneiss that predates atmospheric oxygen or recently exposed volcanic rock, we intuitively understand the rocks’ geological time. A climber is aware of the transitional qualities of water, as it is the foundation for safety for ice and high-altitude climbing. Time it right and that WI 4 ice pillar is a solid and sticky piece of cake. Miss the window of opportunity and you might as well step in front of a tractor trailer hauling cement. As a community we are, or we should be, fully aware of the environment we live and play in.

[Also Read Under The Weather: Climate Change and the Future of Rock Climbing]

Climate change and global warming are a very real threat to our passion for mountains. I’ll frame this conversation on the fact that we accept anthropogenically triggered climate change. The science behind greenhouse gases was first understood in the 1820s. By the 1960s scientists made the correlation between carbon dioxide (C02) and increased global temperature. The Industrial Revolution began in 1760 with the harnessing of carbon-based fuel sources. In 1751, prior to the Industrial Revolution, the atmospheric CO2 stood at 280 parts per million (ppm). At the time, 700 million people inhabited this planet. In July 2017, with a world population of 7.4 billion, the atmosphere contained 407 ppm of CO2. The last time Earth had this much CO2 was 3.6 million years ago in the Pliocene. Observational data is pretty straightforward. As climbers we get the objective differences between a slick slab and an overhanging off-width. Atmospheric data is equally clear and cannot be dismissed as “alternative facts.”

The summer of 2017 was noted for climate abnormalities that directly affected human well-being and the areas we climb. In the 1980s climbing ice in Utah was reliable, Thanksgiving to Easter. Now Christmas to Presidents’ Day seems to be the norm. The operating seasons of many ski areas are shortened, and rain in the winter is becoming more common. Across the alpine zones, glaciers are receding, becoming increasingly unstable, and certain ice climbs are forming less frequently. An exceptionally wet monsoon flooded Southeast Asia, causing widespread loss of life and property. In the far north, permafrost warmed to the point where vast amounts of methane, a more potent greenhouse gas than CO2, were released. These positive feedback loops will accentuate warming. While these events have happened in the geologic past, the current intensity and frequency are directly related to a rapidly warming climate. In Montana, where I live, the growing season has increased by 12 days a year since the 1950s. The list of climate-triggered change is extensive. The evidence is compelling and something that will affect the sport we love and, more important, affect the world for our and future generations. 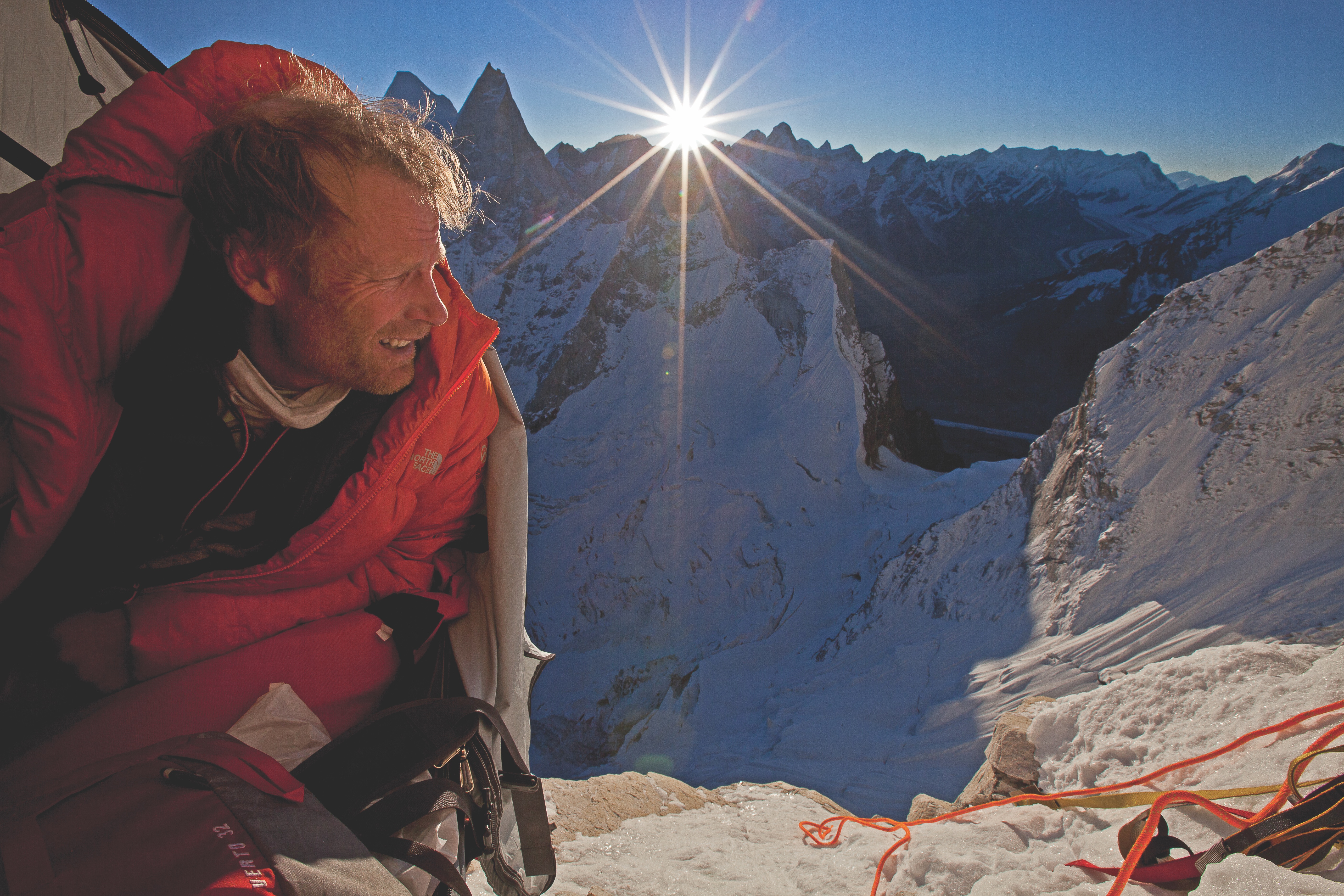 Room with a view, but it comes with an environmental footprint of jet fuel and plastics. As climbers, we can work to offset our impacts—awareness is the first step.
For more information visit Protect Our Winters.

There is a strong probability you and I are citizens of the United States. As Americans we represent 4.4 percent of the world’s population. In 2015, we contributed 14.34 percent of the world’s CO2 output, and contributed 16.1 tons of CO2 per person. I’m particularly guilty of contributing to this mess. I travel in jets. Visiting the Himalaya to climb has a huge carbon footprint. The cams, rope, tents and sleeping bags integral to climbing all have a plastic-based carbon price tag. I consume a stack of resources. I recognize this. Yet the criticism that being part of the problem prevents one from discussing it and working toward solutions is specious. Simply living has an associated cost to the environment.

The cost of doing nothing is higher. In climbing if you “camp out” on the rest, you can lose your momentum, and you might never clip the chains. Stand still for too long in the cold and you’ll freeze. Over grip and you’ll flame out that much sooner. Walking in an avalanche path because it’s clearer has an obvious potential negative outcome. The cost of working against yourself will only make things worse. The benefit of working for yourself by realizing efficiencies is what we as climbers strive for. Our investments in working on technique and training are for rewards in the future. These are the groundwork webuild into our daily lives to make the outcome of what we live for ever so sweeter. We are a strategic bunch by nature.

Given this, climbers and reef divers, who are witnessing coral bleaching due to warmer oceans, are two sports communities that should collectively address climate change. The mountains and oceans are directly affected by global warming and it’s our responsibility to give something back to the places we love.

Climate change is our generation’s tragedy. The atmosphere is a resource we inherited and will pass on. When individual nations act out of self-interest, the resource is compromised. Just as high-altitude climbers work as a team, nations must work together to reverse global warming. With efficiency (the climber’s golden mean), technology (doing more with less) and vision (how we get things done), we can solve this. As with any climb, making a difference will take hard work and dedication.

Alex Honnold dedicated 10 years of his life to free soloing El Cap. Margo Hayes and Adam Ondra both sent hard routes with vision and a singular pursuit of an identifiable goal. To climb Meru, I dedicated three expeditions over eight years for a single summit. You have your personal goal, one that gives you drive and purpose. These aspirations motivate us to climb. Collectively speaking, climate change is our big challenge. The “summit” of climate change will require a multi-generational effort.

What can we do? First step is to recognize the challenge we face. Second, we need to communicate our concern to our elected officials. The Paris Climate accord is a step toward minimizing temperature increase. The United States, as a world leader in technology, needs to be part of this. Being the only nation not a signatory is, by my value set, shameful. Urge your community to adopt the standards set in the Paris Climate accord. Advocating for renewable energy is a step in the right direction. Remarkably, it also makes sound business sense. We get how enthusiasm from our squad at the base of a climb makes a difference. In the same manner we need to be there for our fellow climate advocates. Support long-term sustainability in media— it’s the equivalent of shouting “venga” at the crux move. Climbing is based on teamwork. The same applies to climate change. Be a leader in your local community. Partner with Protect Our Winters and 350. org, two national organizations on the front line of addressing climate change. Follow the NASA climate change website. Calculate your car- bon footprint. Knowing where you’re at is the first step toward constructive change. Find a carbon-offset program that fits your budget and lifestyle. Strive for efficiency. Even a small improvement added to the overall picture makes a difference—a two percent increase in strength is often the difference between a send and almost. Let your voice be heard at the polling booth. Voting is your responsibility. Support candidates that have a realistic stance on climate and the environment, and engage with elected officials who ignore science. Apply what climbing and a life in nature have taught you.

As many market and environmental economists have noted, such as British economist Nicholas Stern, the costs associated with doing nothing will be much higher in the future than if we invest today to make sure we have sustainable programs in place. It’s up to you to be part of the solution.

Conrad Anker, one of America's most accomplished alpinists, has completed first ascents all over the world. Notable was his 2011 ascent of Meru's Shark Fin with Jimmy Chin and Renan Ozturk, as captain of the North Face Athlete Team.