Words and photos by Ben Herndon

Mike Bockino was sleeping in his car at the Riggins camping area when the Sasquatch ripped open the door. Sightings of the mythic man-beast are common in this neck of the woods. Bockino screamed for his life until he realized he wasn’t being eaten or mauled … just dry-humped.

The Sasquatch was actually Brian “Ray” Raymon, a climber from Spokane, saying hi.

“He gets his ideas for jokes from his job as a public defender,” Bockino says, reflecting on the traumatic incident. “Thank god for the high-loft down between us.”

Riggins is a theater of eccentric and colorful personalities, and a backwater Northwestern sport-climbing destination known for its rather controversial routes.

Three and a half hours north of Boise, Idaho, and hidden within the sub-alpine forests of the Seven Devil Mountains, the Riggins crag is eight miles from the sleepy river town of the same name. Perhaps its remote location allowed Riggins to quietly become one of the more heavily manufactured areas in America.

Riggins rock, a type of limestone called accreted terrane, is fine, pale and steep. There are over 100 routes, ranging from 5.8 to 5.14, on two walls: the overhanging Amphitheater (aka the Cave) and the more moderate Projects Wall just up the road. The rock here once comprised a reef out in the Pacific Ocean, which eventually moved along the Pacific Plate and collided with North America. Now situated at 5,000 feet, the area is the go-to sport crag for southern Idaho in the summer.

In the early 1990s, frustrated with the 100+ degree seasonal temps in Boise, a motivated group of climbers, led by local Jeff Landers, scoured the city’s surrounding hills, hoping to find something steep and shady.

“You couldn’t just look on Google Earth like you young guys do now for boulder fields,” Landers explains. “We got a tip from a caver at IMT [Idaho Mountain Touring, a gear shop] in Boise and had to hike all over the place looking for this. I even took a geology class at BSU [Boise State University] to learn more about it.”

Bushwhacking up a drainage in the spring of 1991 Landers came upon this overhanging amphitheater of virgin stone. Development continued all year, with Landers, Mark Edmundson, Tedd Thompson and Matt Fritz contributing most.

Now, 20 years later, the locals have installed some 30 routes in the Cave, and 70 more at the upper Projects. From warm-ups like Shiver Me Timbers (5.11a) to testpieces like The Maddening (5.14b)—one of the few natural routes in the cave—there is a quality climb at practically every grade from 5.11 to 5.14. A vast majority of the routes, however, have drilled or manufactured holds of some sort. 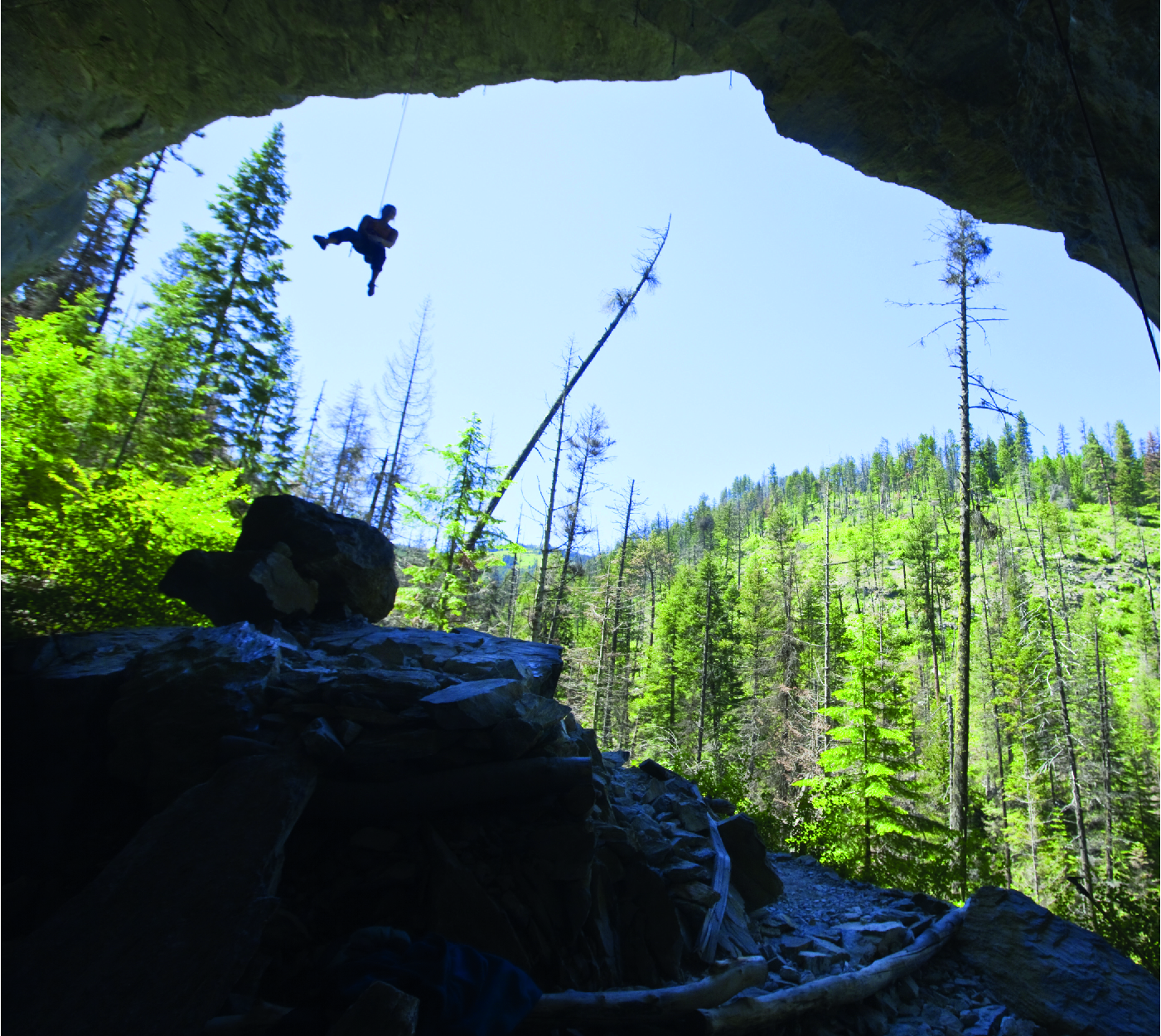 Joe Kinder lowers Colette McInerney off the anchors on Tractor Girl (5.13a) at the Cave.

“They simply employed new tactics to the steep, blank walls of
the amphitheater,” Bockino said. “And to [the developers’] credit, they maximized the amount of climbing that could be done in that cave. Without chipping, there would be three, maybe four routes there and they would all be 5.14+, if possible at all.”

Landers is of the opinion that the cave would be unclimbable without drilling.

During the 1980s and 1990s, in areas like Buoux, the Verdon, the Frankenjura, Smith, Mount Potosi and Mount Charleston, routes were being developed in a similar fashion.“We came back from Europe seeing that people there were making climbs where there were none,” Thompson says. “People wanted routes to climb, and we didn’t have the luxury of being on an endless road trip. We had a tiny cave in central Idaho with little to no features.”

Landers and other early developers of Riggins have taken some flack from climbers over the years, but he responds to criticism with: “I found it and I can do whatever I want.”

“I won’t condemn [chipping],” says Bockino, who manages the Boise Front Climbing Club. “The amount of hours that it takes to hang in a harness and drill all the holds on an 80-foot overhanging route is mind-boggling."

"Do I wish that some of the routes in some places weren’t chipped? Yes, but I also get pretty angry when people simply pass judgment on the area because on 8a.nu you have to check the ‘poorly/mainly chipped’ box. I think for some cases there should be an ‘amazing/well thought-out chipped’ box.” 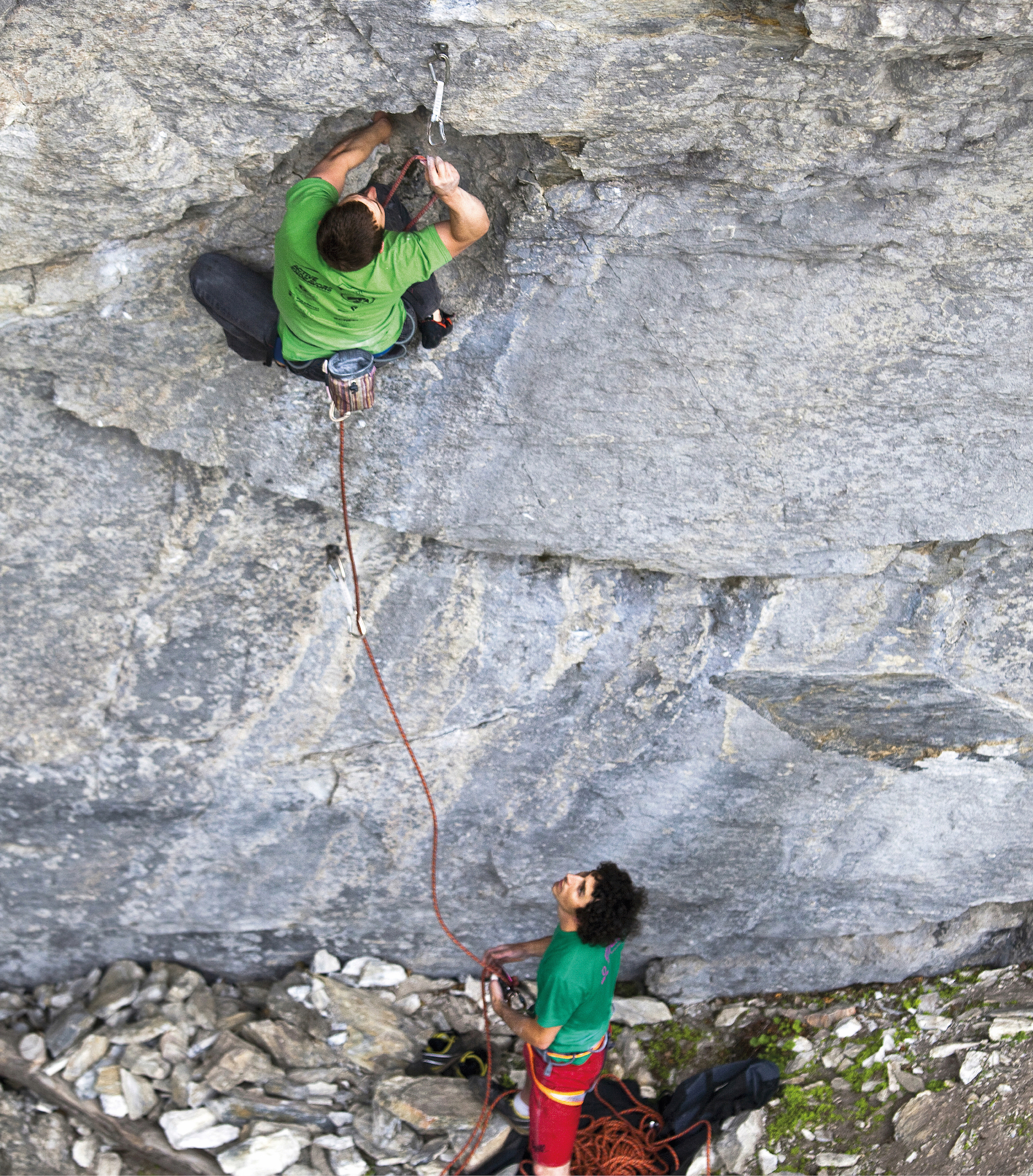 Adam Bradley and Mike Bockino at The Amphitheater.

Today you’ll see an interesting, perhaps hard-to-reconcile situation where climbers travel to Riggins from Boise and as far north as Washington to enjoy the challenges presented by the steep, physical climbing. If pressed, most of these people are unenthusiastic about the chipped holds. But they still climb here because these routes are consistently fun and challenging in the 5.13 grade. It begs the question: Does the end result of having an accessible climbing area that many people enjoy justify the means?

The locals maintain that it does. “If chipping in the cave had never happened, none of the natural routes would exist,” Bockino says. “It would be one 5.14b in a
cave with no warm up.” 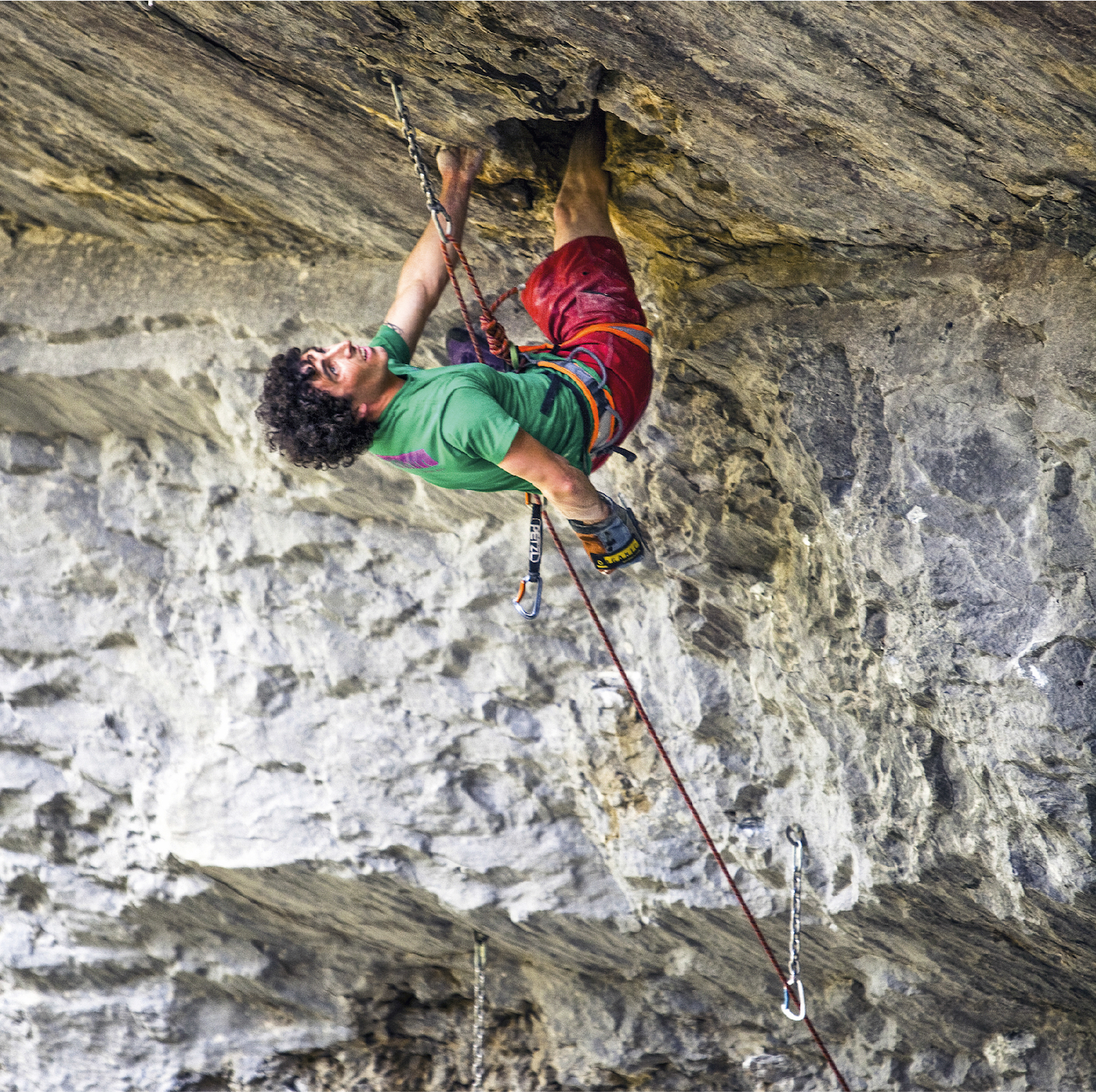 Riggins still occasionally draws criticism and isolated boycotting, often by climbers who either aren’t physically able to climb there or are traveling athletes able to frequent prime destinations. But the underlying vibe among the dedicated Riggins locals isn’t centered on tension or ethics. It’s about community, getting strong and sharing a round of PBRs in the afternoon.