5.10 doesn’t always get the respect it deserves. In fact, some climbers might tick one off early in their climbing careers. A gym climber might even get up one the very first day. However, certain routes out there make you realize that mastering this grade takes dedication. The Cruise in the Black Canyon is one of those routes.

Dave Marcinowski and I were college buddies, going to Western State in Gunnison, Colorado, and we chose The Cruise as our first Grade V. We wanted something proud, and this Layton Kor line, with its nearly 200-foot 5.10 offwidth followed by two more 5.10+ pitches, screamed proud. Several of our friends had climbed the Scenic Cruise, a more reasonable and popular variation that skirts the offwidth. We chose The Cruise to see if we had mastered the 5.10 grade.

The Black Canyon is always an intimidating place to climb. The rock can be suspect, runouts are common, and the low roar of the river often impedes communication. When something
unplanned happens, it gets even more terrifying.

“A rope, a rack and the shirt on your back” is a Black-Canyon mantra attributed to Jimmie Dunn and Earl Wiggins, who established many classic lines in the area in the 1970s. Dunn and Wiggins made the first free ascent of The Cruise in 1976. Today’s true Black Canyon aficionado stays true to the spirit of the early pioneers, and tries to climb the routes in long, satisfying single-day pushes. But this maxim also encourages some climbers, like us, to get in over their heads.

Climbing a route in the Black Canyon demands proper preparation. Dave and I broke that rule to start, slacking off the evening before the climb by watching the World Series, drinking Red Bulls, and then driving to the Black late into the night, dodging wildlife on Highway 92.

In the morning we stumbled down the Cruise Gully, already dehydrated, trying to avoid the poison ivy that guards the approach.

We simul-climbed the 5.8 start, then I entered the offwidth. The water bladder, foolishly still on my back, spilled out on my feet.

I must have spent two hours struggling up that offwidth, and felt like puking when I arrived at the belay. Dave stemmed delicately through the crux 5.10+ corner, which takes hard-to-place tiny nuts and small cams. The pitch finishes when you punch through the runout 5.9 face moves on pink pegmatite with no protection but an old Star Drive bolt Kor himself must have placed over 40 years ago. 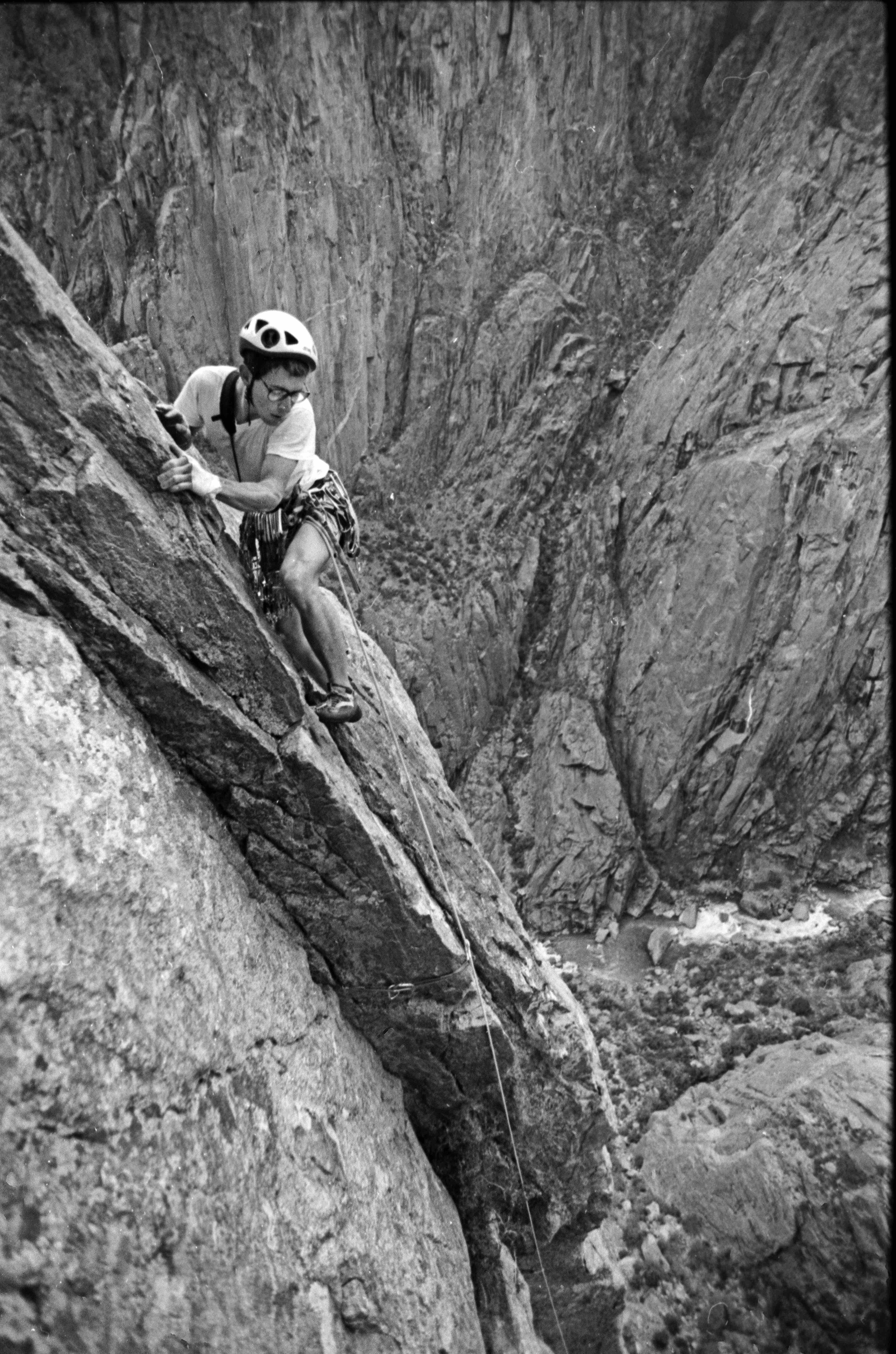 In the Black Canyon 5.10 is usually a real adventure. Photo by Corey Rich.

We reached the belay ledge where the Scenic Cruise joins The Cruise, a 5.10+ overhanging finger and hand crack that would be a classic pitch anywhere. It was my lead again, I was fully dehydrated, and my arms were still pumped from the offwidth. Although I’d led a hundred or so pitches of 5.10 elsewhere, I simply couldn’t do this one. I hung on a piece, lowered and sent Dave up.

Dave was spent and he hung, too, but eventually arrived at the belay. The short October day was getting away from us. On my lead, I got off route before figuring out where to go. It was now getting dark. At sunset we made it to a small ledge, and weighed our options. Since there were no fixed anchors and we only had one 60-meter rope, bailing would take several hours and half our rack. We spent a cold, sleepless night on that ledge, shivering with the ropes wrapped around us. We’d failed miserably, but managed not to get upset with each other. When morning finally came, we climbed the remaining 700 feet without food or water.

"Certain climbs make you realize that mastering 5.10 takes dedication. The Cruise in the Black Canyon is one of those routes."

I love climbing, and though I realize I’ll never reach an elite level, that day on The Cruise motivated me to at least always be able to climb 5.10. I took a few steps back and climbed some routes I should have before attempting The Cruise, such as Journey Home (5.10) and the Scenic Cruise (5.10+). I climbed all the 5.10s and 5.11s I could find at my local crags in Gunnison, and traveled the country, dirtbagging and dedicating myself to climbing 5.10 trad. I spent a season in Joshua Tree, climbed classic long routes in Red Rocks, Zion and Yosemite, did countless splitters in Indian Creek.

A decade later I made it back to The Cruise with my friend Dave Ahrens. We stayed in the campground, got a good night’s sleep, and descended the Cruise Gully by headlamp.

Pitch by pitch the route went smoothly. I led the offwidth and still got a little scared when we were forced to simul-climb because our belay was not high enough, but that overwhelming fear from 10 years earlier never returned.

I also led the crux corner, wiggling in the tiny wires, and getting cams when I could. When we arrived at the small ledge where I’d bivied a decade ago, it was barely afternoon. After 10 plus years of paying dues, I got the sense that I could finally call myself a solid 5.10 climber. And this time, we cruised on.

Luke Mehall, 34, is the author of Climbing Out of Bed, and the publisher of The Climbing Zine. He lives in Durango, Colorado, where he is at work on his second book, The Great American Dirtbag.

The Cruise is on the North Rim of the Black Canyon. Turn off 92 just south of Crawford, following signs to the Black Canyon. This road is closed in winter and typically opens in late March to mid April. At the campground entrance, sign a wilderness permit, and register on the sign-in board.

This is a typical Black Canyon climb. You build your own anchors and fixed gear is minimal. The signature offwidth pitch is long, so belay close to the base. The crux corner requires small nuts and cams. Several pitches described in the topo from Black Canyon Rock Climbs by Robbie Williams can be combined. This wall is scorching hot in the summer. Spring and fall are the best seasons.

Hike down the Cruise Gully (west of the campground), making two short rappels (ropes are usually fixed by the Park Service). Be sure to wear pants and a long-sleeved shirt to avoid exposure to poison ivy and ticks. Look for a large flat boulder that marks the start of The Cruise and the Scenic Cruise.

Double set of cams (gray TCU to #3 Camalot), nuts, slings, cordelettes, and up to two each #4 and #5 Camalots for the offwidth. One 70-meter rope is recommended.