Crush It! Improve Your Pinch Strength

With sloper strength and pinch strength linked, as most slopers require use of the thumb, many climbers are weak in both. Get pinch strong with Mr Gresham. 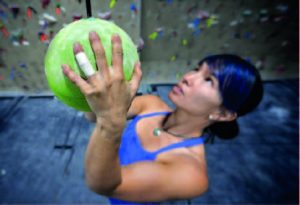 Pinch strength is hard to gain and easy to ignore … until you need it, like I did trying to climb a new 8c+ at Malham last year. The top bulge featured a hideously flared open-handed horror-pinch that stopped me in my tracks … until I went away and trained specifically. The next year I returned to finish the job.

While elite boulderers seem to be able to crush the most marginal sloping features, many sport and trad climbers lag behind in this respect, and favor routes and problems with incut holds. With sloper strength and pinch strength linked, since most slopers require use of the thumb, many climbers are weak in both. Conversely, training in either improves the other.

Unfortunately, few hangboards cater effectively to pinches, but the good news is that more and more gyms are offering large slopers and volumes, the kind used in World Cup coursesetting. An array of additional exercises and some simple and inexpensive training devices will enable you to practice at home or at work, when you should be doing something more responsible with your time.

Start your program with a pinch-strength diagnosis. Check your abilities and weaknesses with these steps:

Wide, medium or narrow? Assess your pinch strength on all three options, as you may be better at one or the other. Use pinch blocks, deadhang rigs, or some of the set-ups described below. It’s hard to quantify this process precisely, but you should get a sense of when one size feels notably tougher than another.

Deep or shallow? Similarly, as soon as you start experimenting, it will probably become clear if you are better at pinches that only reach the first finger joint, or those covering the full depth of your fingers.

Thumb or finger strength? Clearly, the thumb is the dealmaker for most pinches. Some climbers will naturally have strong thumbs, and some will have strong (or weaker) fingers.

Linking with the above assessments, you can attempt a more in-depth analysis of finger strength to determine which grips may be inhibiting your pinch strength:

Next, these other aspects of body strength may come into play:

• Wrist strength: a major component for using pinches on vertical and gently overhanging walls (when the wrists are often bent).

• Strong core and shoulders: while these muscles lie further down the chain and are not specifically involved in gripping, you are likely to have trouble using pinches—especially on overhangs—if your core or arms are weak.

Practice regularly—say, two or three times a week—and only train when you feel recovered and fresh, such as after warming up at the beginning of a session. Always warm up before any of these.

Spend the first half an hour of the session working on one or two projects that feature mainly pinches and rounded holds. Rest for 10 or 15 minutes, and move on to one of the following exercises (on pinch balls or blocks), but never spend more than 45 minutes total on only pinches.

System boards are steep woodies with holds grouped into themes and arranged in symmetrical ladder tracks for structured training on specific moves or grips.

Make the first objective of the session to spend time on pinches. Intermediate climbers might spend up to 30 minutes and elites 45 minutes on them before moving on to the next type of grip or move. Use a weight belt to calibrate the intensity, and try holding static positions as well as moving dynamically. If your board lends itself, try several different types of pinches within the given time frame, seeking variety in:

Modern campus boards often feature ladder tracks of half-round balls, to use either as slopers or pinches if you turn your wrists slightly. Some boards may also have pure pinches, which lack tops and force you to use your thumb and squeeze.

The basic laddering exercise will be most effective and practical (it’s unlikely that you’ll be able to do double dynos or anything else too crazy). See the protocol given for campus boarding (see Campus Board Training, rockandice. com), but your essential plan should be to go for two to six moves/reps, and take two minutes rest between sets, with elites doing six to eight sets per grip and intermediates doing three to six sets.

Very few hangboards address pinch training well, and there is much debate about whether deadhanging is a safe and effective method. Drawbacks include that most deadhang setups will allow you to compress (squeeze your hands toward each other), which will mean not engaging your thumb effectively. On diagonal pinches, friction from the little finger can reduce the desired loading on the thumb.

Another concern is that vertically oriented pinches may involve a risk of injury: De Quervain syndrome may be caused by overuse of the thumb when the wrist is bent acutely. You may resolve this issue by creating a specific deadhanging rig that enables you to pinch without flexing the wrist, such as by using wooden pinch blocks screwed into the underside of a beam or pinching the beam itself. Aim for a selection of different sizes (wide, medium and narrow), and position the holds closely (with spaces slightly narrower than shoulder width between them), or you may end up compressing rather than pinching.

Calibrate the exercises to hit failure between five and 10 seconds, and rest two minutes between sets, with elites doing six to eight sets per grip and intermediates doing three to six. Note that while these types of setups allow you to train the thumb and fingers effectively, you won’t be training the wrist, so perform separate sets of wrist curls, with the forearm on its side and thumb pointing upward.

To eliminate the compression element from deadhanging on pinches, string up some pinch balls, which will simply wobble if you try to squeeze! These rigs are portable and can also be good for general pull-up training. The only snag when pinch training is that it always feels tempting to cheat and use too much assistance from the tops, so give yourself only minimal help. Wood devices are kinder on the skin, but resin can also be worthwhile. Use the protocol for reps and sets given for deadhanging. Diameters vary from 3 to 5 inches, and various commercial brands are available, from Metolius, Atomik, Lapis, Sports Supplies, and Escape.

These rigs are highly recommended for fixing a weakness in thumb strength. There are various mutations, most of which involve parallel-sided or sloping wooden blocks that are drilled out and threaded with cord attached to a weight. Most designs are fairly portable for on-the-go training (you can attach them to a heavy bag if you don’t have access to weights). Heavy rocks with sloping tops or large weights may fulfill the same purpose, if a little crudely. Use the guidelines for reps and sets given for deadhanging.

Developed by Adam Ondra in collaboration with the Czech company A Muerte for specialized pinch training, Claspers are hanging training plates to use when traveling or as a complement to hangboards. You can choose from four claspwidths and two types of surface, high or low friction. The adjustability allows you to train specific weaknesses or for fully versatile pinch strength.

The British all-arounder Neil Gresham has climbed 8c+, trad E10 (5.14X) and WI 7. He has been coaching and writing about training since 1993. See his book Training, How to Climb, from Rock and Ice at your local retailer or gym. 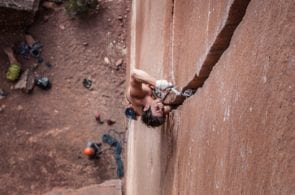 Ahhh the ol’ gear-placement pump. Find out how to best set yourself up to avoid it! 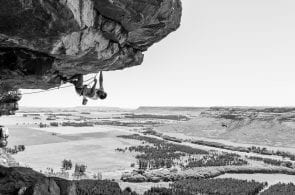 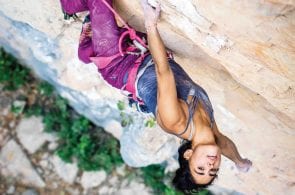