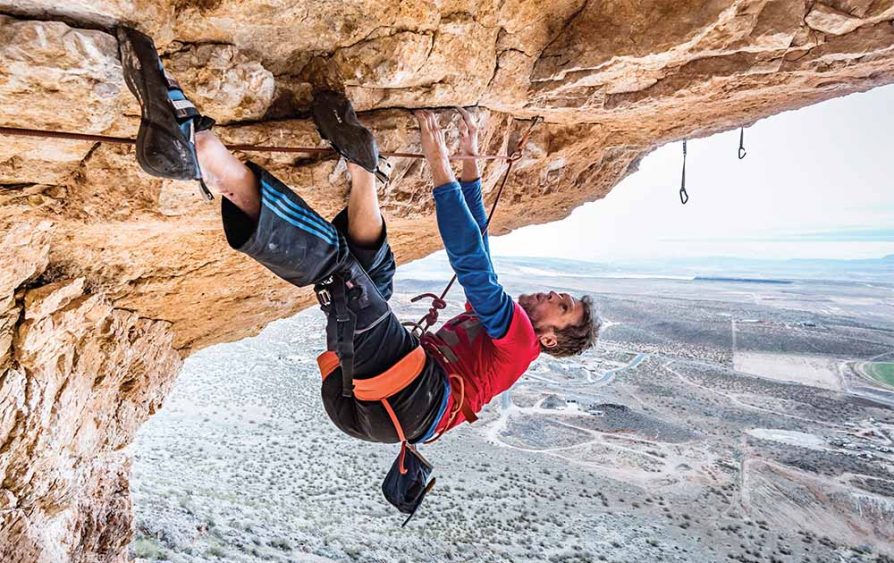 June 9, 1990. High on Denali, Chuck Odette staggered through a whiteout on the descent from the Cassin Ridge. A pair of Japanese climbers materialized through the flurries, having become lost while descending the West Rib. One man’s feet were frozen, and the other was vomiting blood. Odette and his partners guided them down the mountain to Camp III, at 14,400 feet. Odette had barely arrived in Camp III when a ranger beckoned him into a tent to say that Mike Koshuta and Stuart Jones, acquaintances of Odette’s from the mountain, were missing. A search plane found them later that day, dead after a 3,000-foot fall off the South Face of Denali. Odette had dreamed of the high mountains, including K2, for years, but that day, at 34, he pulled the plug on his alpine career and turned to a new fad called sport climbing. In 1994, Odette redpointed his first 5.12. Now 61, he has climbed 1,000+ lines at or above 5.12, including over 240 5.13s and nine 5.14s, and at age 56 completed Morphine, his first 5.14b. Since March of 2016, he’s completed 21 rigs at or above 5.13a, eight of them harder than 5.13b. In 2015, Odette retired from his longtime job as Petzl’s event- and athlete-sponsorship coordinator. He and his wife, Maggie, 47—who sent her first 5.14a at 40 and has finished 38 5.13s—dropped most of their possessions and began traversing America on a five-year sportclimbing road trip. They will spend the summer near Ten Sleep, Wyoming, where Odette plans to project Haymaker (5.14a) and Joe Daddy (5.14a/b).

What’s it like to be climbing your hardest after 60?

My wife says I have a genetic freak component. I think I rely on a few things, but the first is denial! When I was 12 or 13 a doctor told me I would never be athletic—I had pneumonia a lot and missed almost all of second and fourth grades because of mumps and rubella—it made me try even harder.

In a way I am: If I can do it, you can do it. We’re all human beings, 99.98 percent DNA compatible, and there’s no reason why you can’t be successful, if not more so.

How do you stay fit?

I watch successful people and see if what they do works for me. Before I met my wife I hadn’t done yoga—it turned out to be the perfect rest-day activity. Probably the key has been nutrition. I follow the Zone diet [30 percent protein, 30 percent fat and 40 percent carbs]. No gimmicks.

Any other climbing secrets?

Work your weaknesses. The real challenge is assessing them truthfully. Our egos prefer we show off our strengths. Maggie and I suck at pure power, so we boulder for three months each year, powerful movements only. Most important, detach yourself from the outcome, and remove preconceived notions. Learn to let go. At this age, I’ve accepted that prepping my muscles takes a little longer, and [that] I must rest between climbing days to redpoint hard routes.

You developed the Coliseum Crag, in Idaho— now a quarry. Frustrating?

The overhang is as big as any cave in the U.S.! I climbed 22 routes there, but I always knew it could get shut down and accepted that it was like Buddhist sand art … Besides, I’m not convinced it’s gone forever! Could be 100 years from now—I used stainless steel bolts.

Ever have young climbers watch you send?

That actually happened at the Red River Gorge. A group of kids showed up to get on Spank (5.13a) and complained how long it was taking me to work it. They all tried and fell, then I redpointed it after them in three or four minutes.

Do you get a kick out of watching kids’ jaws drop?

The smart ones will catch on and the less intelligent ones will never understand.

Maggie calls me Sensei! I practiced martial arts for many years. … I know 99 ways to kill someone with a carabiner.