Diego Lopez Montull has a legacy—of developing whole bouldering and sport areas—in his home country of Mexico. In Switzerland he bouldered and established hard problems with the legendary Dave Graham.

These days he regularly hikes up five miles and bushwhacks three more to reach some “super beautiful” boulders in Wild Basin, Rocky Mountain National Park. He’s done a new V10 and V11, and has three harder projects going, one “for sure” a V14.

“I always wanted to develop boulders on the side of Mt. Meeker, the Diamond and the Chiefs Head,” he says, and laughs. “I was kind of like lazy.” (All are in the same region.)

But after being cooped up indoors for three months in the pandemic, Montull, 37, has plenty of psych. He loves hiking anyway, and in a time of social distancing, it takes him away from others.

It also helps him find “some cool thing for my life” in yet another country.

“I want to leave a legacy here in Boulder,” he says. An animated personality, he laughs again. “It’s hard! There are so many strong climbers. If I tried to put up a V16 here, no way, Daniel Woods for sure will come do it in a week!”

Montull lives in Boulder with his wife, Emily Matherly, also a superb climber, and most years travels to Mexico for about four months.

How did you continue?

After one year, the [university] trainer introduced me to one of the top climbers in Mexico City, Carlos Vargas. I started to climb with the old generation. I did most of the hard routes, then I started to bolt my own routes, then started to have younger friends … my generation. We made this little crew and we climbed in the city, at Los Dinamos, a national park. Then we went to Jilotepec, two hours from Mexico City. … It was amazing—huge, overhanging 60 meters .… We said, OK, here’s where we can start climbing 5.13s. Then we found Chonta Cave.

When did you begin to travel?

I joined this team that a Mexican alpinist, Andres Delgado, created …. On one of those trips I went to Yosemite. I got super into bouldering on that trip. I was 17. I saw Midnight Lightning (V8), and I started trying it and I did it.

I met Dean Potter, and he liked to see a kid from Mexico coming here and climbing hard. I went bouldering with him. He inspired me so much. Other people thought I was a kid and didn’t even look at me. He marked my life.

How else did you progress?

I told my parents I wanted to go to Europe and climb, they said we can give you 300 euros a month. I stayed in Siurana and met Dave Graham … started climbing with him, and it was mind-blowing. We climbed there and then we went to Switzerland. … I went back to Mexico, and I was very, very strong for Mexico levels because I was three years climbing with Dave, six days a week.

I traveled to Northern Mexico and found Peñoles and started developing [bouldering]. I lived in a tent in Peñoles. I lived in Copper Canyon, always bolting a lot. People would come but they had to go back for jobs or university. Most of the time I was there for six months. One month some friends would come, then I was alone for four months, and then the last month friends came.

You climbed alone for months?

There was this one moment I confronted that. I thought, This is so cool, I just love to do it, even if I’m alone.

Now you’re going to RMNP by yourself?

[Laughs] Yes. I’m super happy. I think, Oh my god, I get to come back every week three times a week. I’m one of those climbers, human beings, I like to be alone.

— FA, Palabras (V13), Peñoles, Chihuahua, Mexico. First V13 in Mexico and Latin America. “The first time I went to Peñoles, I saw this boulder, and it seemed beautiful to me, also impossible. After trying it for three years, I did it, which was a great lesson in my climbing life.”

— FA Pueblo del Sol (V14), Basaseachi (Copper Canyon), Chihuahua. “I was camped there for six months when I started trying, and it was after many years that I did it.”

This interview with Diego Lopez Montull appeared in Rock and Ice issue 265 (September 2020). 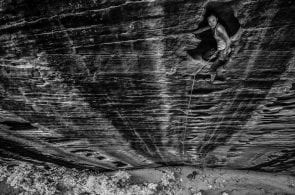 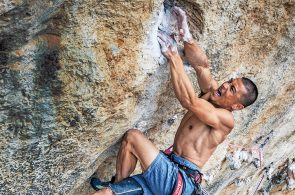