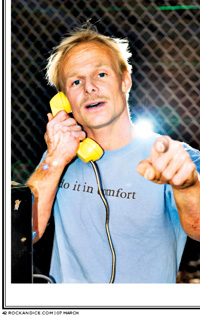 Every now and then, you hear about Rob Miller making some badass ascent in Yosemite, and think, “Who is this guy?” What gets lost in the numbers, however, is that these big ascents are really hard for him. Rob Miller is an everyman’s climber.

Miller has climbed El Cap’s Free Rider (VI 5.12d) in 18 hours, leading every pitch; both the Regular Northwest Face of Half Dome and the Nose on El Cap in 21 hours, beginning and ending at the Valley floor; and such hard Rifle testpieces as Living in Fear (5.13d) and Sprayathon (5.13c). Miller is also behind an impressive list of first free ascents in Yosemite, such as the Quantum Mechanic (5.13a), on Washington Column, and Gemini (5.12a), on Higher Cathedral Rock. One of his most memorable ticks, however, was a probable second ascent of what Miller calls “the most looked at and least tried” desert offwidth crack, Liquid Sky (5.11), on North Six Shooter, Canyonlands.

Miller, who lives in Santa Cruz, California, is bold, on and off the rock. He’s not afraid of a climb’s reputation, or, luckily for me, to ham it up for the camera. Like most climbers on the circuit, he likes to hate on the whole Valley scene … but deep down, he really loves it all.

How much work goes into these long free routes?

It can be days … it can be years. The longer ones can get really frustrating, but the reward equals the effort of finishing a project.

How often do you climb? Is it hard to climb that much?

I climb year round, two to five days a week. What’s hard? The feeling of coming physically unglued. When the candle doesn’t have much wax left, and it’s burning from both ends, something’s gotta give. I’m getting a lot better at taking healthy breaks.

What do you do for work?

Do you think anyone can aspire to free El Cap?

Freeing El Cap is more about seeing something through or, simply, commitment to your dream. Much more so than talent.

Are you a good climber from talent or hard work?

I believe I have natural talent, but I spent many years believing it was about my body’s abilities and the hard work. Now that I have the strength, stamina and fitness … it’s more about my approach while I’m climbing. Primarily, maintaining composure and being as efficient as possible.

What would you be doing if you didn’t climb?
Surfing.

What pisses you off?
Knowing I can do better, but don’t.

What are five things you want to do before you die?
Surf with unmitigated style. Entertain a large audience with authority. Design my own home that I pay someone else to build. Sail by the stars in Indonesia. Speak another language fluently.

==
How’s that going?
It’s a challenging quiver of dreams to go after, especially the sailing by the stars and speaking another language. I already have a clear image of the house I want to build. I’ve begun speaking to large groups and absolutely love paddling into powerful waves.

Scariest climbing moment?
It was definitely staring down my mortality one long, wet night caught underneath a waterfall, while pinned to the Salathé in February.

What were you doing on El Cap in February?
Essentially, we didn’t know any better.

When were you lowest?
As an adolescent teenager. I was bored and lived in the suburbs. I had no idea how generous life could be.

When were you at your highest?
There’s been some truly sublime moments … but I’m most excited about where my life is taking me right now. I’d have to say it’s yet to come.

Paige Claassen: "Every Attempt is a Success if ...