The truth about going for it.

Climbing is not safe. People die climbing. People die rappelling. People die standing at the base of crags. People die in rock gyms. There is no way to be alive and fully avoid danger. But as hobbies go, climbing has a high mortality rate. How many other activities have annual accident reports or necrologies marking the deaths of its participants? With the acceptance of the basic tenet that our sport is dangerous, it stands to reason that the increasingly popular, high-paced game of speed climbing El Capitan is also fundamentally not safe, if not exponentially more risky. Speed climbing has always been dangerous, nothing new there, but the conversation around it has been dishonest.

To quote my friend Niels Tietze, a YOSAR member who died in a rappelling accident in 2017, “Risk, for it to be truly risky, means that someone will pay the cost. Some will die. Others will be maimed. We stack the odds in our favor but eventually the dice roll the wrong way. We’ve all slipped. We’ve all watched rock fall near by. Even the legends have shattered.”

From gumbies to pros, boulderers to speed climbers, we are all vulnerable. Accepting and understanding this inherent part of our sport is one of the key ways to avoid earning your own page in the annual accident reports.

But what I am increasingly frustrated by—and I have perpetuated and been susceptible to—is the dishonest conversation that the “legends,” both the sponsored climbers and the underground icons, promote when it comes to the inherent risks in speed climbing. I have multiple female speed records in Yosemite. I have climbed two El Cap routes in a day, four Zion big-wall routes in a day and completed the El Cap/Half Dome link up.

I know speed climbing, but I am guilty of having spread the bullshit narrative that there is a way to speed climb safely. I was wrong. In interviews with the climbing media and over beers around the campfire, climbers often downplay the danger of what most speed ascents entail. We gloss over the runouts above ledges and the moments spent with marginal gear between a simul-climbing team.

“We were totally safe and in control up there,” I have said more than once, totally full of shit and bravado.

[Check out a different point of view from Bill Wright: Average Speed – Playing The Game]

These are some of the most accomplished names in climbing. They have all taken falls while engaging in speed ascents. Most were lucky, myself included. Alex stopped his fall by catching the rope on the other side of his gear with his bare hands and suffered a rope burn. Hans broke both legs. Quinn shattered her back and is currently paralyzed. Jason and Tim died. This is not safe, though we had spoken about it as if it was.

Climbing entire pitches as fast as you can with only a few, if any, pieces of gear and your rope just tied off to the anchor with no belay, is not safe. Simul-climbing with minimal gear as fast as you can on slippery, polished El Cap granite is not safe. At the core, we know this. But we also believed that experience can adequately mitigate the risk. But the list above proves that, while diminished, the risk is not eliminated. Our community leaders could do more to change the conversation about this activity so that the next generation doesn’t approach speed climbing with dangerous ignorance.

The cavalier attitude and the competitive nature of Yosemite Valley has led to this causal approach to speed climbing, and the elites perpetuate it, intentionally or not. When discussing his and Tommy’s Nose record, Alex Honnold was quoted as having said, “We considered safety to be non-negotiable,” implying that climbing over 3,000 feet with fewer than 10 cams in under two hours is safe.

As a member of Yosemite’s Search and Rescue team back in 2011, I told a rookie “We only climb Half Dome in a day,” condescendingly sandbagging him into a potentially dangerous epic. We routinely call a speed attempt on El Cap “a lap,” downplaying the size of the objective and the risks undertaken. Tommy Caldwell, when reflecting on his and Alex’s attempts at the Nose record in the days after Jason and Tim’s fatal simul-climbing fall on the Salathé, said, “I truly feel like we’ve been analyzing every situation and making it safe … It always felt ok.”

It is not safe. Just because you haven’t yet taken a catastrophic fall, just because your team comprises the two greatest El Cap climbers of our generation … doesn’t mean it’s safe. It only means it’s slightly less likely you’ll pump out or bumble your footwork in high-consequence terrain. It only means your skill hasn’t let you down. Yet. Nobody can be perfect all the time.

Sure, Tommy can use his unmatched skill to mitigate the risk. He can use his unparalleled experience of years of climbing Yosemite granite to make the most in-depth calculations, thus minimizing by a modicum the inherent dangers. He can use his friendship with Quinn to knowingly accept, with first-hand knowledge, the potential consequences. That does not change the fact that no matter how good you are, no matter how many times you’ve done it, speed climbing is not safe. Tommy himself took a 100-plus-foot fall while working on the Nose with Honnold. Even Tommy Caldwell has slipped.

With the growing number of people streaming into climbing gyms and out to the crag, the community leaders have the opportunity to help establish norms that perpetuate an informed culture. Not a risk-averse culture, not a coddled culture, but one that speaks honestly about the potential for fucking awful consequences. I know how fun it is to move quickly in the mountains, to simul-climb technical routes and forgo chilly, prolonged belays. I still enjoy days out moving efficiently over moderate terrain with my trusted partners. But no longer do I take it lightly. No longer do I laugh about near-miss situations. I am deliberate. I recognize that my climbing equals (and superiors) have screwed it up on similar ground and paid the price. I try to employ every safety tactic available to have fun and be fast, within reason and without ego.

Tommy Caldwell wondered in his interview with alpinist Kelly Cordes if maybe he was fooling himself by thinking he could speed climb safely. The real danger is not that Tommy is fooling himself, but that we, as speed climbers, are fooling the next generation.

Libby Sauter is a pediatric nurse and former ‘pro’ climber living in Lake Tahoe. Her experience with losing friends to the mountains plus years working on YOSAR have led her to the opinions stated above.

Hans Florine: Back On The Nose, Six Months Later

Nicely written and well timed. Thanks for sharing with candor and self reflection. 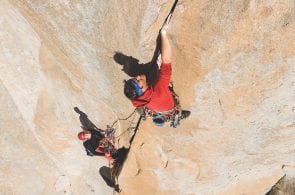 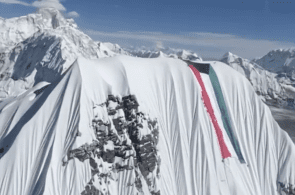 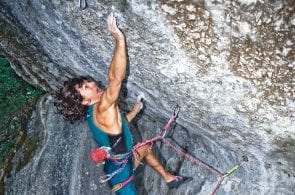