In a world of quick, unpunctuated texting, Jeff Lowe’s words are precise, almost formal, as he sits in a wheelchair, oxygen flowing into his nostrils, his body curved around the notebook that is his fine mind’s satellite. He focuses intently, brow knit, as he pushes a pen with a pincer-like hand.

Jeff Lowe passed away on the evening of August 24, 2018, surrounded by family. This piece from 2014 captures Jeff’s indomitable spirit that he maintained to the end. 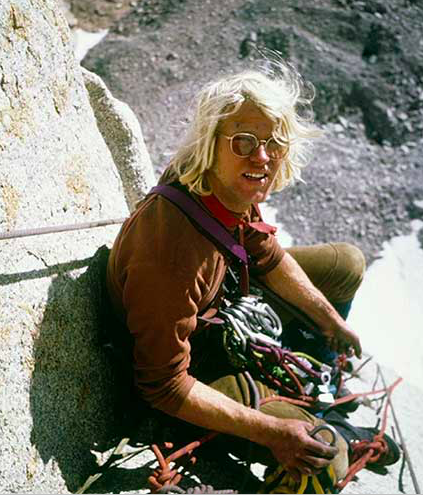 “If you don’t mind engaging in very slow conversation, I’m OK,” the man in the chair writes.

In a world of quick, unpunctuated texting, Jeff Lowe’s words are precise, almost formal, as he sits in a wheelchair, oxygen flowing into his nostrils, his body curved around the notebook that is his fine mind’s satellite. He focuses intently, brow knit, as he pushes a pen with a pincer-like hand.

It’s a heavenly September afternoon, sunny and breezy. Directly below the second-floor apartment balcony here in Louisville, Colorado, a fountain swooshes. Visible in the grass across the patio are the green-and-brown rows of a community garden.

He writes, “I would rather be in the woods with a high mtn backdrop, but we’re here to be close to Sonja and Valentina. So it works for me!” Sonja is his daughter, and Valentina her daughter.

Jeff was a smiling, ambling swashbuckler, boasting a Sundance Kid handlebar moustache and a trademark blond mane. He grew up in the mountains; ski raced for years, then segued into bold and brilliant climbing. He was a highly talented rock climber, though he became best known for ushering in a new ice-climbing era, and took his skills to the high mountains. Lowe and Mike Weis climbed the first ascent of Bridal Veil Falls, Telluride, Colorado, in 1974, and the Grand Central Couloir on Mount Kitchener, Canadian Rockies, 1975. Later would come the improbable Bird Brain Boulevard, near Ouray, with Charlie Fowler and Mark Wilford in 1985. Lowe was part of the legendary 1978 attempt, with the dream team of George Lowe, Michael Kennedy and Jim Donini, that reached the high point of the still-unclimbed North Ridge of Latok 1 in the Himalaya. Ama Dablam, Kwangde Ri, Trango, the Eiger. Even beyond all those, he was an innovator: He brought international climbing comps to the United States, founded the thriving Ouray Ice Festival, and introduced this country to hard mixed climbing, as shown by his visionary ascent of

Today Lowe has an undiagnosed motor-neuron disease closely related to ALS, and is imprisoned in a failing body. His feet in their metal stirrups are motionless, but his mind remains his own and his expression is calm. Always thoughtful, he appears open-minded to the end.

“He’s very interested in the process,” his partner, Connie Self, has told John Meyer of the Denver Post. “He wants to be aware and awake when he crosses over. He’s real interested in what’s on the other side of that veil.”

At the moment, three other visitors—Paul Sibley, his son and 4-year-old grandson, who is playing with Jeff’s pole-and-hook “grabber” (and isn’t entirely sure he wants to give it up)—are here on the balcony, but, honoring the next visitor shift, they pull out. Soon only we two occupy the perch.

Silences pursue each of my questions, as Jeff labors to write. Yet a conversation that could be uncomfortable is not so. As each pause occurs and then stretches, I am more at ease, enjoying the meditative fullness, as if we were in a Quaker meeting.

I wonder what it was like for him to realize, after experiencing mysterious failures in balance and other symptoms, the scope of what was happening to him. In Tuesdays with Morrie, upon being diagnosed with ALS, the intelligent and pure-hearted central character is thunderstruck that others somehow continue with their lives. The world does not stop. What incredulity did Jeff feel?

Lowe can speak, but is difficult to understand. Sometimes I get what he’s saying, more often not. Usually Connie can help visitors, but she is away for a few days visiting a friend.

I thank him for his “likes” on Facebook for my photos of a trip back East to see family. He had liked photos of my mother and her latest grandson, my new baby nephew—not necessarily items of interest to every climber guy.

“I spend too much time on Fb,” he writes, “but it does keep me in touch with people like you.” He uses my name two or three times as we sit. Someone using your name is always a connector, even an honor, but you really notice it when the person must work for every letter. Jeff is naturally the focus of any visitor’s concern, but he repeatedly turns the talk back to me and my family, writing, interests.

“Big lesson for me,” he writes. “I actually must listen, sometimes.” He thinks, and adds, “I should have listened more.”

He coughs: long, difficult coughs. “I drool a lot,” he adds calmly on paper. He keeps a folded washcloth at hand.

Sulma, his caregiver, who hails from Honduras, arrives, approaching briskly from below with a smile up at the balcony, and soon brings out enchiladas for dinner. She mentions that a lot of people visit.

I’ve heard Jeff, at an American Alpine Club event a year and a half ago, speak through a computer. His expression had been briefly mirthful as the strange, robotic tones reached the audience’s neophyte ears. Does he still use that computer voice?

“Battery is dead and cord has been chewed by the cats,” he writes. “Need to order another one.” We laugh; his laugh silent. That soundless laugh returns as we all three sit, and I happen to ask whether he, who was a serious athlete, was careful about what he ate.

His eyes squeeze shut and he ducks his chin in hilarity. No. He swaps fork for pen: “Well, I never ate a lot of beef. Also not much on sweets, but now I’m eating sweets.” In the fridge is the remainder of a birthday cake from the day before. He is 64, an age he has reached beyond any projections.

Since January, he has undergone six bouts of pneumonia, as well as invasions of blot clots in his legs and lungs. Eating is arduous. Breathing is ever more difficult. Last summer I heard from Connie that Jeff was saying his goodbyes to people, but by the time I visit, he has rallied, and is again much better.

Connie will later tell me of Lowe’s composure: “He practiced this for 40 years as a climber and as a skier before that. He is focused on the present moment. So, he does the best he can, with what he’s got that day, that moment … He doesn’t think too much about the future—he just lives every day like anyone else, but he stays more present.

“He is still quite hilarious and creative at finding ways to express himself.”

I ask Jeff what makes him happiest these days. He writes: “Family, friends, fellow members of the tribe. I don’t need any more than that. I still enjoy the mtns when I can get to them. I miss climbing, skiing, hiking, etc. I’ve expected to be dead for so long that this is all gravy.

“I can’t see myself whining about all the ‘bad luck’ I’ve had,” he adds, “when in fact I’ve been blessed in so many ways I never could have imagined.”

Would he like to tell people, his community, anything?

I say, and mean it, that during this greatest challenge of his life he has been brave and full of grace. He shrugs and says, and I can make out the words, “I don’t have a choice.”

He turns his face back down to write, “I’m satisfied with it all. Grateful humbled full of joy etc etc etc.” The repetition amuses me, and he bends his head again, adding, “Humor off the cuff is the hardest to lose.” Then: “I had a low bar for my jokes.”

In leaving, I don’t say goodbye, just good night. He writes, “We’ll see you next time.”

Jeff Lowe and Connie Self have been endeavoring to finish his film memoir, Metanoia, named for a transformative experience during his solo on the North Face of the Eiger. The film may be finished in the next four or five months, according to Lowe. 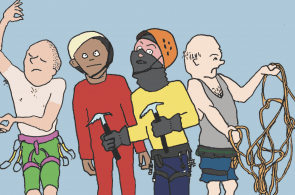 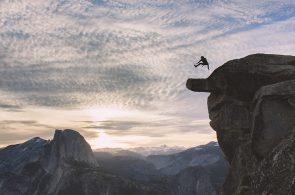