Majka Burhardt, Kate Rutherford and a group of scientists rope up to climb Mt. Namuli in Zambezia, Mozambique. Burhardt and Rutherford use their climbing expertise to get the team to previously unexplored hanging forests and pockets of vegetation on the mountain’s 2,000-foot southeastern face, on a half science, half climbing adventure. 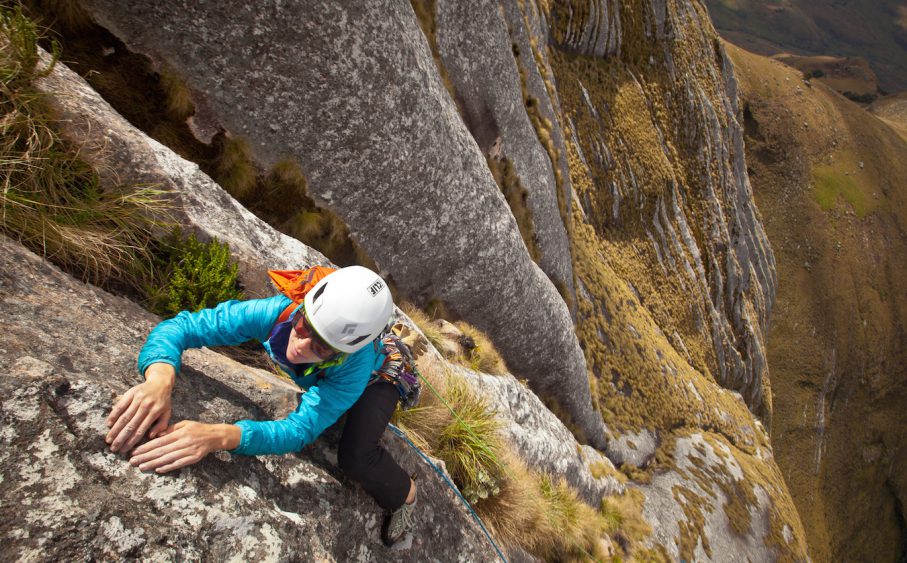 Photo by James Q MartinOn May 27, Majka Burhardt and Kate Rutherford stood on top of Mt.Namuli in Zambezia, Mozambique sharing fist bumps and hollering with their team. They were celebrating the end of a month-long expedition.Putting up a first ascent though, was only half the adventure.

The expedition started like so many others: with a photograph. Burhardt’s friend was visiting Mozambique when he spotted a tall, vegetated granite face out of the window of a moving train. He snapped a picture for Burhardt, who has a reputation for climbing obscure rock faces around the world. Intrigued, she began researching Mozambique’s climbing potential.

Topographic maps indicated that the Mozambican landscape was mountainous, but for many years, those mountains had been isolated from people. Unexploded landmines—left over from the civil war—made reaching most mountains too dangerous.

She was just back from Africa, where she had spent five days cleaning a 1,400-foot route on the highest mountain in Namibia. Burhardt says, “I was scrubbing dirt and decaying plant life out of this crack, and kept thinking ‘I should bring scientists with me on one of these trips.’”

Inspired by her friend’s photograph, she reached out to researchers who had been working in Mozambique. Could they use her climbing expertise to further their research, and if so, how? Jonathan Timberlake, a biologist at Kew, had the answer: Mt. Namuli. It was an exceptionally understudied massif, the second highest mountain in Mozambique, and the few studies on Namuli had yielded a trove of discovery that promised more. The mountain’s steep 2,000-foot southeastern face, dotted with hanging forests and pockets of vegetation, had likely never been reached by humans. It would take a climber. 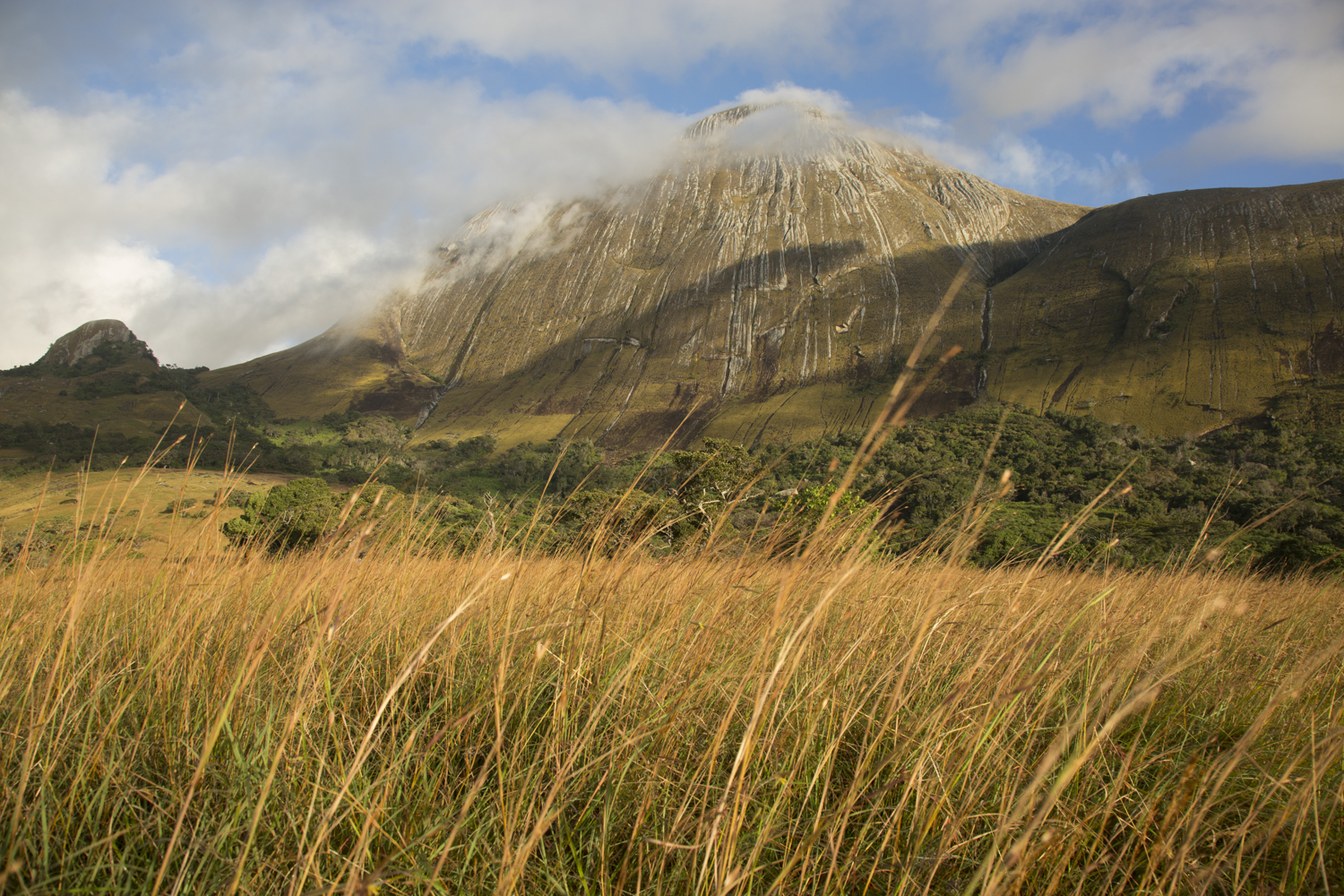 In May of 2014, after several false starts due to regional violence, the sixteen-person team, dubbed “Lost Mountain,” converged in Mozambique. They drove to Namuli on motorbikes, carrying everything from thousands of feet of rope to soil sample containers. “I had ice tools for Pete’s sake,” says Burhardt. “We honestly had no idea what we were going to encounter.” Or even if the face was going to be climbable at all.

The group set up camp at the base of the mountain. The landscape used to be rainforest but is now dominated by scrub and grassland. High humidity and frequent storms, however, are still commonplace. “The dew was unlike anything I’d ever seen before,” says Burhardt. “And it was surprisingly cold at night.”

Burhardt and Rutherford took two days to suss out a route before bringing the rest of the team up. The scientists had requested access to the series of hanging forests halfway up the face as well as some sedge near the summit. Burhardt and Rutherford’s goal was to link those ecological hot spots in the most aesthetic line possible. The result was Majka and Kate’s Science Project (5.10-, IV, 12 pitches).

The face is covered in clumps of vegetation, which made for tricky climbing, especially when frequent rain storms turned the granite wall into a slip n’ slide. “It was a lot of lassoing grass clumps for protection, then grabbing them and standing on them with a little traction on the wall,” says Burhardt. She and Rutherford bolted the route on lead, placing a total of seven bolts in twelve pitches, not including anchors. 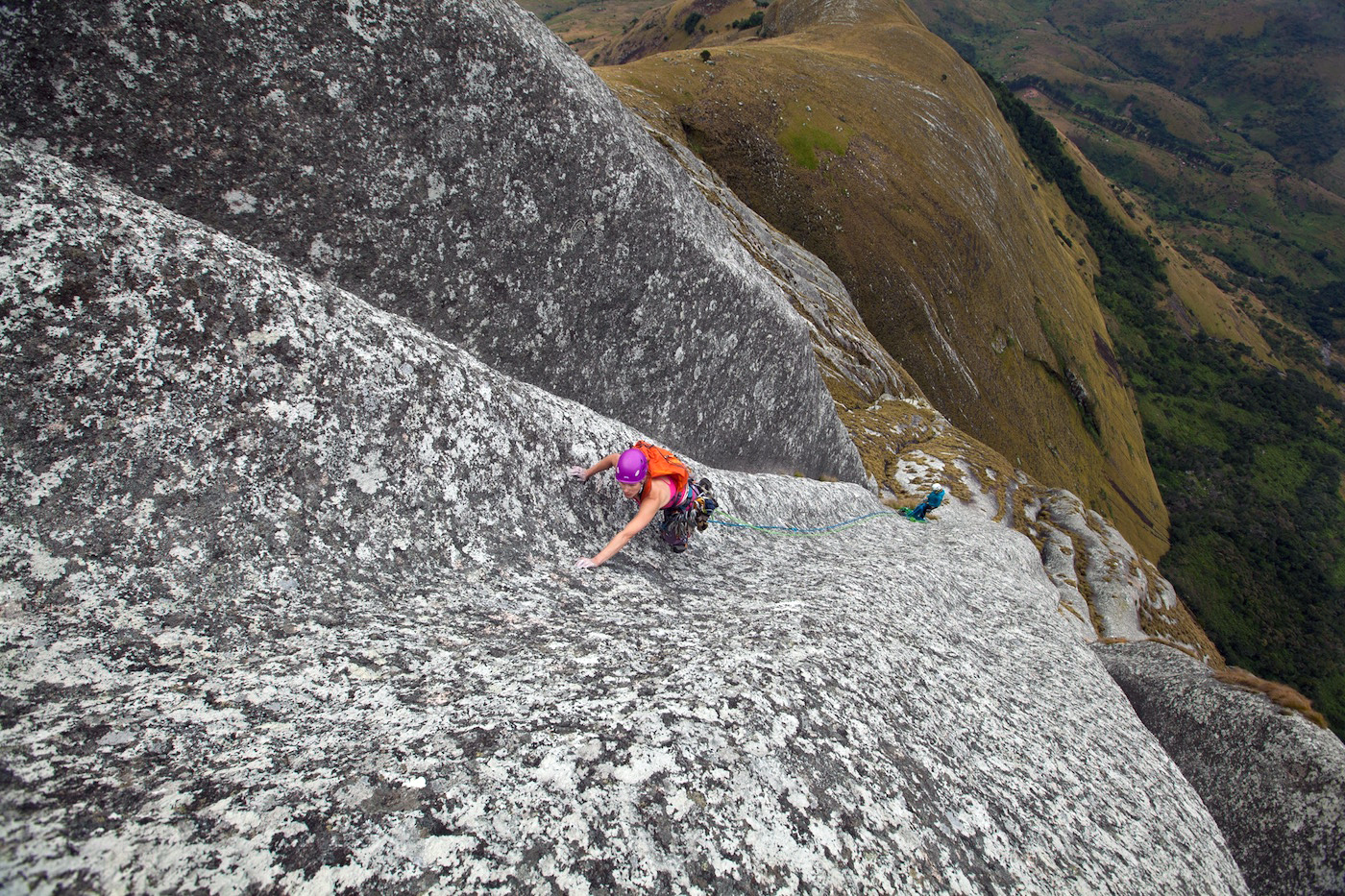 Over the course of the next few weeks the scientists learned how to jug up and down the route in order to collect soil and insect samples. Some learned how to climb in order to second the upper pitches of the route. Taking six never-ever climbers up a 2,000-foot vegetated granite slab could easily have ended in disaster. But, Burhardt says, “It was really fun!” The scientists were eager to teach her and Rutherford about the significance of each discovery they made. In turn, they were eager to learn about climbing.

“Of course [entomologist Dr. Flavia Esteves] fell in the one place where there was a danger of swinging,” says Burhardt. “She did two complete 360s. I expected her to want to quit climbing, but she just lunged at the wall and shouted ‘look, there’s an ant!’ Watching the scientists get really excited about how a certain ant population indicates the health of a greater ecology, and knowing that I brought them to this place and enabled them to make these discoveries, that was pretty cool.”

The pinnacle moment of the trip came when Rutherford and a volunteer found a snake-like animal in their cook tent. No one knew what it was. They called over Herpetologist Dr. Harith Farooq, of Lúrio University in Mozambique. “He walked up and just started crying,” recalls Burhardt. “Kate and I didn’t fully comprehend the significance of the discovery, so he tried to explain ‘You don’t understand. This is a Caecilian. It is its own Order.’ He was almost speechless.”

The point was not just to send a message, or to send, it was to use climbing to make valuable, tangible contributions to conservation efforts in underserved communities around the world.

“Adventure doesn’t need to dovetail with conservation,” Burhardt says. “But as adventurers we have the power to bring an edge to the conservation discussion, and with that comes a responsibility.”

The Namuli adventure will be featured in a film, coming in 2016. Check out the trailer below and click here for a list of showings.