After a tough qualification round on Friday, followed by semi-finals and finals on Saturday, Delaney Miller and Kai Lightner walked away as the 2015 SCS National Champions. Photo by Evan Warner (@evan_warner). 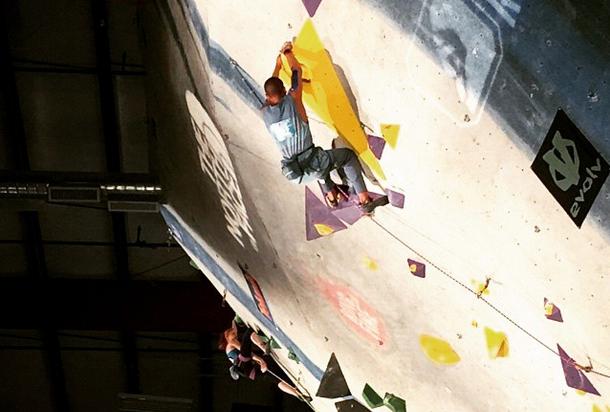 After a tough qualification round on Friday, followed by semi-finals and finals on Saturday (click here for video), Delaney Miller and Kai Lightner walked away as the 2015 SCS National Champions.

“I still can’t believe how incredible this past weekend was!” Delaney Miller, 19, reported on Instagram. For Miller, this was the third year in a row that she has won the title. “It is such an honor and it would not have been possible without all of the support from my family, friends, and sponsors!” Miller wrote.

Sasha DiGiulian, who placed second in 2014, was disappointed with her performance during this year’s championships. On Facebook, she posted: “You win some you lose some but if you aren’t in the arena you never know victory nor defeat.

“I will look at the bright side… There is now evidence of me sticking a dyno in a comp.”

For men, Kai Lightner, a 15-year-old competing in the Open National Championships for the first time, climbed smoothly, slowly and in control to reach the highest point on the men’s final route.

A new face, Jesse Grupper, another young-gun at 18, took second place, with the veteran Matty Hong in third. Carlo Traversi, fresh off his send of Kryptonite (5.14d), came in fourth, and Brendan Mitchell finished fifth.

Stay tuned for the highlights video!

I still can’t believe how incredible this past weekend was! I’m very excited to have won scs nationals; it is such an honor and it would not have been possible without all of the support from my family, friends, and sponsors! I’m glad my hard-work paid off and that I have so many amazing people in my life! Thanks to @crgwatertown for hosting the event and all of the setters and volunteers that offered their time and expertise. Photo by Mike Barron. @adidasoutdoor @petzl_official @climbonproducts @healthyskoop @fiveten_official #climbing #nationals