You may recognize Collette McInerney from any number of places places. Besides being a fixture on the international sport-climbing circuit for the last couple of years, McInerney has been featured in Internet climbing films tearing up 5.12 tufa lines in Spain and was last year's cover girl for the Women of Climbing calendar. 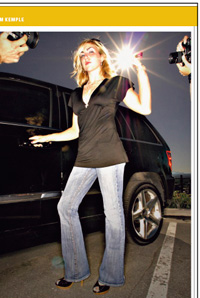 You may recognize Collette McInerney from any number of places places. Besides being a fixture on the international sport-climbing circuit for the last couple of years, McInerney has been featured in Internet climbing films tearing up 5.12 tufa lines in Spain and was last year’s cover girl for the Women of Climbing calendar.

The spotlight shining on McInerney, however, is in some ways ambient light cast off her partner, the active and accomplished climber Joe Kinder. Still, McInerney has redpointed such 5.13a’s as Minus Five at Utah’s Black and Tan wall, and has sent V8 on the boulders — achievements she says are nothing special, relatively. McInerney is a sweet, funny and positive force, who loves the dirtbag lifestyle, but also sometimes struggles with the reality of climbing fulltime, a perspective that is not often represented in magazines and media.This year represents one of growth and change for McInerney. She is psyched to balance climbing with a full-time job she recently took in Salt Lake City.

My mom actually started climbing before me, and told me I would love it. Of course, I blew her off.

That same year, I was a freshman at Fordham University, in New York, and my roommate Megan McDonald convinced me to go to a climbing gym. I thought it was awesome, but didn’t get serious about it until I met Jackie Chiddo, who was super amped on climbing and got me on my first road trip, which really hooked me on the sport.

You divided the last few months of your life traveling in Spain and living in Boulder. What’s the difference between the two?
Spain knows struggle. I don’t think Boulder is ever struggling.

Tell me about the last place you lived before that.
Las Vegas. The woman who lived next to us was trying to quit smoking, but she continued to smoke. She had these hacking sessions all night! Unbelievable. I used to smoke menthols, but I’ll never go back after that!

What is your goal as a rock climber?
That changes depending on the time of the month.

Will your accomplishments always be overshadowed by Joe’s?
Yes, and rightfully so. I don’t think I have the drive to accomplish what Joe has already done.
==
Has climbing all the time with a pro climber helped or hurt your abilities?

Physically, it has helped. But I’m finding more and more that mental psyche has more to do with being a strong climber than pure physical strength, and it’s hard for me to stay psyched all the time.

Can you give an example?

We recently spent three months in Spain. Before we left, I didn’t know what to expect for myself. When month two came around, we were doing a lot of media stuff and the trip wasn’t going as I had pictured it.

For example, we either weren’t in areas as long as I would have liked, or we were staying in areas I wasn’t into for longer than I wanted, and I wasn’t climbing as well as I thought I would be after a month. The days became really one-dimensional, and my psyche was severely lacking. I just wasn’t motivated to climb when that was all I was doing every day.

Joe signs all his e-mails with, Always psyched! What does he know that you don’t?

I feel like I climb better and stay more motivated when I have to work to climb, and climbing is more of a reward than a job I do every day.

Recently, I was projecting Poetic Justice (5.13a) in Rifle. I was hanging on every draw, and ready to give up. A couple of my girlfriends showed up for the weekend to climb, and I guess I wanted to show off to them, because I almost did the route on that attempt. I think I get really psyched climbing with girls. I don’t make so many excuses.

How has climbing changed your life?

Taken over! I used to live in New York City, have style and go dancing. Now, all I wear is Verve and go climbing.

What is your biggest fear?

Same as any other climber: dehydration.