At around 2 p.m. on March 10, 2014, Jackson DePew of Asheville, North Carolina, was climbing Maginot Line (5.7+) at Shortoff Mountain, in the Linville Gorge Wilderness Area. DePew was runout above his gear when a hold broke. He plummeted 40 feet, impacted a ledge and fractured his pelvis, ribs and tailbone. 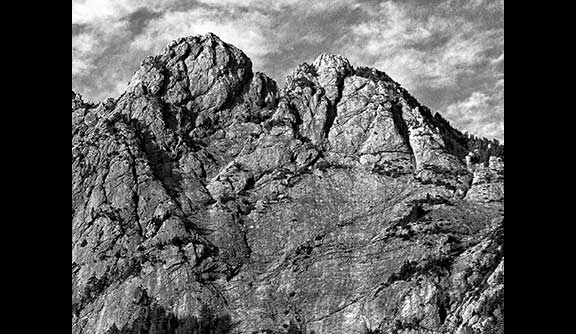 At around 2 p.m. on March 10, 2014, Jackson DePew of Asheville, North Carolina, was climbing Maginot Line (5.7+) at Shortoff Mountain, in the Linville Gorge Wilderness Area. DePew was runout above his gear when a hold broke. He plummeted 40 feet, impacted a ledge and fractured his pelvis, ribs and tailbone. His belayer was able to climb to him, and a nearby party called 911.

Two of DePew’s friends were climbing on the other side of the buttress, and they were alerted via cell phone of DePew’s accident. One of them was a certified Wilderness First Responder (WFR). When these friends topped out, the Burke County EMS was already at the cliff top, too, rigging rescue lines. DePew’s friends were asked not to rappel to DePew, but the WFR ignored the request and rappelled to DePew anyway.

The WFR established a better anchor, assessed and stabilized his friend. He then called 911 and updated Burke County Emergency Management who asked him and DePew’s belayer to clear off the ledge so that a paramedic could descend, administer aid and prepare DePew for a helicopter evacuation. The belayer ascended the fixed line, but the WFR refused to leave. Instead, he climbed 15 feet up and left of the ledge and anchored himself to the wall.

The paramedic came down and again asked the WFR to leave. In a subsequent 911 call, the WFR was recorded saying, “I’m not gonna leave, and you can’t make me.”

The medic on the helicopter requested that the WFR ascend the fixed line, but he again refused. The helicopter approached the wall but had to abort because the pilot wasn’t sure how the WFR was anchored. Helicopter rotor wash approximates hurricane force winds and can blow unanchored bystanders right off stances.

Eventually, the helicopter moved in, extracted DePew, and the WFR ascended. In the meantime, Burke County EMS had called a Forest Service law enforcement ranger, Jason Crisp, who issued the WFR a $120 fine for obstructing a rescue.

Several media sources including the local TV station reported on the dramatic rescue, and the WFR was congratulated for his service. On air, the WFR claimed that, “I couldn’t leave because they [EMS] were using my equipment.”

Climbing-specific media offered opinions that the WFR should be thanked and not fined, and, of course, website forums ignited with slander aimed at the ineptness of EMS services. In an online article posted on a climbing site, an editor opined that: “Incidents like this—fining a civilian for his rescue efforts—could set a dangerous precedent for future would-be rescuers.”

After reading the reports and opinions, I contacted Dr. Seth Hawkins, the medical director for Burke County EMS and the Burke County Rescue Squad. Hawkins also ran the formal governmental Emergency Management debrief of this incident. According to Hawkins, EMS was not using the WFR’s gear, and there was never a time that he couldn’t have ascended. Photos show that ropes were fixed and available.

Hawkins said that all emergency personnel were OK with the WFR’s initial decision to descend and assist DePew. “That was a patient-centered act,” he said. “But not leaving after being repeatedly asked was self-centered.”

Proper protocol when you are  involved in a rescue is to: “Clearly identify yourself and training and make emergency personnel aware that you want to help,” said Hawkins. “But absolutely follow all operational commands during the incident.”

The accident victim, DePew, did not respond to queries for an update on his condition.