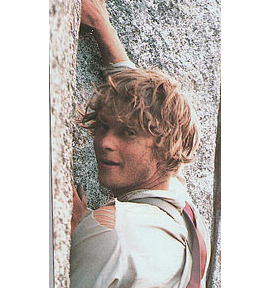 Porter was born in Massachusetts in 1951, and by the early 1970s was one of America’s leading rock climbers. Notably, he made the first ascent, solo, of Zodiac in 1972 on El Cap. That same year he also established the iconic Shield, and the next year followed up with first ascents of Mescalito and Tangerine Trip, a line that was then the steepest on El Cap.  In 1975, Porter put up Excalibur using an innovative bong-and-wood-block sandwich to overcome the route’s lengthy section of flaring six-inch crack. This in an era before the invention of cams and most gear that we now take for granted.

Besides pioneering hard and big routes on El Cap during a time even before the reign of Jim Bridwell, Porter was one of the first and few Valley climbers to take his trade to larger arenas. Most famously, he soloed Baffin Island’s Mount Asgard, crossing glaciers with a long pole lashed to his pack to catch him in the event he fell into a crevasse. It took him a month just to ferry in his supplies, which included a wood-framed “Whillans Box” that he hauled up the wall to live in. At one point during his nine-day solo, Porter, caught in a snowstorm, had to lick ice off his Jumars to get them to grip the rope. His 1975 Asgard route, at 40 pitches, was the world’s first  Grade VII wall, and ended in a 10-day foodless walk on feet so frostbitten he had to cut his boots open, out to his extraction point in a fjord.

Not content to climb just rock, Porter, in 1976, made the first solo of the Cassin Ridge on Denali, climbing the bulk of the route in a continuous 36-hour push. In Canada, he, with Bugs McKeith, made the first ascent of big waterfall ice route Polar Circus.

Shunning the limelight—he refused to provide the AAJ with any details of his Cassin solo, for example— Porter largely kept to himself and continued a life of adventure beyond climbing. He kayaked around Cape Horn, and remains one of the few people to have done so.

In 2001, Porter, a scientist by trade, was profiled in the New York Times.

For the complete interview with Charlie Porter go here.