Edge of the Map: The Mountain Life of Christine Boskoff - Rock and Ice
Inside Beta +

Edge of the Map: The Mountain Life of Christine Boskoff

Christine Boskoff was the leading American woman on  8,000 meter peaks in the 1990s and early 2000s, before her death on a mountain in China in 2006. Now, author Johanna Garton has finally told Boskoff’s full story in Edge of the Map.

Growing up in the same town of Appleton, Wisconsin, Johanna Garton and the alpinist Christine Boskofff never crossed paths—they were a few years apart. They both ended up in Colorado in the early 2000s, but still never met, moving in different circles. When Boskoff—whom Garton says was “arguably America’s finest female high altitude mountain climber” from the late 1990s through the mid 2000s—and her partner Charlie Fowler went missing in 2006 on expedition in Sichuan, China, Boskoff and Garton’s stories finally converged, albeit in an unusual way: Garton would go on to become Boskoff’s biographer.

Boskoff, who died at 39—her body was found in 2007, a year after Fowler’s, on a remote peak in Sichuan—is to this day the only American woman to have summited six unique 8,000-meter peaks. She also completed technical ascents on lesser-known 6,000-meter peaks.

Christine Boskoff’s story is “really compelling” and “could have been written by any number of people,” Garton says. “But I just feel like it was really meant for me. So that’s why it’s taken so long to tell, I suppose. It was just waiting for me I think.”

Below is an interview with Garton about her new book Edge of the Map: The Mountain Life of Christine Boskoff.

Following the interview is a short excerpt from the book—check it out!

Without telling us the whole book, can you give us a little teaser about who Christine Boskoff was?

I don’t want to give spoilers! Chris Boskoff was arguably America’s finest female high altitude mountain climber. She began her climbing career kind of late in life, in her mid to late 20s, in the mid 1990s. She learned how to climb in Atlanta, from her first husband. Eventually they moved out to Seattle and bought Mountain Madness—the guiding company that had been owned by Scott Fischer prior to his death on Mt. Everest in 1996.

Chris went on to summit six of the world’s 8,000-meter peaks, which, at the time she completed them, was a record for American women, and that stands today, 20 years later.

They went missing in 2006, in western Sichuan Province in China. They had not left a tremendous amount of detail on where they were going. So when they failed to show up for the return flights to the states, a search and rescue mission began.

Eventually they were found and they were presumed to have died in an avalanche on a remote peak.

The backstory of how you came to write Edge of the Map is Quite interesting. Can you tell me a bit about that?

Chris was from Appleton, Wisconsin, my home town as well. She was three years older than me. We never overlapped in the three-year high school we went to. Though we both ended up in Colorado in the early 2000s, that wasn’t my universe—I’m not a climber—so I didn’t follow her. Also she was very humble about her achievements, so she wasn’t well known.

It wasn’t until she went missing in 2006 with Charlie, when it was all over the news, that my mom, who still lived in Appleton, reached out to me asking if I had heard of it. I had not heard the story and I was kind of confused as to why my mom was so interested in this. My mom’s not a climber either, after all. Then she said, ‘You went to high school with her.’ So I was astounded—I didn’t know who this woman was.

My mom later reached out to Christine’s mom, who was 80 years old, still living in Appleton. They became friendly.

My mom was a journalist. She decided to write a book about Chris after getting to know Chris’ mom. So she worked on the book for about 10 years. My mom developed Parkinson’s and it became harder for her to work. At the time my mom’s health was failing, I had published one book and was looking for a second, and it was really a no brainer that I wanted to help my mom finish telling the story.

It’s a really compelling story that could have been written by any number of people, but I just feel like it was really meant for me. So that’s why it’s taken so long to tell, I suppose. It was just waiting for me I think.

What is the thing you want people to come away with most after reading about Christine?

It’s really interesting: I’ve had a lot of people talk to me about releasing the book into the universe at this moment. So much stress in the world, questions about where we’re going, people are focused inwards in many ways. So I hope people take time to reflect, think about how they treat one another, how they treat the environment, and think about those things that perhaps Chris and Charlie would have been involved with today if they were still living, like environmental stewardship.

Excerpt from Edge of the Map

Relative to the mountains of the Greater Himalayas or the Andes, Mount Washington in the White Mountains of New England pales at 6,289 feet. Yet its proximity to the intersection of several storm tracks makes it one of the deadliest mountains in the United States. Catching storms from every direction, the mountain faces brutal gusts that can come out of nowhere. Small outbuildings at the peak are chained to prevent destruction. In 1934, a wind speed of 231 miles an hour was clocked, a Northern Hemisphere record that still stands.

Wind blanketed Chris and Keith, as they began their attempt on Mount Washington’s northern face. “Ready, Chris?” Keith called. He stood a distance from her, on a wall of steep ice.

Unanchored but roped together, Chris looked down, double-checking the toe straps on her crampons. “Yeah, one sec. I wanna make sure I’ve got these tightened.” A blast of air trapped her words, carrying them away before reaching Keith. Leaning over, she caught a glimpse of the rope, furiously uncoiling. Reacting immediately, Chris jumped hard on her ice axes with her body to arrest Keith’s slide. In a near freefall, he had been caught by the gust, knocked off balance, and was plunging down the ice. Digging into the ice with her crampons and tools, Chris stopped his fall, hoping the axes would hold.

A sharp pain rocketed through her hand, radiating up her arm. Sensing that the axes were holding firm, she peered down and saw her husband’s face—a look of horror as he lay flat against ice. His fall had been stopped. Silently, Keith made his way back to her, relying on his crampons and pulling only gently on the rope as he heard his wife’s cries and saw it wrapped around her hand.

Her left hand gripped the ice axe. Her right hand limp against the handle of the second axe, bones crushed underneath skin. “I think I broke my hand, Keith. Dammit.”

“You broke your hand but you saved your husband,” he said. “You saved my life, you ridiculous woman!”

The chill of the snow they lay on was no match for adrenaline. Chris and Keith held each other, breathing heavily. Her hand was battered, but her confidence high. She’d weathered her first big test. Keith leaned over and kissed her. She smiled, then winced.

Walking to the car, she said, “I’m ready for more.”

“More? How about we talk about more after dinner once you’re in a cast?” He knew she was ready for the big boys. “Those eight-thousand- meter peaks are no joke. You’re gonna need both hands for those.”

“I can be ready,” Chris said. “By summer. Broad Peak. Scott Fischer will be there and it’s our time, too.”

“Scott’s been climbing for ten years. He’s done K2 and Lhotse. He could probably do Broad Peak in his sleep,” Keith said.

“I’m not going without you,” Chris pressed. “Are you in or out?”

Excerpted with permission from Edge of the Map: The Mountain Life of Christine Boskoff by Johanna Garton (Mountaineers Books, April 2020).

An uplifting and moving story, Edge of the Map is a poignant testament to one woman’s strength, determination, and boundless love for the mountains.

Johanna Garton interviewed more than seventy-five friends and family of Christine Boskoff and Charlie Fowler in writing Edge of the Map, including notable climbers such as Peter Habeler, Nazir Sabir, Willie Benegas, Phil Powers, Mark Gunlogson (current owner of Mountain Madness), Hector Ponce de Leon, Steve Swenson, and Conrad Anker. Conversant in Mandarin, Garton conducted several weeks of research and interviews near the site of Boskoff’s death in China. Not a mountaineer but a marathoner herself, Garton was drawn to Boskoff’s story for deeply personal reasons: hailing from the same small Midwestern hometown, and in fact attending high school together though they never met, Garton and Boskoff’s paths seemed destined to intersect. When Boskoff went missing in 2006, Garton’s mother, also a journalist, began a ten-year deep dive into Boskoff’s story as well as a close friendship with Boskoff’s mother. She devoted herself to this project until a diagnosis of Parkinson’s disease made it clear that Garton was meant to pick up where she left off and ensure Boskoff’s story was told. Garton is a journalist, attorney, and non-profit consultant who lives in Denver. Edge of the Map is her second book. 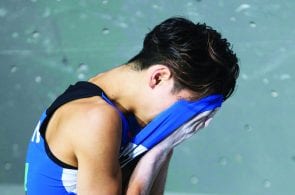 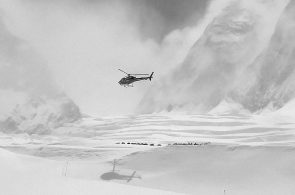 When a 7.8 magnitude earthquake an its resulting avalanche sweeps away much of Base Camp on Mount Everest, world-renowned mountain-climbing guide Dave Hahn of Taos, New Mexico; Sherpa sirdar Chhering
Dorjee; assistant guide JJ Justman; and their five clients find themselves stranded at Camp 1, at the elevation of 20,000 feet. With their route down the mountain now obstructed by unpassable crevasses, Hahn and his team face a risky helicopter evacuation.