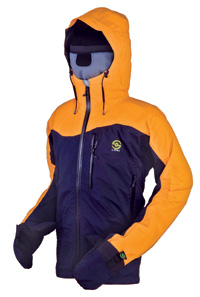 I tried something new: the Wild Things Super Light (SL) Alpinist and the Loki Levity shells, two garments that use eVent fabric.

Until recently, most waterproof/breathable jackets I wore felt like saunas. They got the waterproof part right, but like an asthmatic child, they had trouble breathing. In sub-zero temps, this caused my sweat-dampened fleece to freeze to my shell. Then I tried something new: the Wild Things Super Light (SL) Alpinist and the Loki Levity shells, two garments that use eVent fabric.

Like most popular waterproof/breathable fabrics, eVent uses an expanded-polytetrafluoroethelene film. But, unlike the others, eVent is oleophobic, meaning it is impervious to body oils. Other waterproof/breathables employ a layer of polyurethane to keep oils out, a layer that can inhibit breathability.

How breathable is eVent? Army testers at their Natick Lab found eVent to be more than twice as breathable as its closest competitor and three times as breathable as most. Peter Hickner, owner of Feathered Friends, tested it against Epic, a micro-fiber, and found eVent more breathable, a surprising result considering that waterproof/breathable fabrics are not supposed to breathe better than micro-fibers.

As for me, I’ve used eVent shells on mounts Rainier, Shasta and Whitney in winter. I’ve taken the jackets ice climbing in minus-13-degree temps, and into the high Sierras—battling wind, rain and snow. Both the Loki Levity and the Wild Things SL Alpinist proved waterproof, windproof and breathable. At less than one pound, the SL Alpinist (15.8 ounces) is the lightest full-coverage jacket I’ve tested. It has the usual standard mountain features such as a hood that covers a helmet, two internal pockets and two Napoleon pockets. It doesn’t have pit zips and doesn’t need them.

The 23-ounce Loki Levity contains some truly unique features such as integrated mittens, a face shield and a huge back cargo pocket. The mittens tuck unobtrusively out of the way into a hidden pocket above your wrist. When the cold wind blows, just pull a tab on your sleeve, do a Houdini flip with your wrist and, whah-bam!, the mitts appear. The built-in face mask stores behind your head in the parka’s hood. The cargo pocket on the jacket’s back allows enough room to stash any items you’d need for a day trip.  The jacket also stuffs into this cargo pocket, and in this mode, you can wear it on your back with two nylon shoulder straps instead of tying it around your waist. Sick!