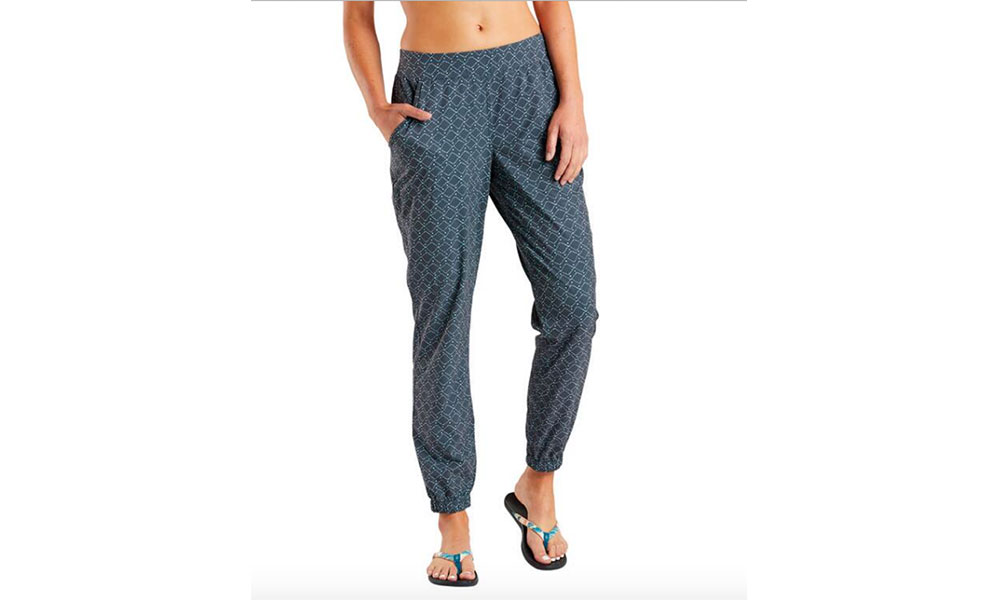 BEST FOR: Gym and crag / boulder use, warm weather

Dauntless Jogger is the name of this pair of pants. Don’t be fooled. Maybe Title Nine just mixed up some of its own titles (haha), or someone from the running department purloined an item intended for climbers.

Either way, I tried these on, just as nice-looking summer pants, pants being the operative word since around here warm weather was delayed to the point of absence. You needed long everything until pretty much this week.

I wore these pants one day, then the next, then the following evening to climb in, and again two days later. They are great gym pants but the lively pattern boosts them a tad, and they work for going out to casual restaurants and, for many of us, to the office.

They are so comfortable because they are almost unbelievably light, made of a thin fabric called Nimblene that is 86 percent poly, 14 percent spandex. There are a high, wide, comfortable elastic waistband (with a drawstring I don’t use), two trim pockets and one zip pocket, also low profile. The pants are stretchy and the fabric is slick, sliding on you rather than holding or binding.

An unexpected benefit came in the fact that they do not show chalk the next day; it just doesn’t cling to this fabric, and any particles left behind tend to be camo’d in the pattern. Just makes the pants that much handier to be able to sneak some more uses out of them without washing.

The pants are specific to Title Nine, a women’s sports-apparel company started in 1989 in a garage in Berkeley. Actually, it all really began with an important 1972 piece of legislation giving equal rights to women and girls in schools and sports programs, but for our purposes the company is 30 years old this year.

The website gives humorous background: “In the beginning, there was just Missy [Parker] in her house, merchandise in her garage, a phone on her living room table, and 13,000 very bad catalogs on their way to some understandably unresponsive customers. There was cycling gear and running shorts.  There were funny-looking tights. There were even basketballs, but no tops or tees …. That first mailing generated a sum total of 56 orders, only 7 of which came from folks Missy didn’t know.”

But also in the beginning were four styles of sports bras, which flew off the shelves and launched the company.

Back to the pants: technical but multi-use, including for travel. I recently wore fitted capris one way on a long flight to a hot country, then loose capris on the way back. The loose ones posed a problem, in that I got cold and had to scrounge for an extra blanket to wrap around my legs mummy-style, or maybe the idea is Whistler’s Mother. The Dauntless Joggers (secretly renamed Climbers) are cool if you need them to be, for a desert or mid-Atlantic day, but they extend to just above the ankle and are gathered, so no drafts.

The style currently comes in just one color, gray with a light turquoise pattern. They got the color name right for us, anyway: Granite.