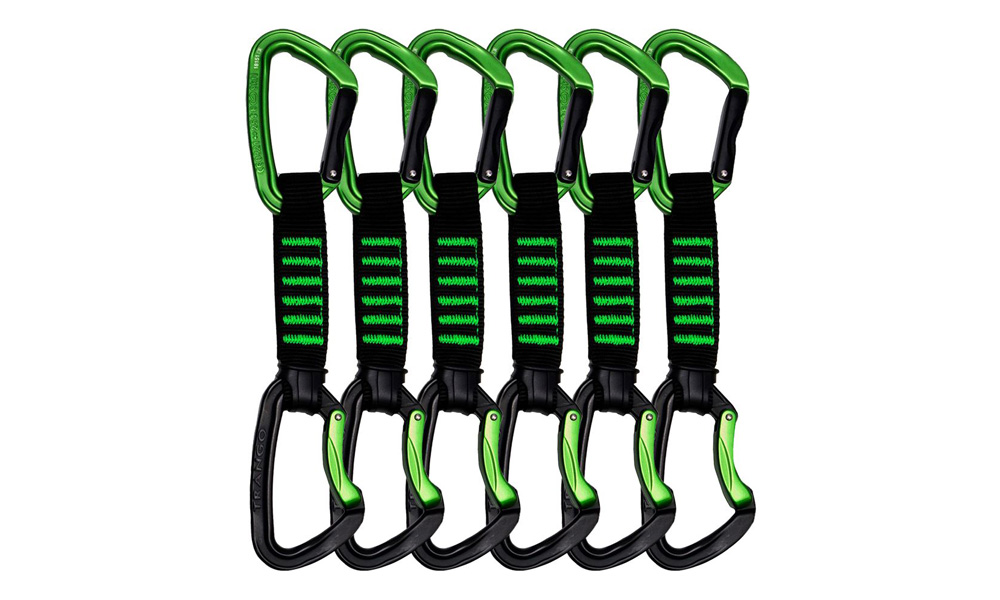 The Trango Reaction Quickdraw is one of our new faves for climbing hard routes, whether onsighting at our limit or redpointing longterm projects.

I’ve got a hodgepodge collection of quickdraws: three from this brand, two from that; four of this model, five salvaged from parts of old draws. You get the idea. If I hop on a hard route, I tend to use my least favorite draws on the easy parts, saving my faves for what I expect to be the crux or sustained sections. Lately, when I get to those harder parts, I’ve been reaching for the Trango Reaction Quickdraws.

The Reaction weighs about 4 ounces which means it is far from the lightest quickdraw around—but that’s not what it’s trying to be. With the Reaction, Trango prioritizes the feel and handling of the quickdraw over saving tiny fractions of ounces with a thinner dogbone or a wire gate or anything else.

The action on the Reaction (see what I did there?) carabiners is remarkably smooth and responsive. The straight-gate Reaction carabiner—used on the bolt-end of the draw—has a small divot on the outside of the gate, which functions as a thumb catch would on any less-than-ideal hold on a route. It’s almost like those little raised bumps on the “F” and “J” on your keyboard, helping you to sightlessly orient the quickdraw perfectly in your hand based on the feel of it.

Both the bolt-end carabiner and the bent-gate carabiner for clipping the rope have a keylock design, so the noses don’t snag on the bolt hanger, your gear loop, your finger, the rope, or anything else.

The reaction comes in both 12- and 17-centimeter lengths. A six-pack of the shorter Reactions will run you $116—money well spent, if you ask us. Might as well get a full complement of them. If you rack up with just Reactions, you won’t need to worry which draw you reach for at any particular point—they’ll all be good.