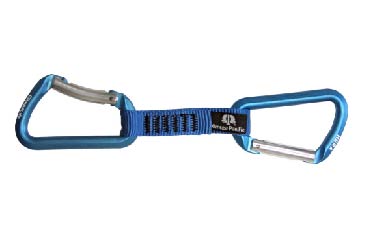 You use a quickdraw to keep you safe—basically, alive. But how about reading a symptom card or supporting a cause?

You use a quickdraw to keep you safe—basically, alive. But how about reading a symptom card or supporting a cause? If you are a woman—or a man with women friends, a girlfriend, sister, mother—that could save a life, too.

Omega Pacific has come out with the Telos keylock quickdraw, a product of its partnership with the HERA Foundation, whose goal is to fight ovarian cancer. Each sale of a quickdraw—teal-blue to signify ovarian-cancer awareness, and engraved with Climb4Life on the bent gate and HERA on the straight gate—sends $2 to HERA. The Telos comes with a symptom card that refutes the old saw that ovarian cancer is symptomless.

It’s a solid and versatile quickdraw. The Telos straight- and bent-gate carabiners are each rated to 22kN, and have a tapered nose and hooded gate. The piece is a little spendy, but I like it as a commemoration. The graceful and resourceful Sean Patrick, founder of the HERA Foundation and its climbing events, which the climbing community has embraced, succumbed to cancer only three months ago after outliving her prognosis by a dozen years. A conservative estimate by Scott Paramski, her partner in life and in her cause, was that she saved or extended the lives of 60 to 80 people by telling them to seek or insist on tests, which in some cases resulted in early detection, or in helping them find options, such as roles in treatment studies (for free). A month-long fundraiser in Washington, D.C., six weeks after her death registered more participants than last year’s. Sean Patrick’s time was cut short, but in it she achieved a greatness, that of a life meaningful to many.