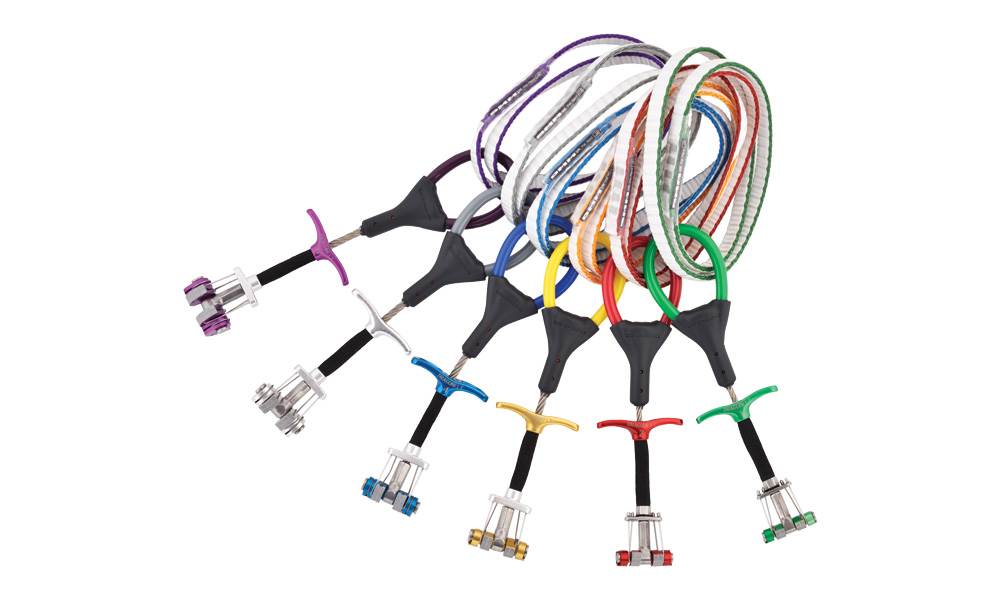 Size matters.  (I’m talking about cams, people, come on, look at the picture). With cams, the smaller they are, the sexier. DMM knows this—hence their new Dragonfly cams.

The #1 Dragonfly is the smallest cam on the market rated for dynamic forces. The bottom end of the #1’s camming range is 7.8 millimeters, the same as the legendarily tiny 000 C3 from Black Diamond, but the Dragonfly is rated to 6 kN as opposed to the 000’s 4 kN.

In reality, unless you’re climbing cutting-edge desert splitters like Hayden Kennedy’s Carbondale Short Bus, a 5.14 route where you need to nest micro-cams to keep yourself off the deck, the two smallest Dragonflies are seldom-deployed specialty pieces. I frequently place the four larger Dragonfly sizes, which collectively cover a range of 10.2 to 28.3 millimeters.

All six Dragonfly sizes proved their mettle in tricky, irregular placements. They fit in tiny little fissures where the heads of other cams were too wide. The flexible stem provides a bit of mental relief for any horizontal placements cantilevered over edges.

The three largest Dragonflies overlap in range with the smallest Dragons, DMM’s standard-range cams, but their head widths are considerably narrower, making them more versatile.

For aid climbers—those almost-extinct rare birds—the Dragonfly remedies a common gripe about the Dragons by adding a thumb loop. The Dragons’ lack of a thumb loop meant that aid climbers lost precious vertical inches with each placement. The new thumb loop also reduces fumbling when placing the units on free climbs. Each Dragonfly sports an extendable 11-millimeter Dynatec sling. With the Dragons, you could only pull the sling in one direction because the bar tack would get stuck if pulled the wrong way, something that bothered me to no end. But with the Dragonflies—once again thanks to the new thumb loop—you can extend the sling by pulling on any strand, any direction.

The portions of the lobes that bite against the rock have a raw aluminum finish, meant to hold better in slippery rock (we’re looking at you, Castleton Tower, with your oh-so-loathsome and slick calcite). I’ve yet to have any of the cams slip out, and in my experience they’ve walked less than other cams I’ve used.

Despite not having taken any massive whippers on the #2 Dragonfly, mine has developed some aluminum burrs after just a few months of use—slightly concerning in terms of durability, but ultimately irrelevant to functionality.