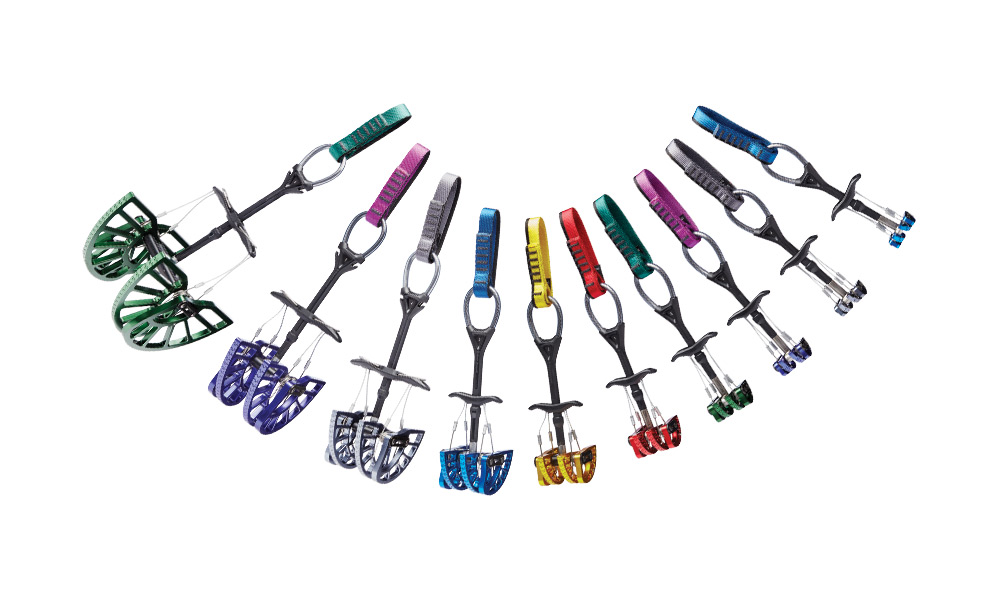 Black Diamond’s Ultralight Camalots were a game-changer when they came out in 2016: You could carry nearly four pieces for the same weight as three of the previous-generation Camalots.

An entire set of the new C4s, .3 to 6, is about 10 percent lighter than a full complement of previous generation C4s. Black Diamond shaved grams by “sculpting” the lobes and adding holes in strategic ways that still maintain the same kN strength.

The coolest new feature of the redesign is the trigger keeper present in the big sizes—#4, #5 and #6. It’s kind of like one of those K-Cup coffee makers—you didn’t know you needed it until you had it. Easy to use and less messy than going without. When you’re jangling up a route that requires the kitchen sink, the trigger keepers hold the lobes in the retracted position where they tangle less with other gear and are less bothersome when you move. Further, if you’re about to start up a miserable wide route the likes of which no one but Bob Scarpelli could love, armed with a whole bouquet of the new purple #5 and green #6 C4s, you’ll no longer feel like you need a “Caution: Wide Load” sign. Releasing the trigger keeper to place the large cams can be a bit of a jolt, as the cam lobes snap open rather violently, but thus far I’ve yet to have any snafus with the keeper getting caught.

I’ve tested these new Camalots on hard sandstone—like that of Eldorado Canyon— and some Colorado granite of less-than-Yosemite quality, and they bite just as reliably as my old C4s. The action is also smoother, and the four fully-colored cam lobes (versus only two colored ones on the older versions) help you more readily visually ID the sizes.

Another selling point is the new cams’ wider trigger. When viewed side-by-side with the older C4s, the increased trigger width is clear, though in practice the difference is subtle.

But then again, I’m already sold: Between the lighter weight, the trigger keeper, and the sleek new look—all on top of the same functionality that made the earlier generation my go-to cams—the new C4 Camalot is bound to become a climber favorite.