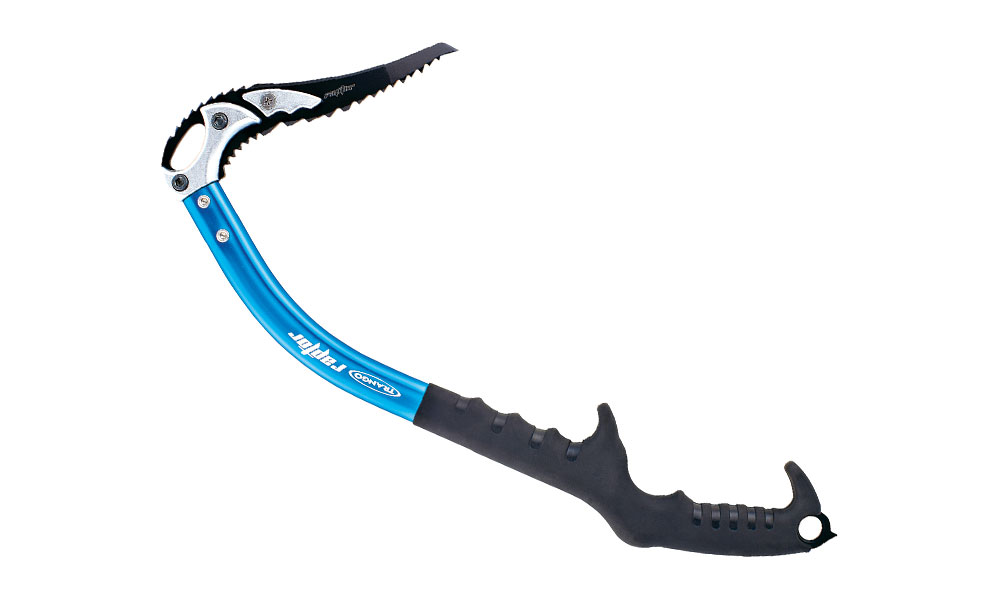 The Raptor gives you a hell of a bang for your buck.

f you’re looking for a solid ice tool, within budget, that swings intuitively, performs on steep ice, and will get you through some low-end scratchy mixed, the Raptor oughta be on your list.

I used the Raptor on 50+ pitches of ice last year, from alpine multi-pitch to ice cragging, and it held up to the beating just fine. The Raptors are neither light nor heavy, clocking in at around 20 ounces without the pick weights, which is industry average for a tool in their class. The pick weights come stock with the tool, though I removed them and never put them back on, mainly because the tool’s weight was distributed evenly without them.

Not ideal for steep mixed, the tool has a curvature that bells out two or so inches from plumb, which means, in most cases, using this tool on a 30-degree or more overhanging route will be a challenge, but that’s not their intended use. The lower grip is only slightly set back, indicating the tool is best for ice. I used the ice pick, which comes with the tool, and found it agile enough to get a good stick on first swing; the pick tapers from 3mm at the tip to 4mm where it attaches at the shaft. The middle teeth are aggressive enough that for big hooks on chopped-out ice, the tool never felt squirrelly. The compromise is that on sticks you have to earn, it’s a tad harder to clean the tool. Neither the ice pick nor the mixed pick has a hammer.

The clip-in point at the base of the tool is generous, big enough for a locking biner, and comes with a small spike. Likewise, the clip-in point at the head has plenty of room. As for the pick’s metal quality, the upkeep for sharpness was average, with the exception of some of the hot-forge picks that seem to be permanently sharpened. The ice pick was surprisingly versatile and well-conceived, with aggressive teeth on the head, and varying depths in the spikes as you travel from the front of the pick to the back. In fact, this is one of the best picks I’ve come across.

Because the handle isn’t bulky and has only a thin coating of molded rubber on the upper and lower handle, it plunges more easily into snow than other tools. On the other hand, the handle could be criticized as “thin and narrow,” and the grip will be a determining factor when you pick it up at the store.

Price and performance: The Raptor gives you a hell of a bang for your buck, given that, with a few exceptions, it can go head-to-head with tools nearly twice the cost.