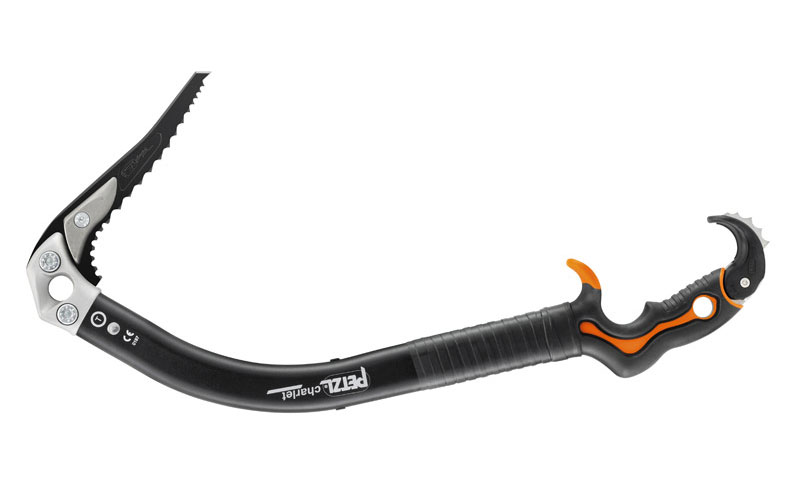 Since their introduction to the market roughly five years ago, leashless tools have revolutionized mixed climbing. Petzl’s Nomic is one of them. 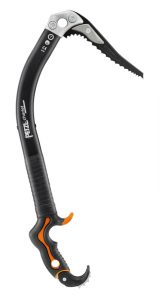 Since their introduction to the market roughly 10 years ago, leashless tools have revolutionized mixed climbing. “Matching” used to mean placing both picks on the same rock edge while trying to puzzle out a sequence. Now, you can match hands on either tool, greatly simplifying the whole climbing experience, as well as certain tasks like shaking out and placing gear. The new Petzl Nomic is the latest rendition of sans dragonne machines, and from what I’ve seen, one of the best.

Let’s start with the handle. Your only attachment to the tool is both ergonomic and adjustable, straightening one of the kinks of some of last season’s leashless tools. An Allen wrench lets you customize the bottom pinkie rest to one of three sizes. The process takes less than one minute, which you’ll appreciate if you switch gloves or share the tool with a different-sized partner. Above the main handle, the Nomic sports a pinkie rest for matching. Petzl has pimped this shelf with sticky rubber, saving you the effort of taping up.

The head of the tool is pared down—there is no hammer or adze, which could save your face when a tool pops. However, the lack of a hammer makes it impossible to place a piton, meaning these tools are for bolted, “sporty-mixed” routes. On the plus side, the lack of an adze/hammer allows the head to squeeze into much tighter situations such as cramped stein pulls. At 48 centimeters long, the Nomic feels “compact,” and extremely adept at solving modern cruxes.

The pick is a thick beast that comes nicely filed (though not enough for very thin conditions), and is hard. Despite my vicious and inaccurate swings, the pick hardly dulled at all after a few days at Vail’s famous mixed cave, where tapping the pick into the soft limestone until it hooks is weirdly acceptable.

Interestingly, the pick has a removable head-weight that sheds 2.2 ounces. The weight fixes directly to the pick near the head. When you leave the weight on, the swing is well-balanced and solid. Without the weight the tool checks in at a light 1 pound 4 ounces, making you feel more athletic, akin to climbing a sport route with the draws already up.

While the Nomic is recommended for rowdy dry tooling, it is not the greatest for low-angle ice. Just about every new ice tool, and some leashless tools, do a better job of keeping your knuckles away from the flow. But the Nomic is really meant for the high-performance acrobatics of modern mixed climbing.