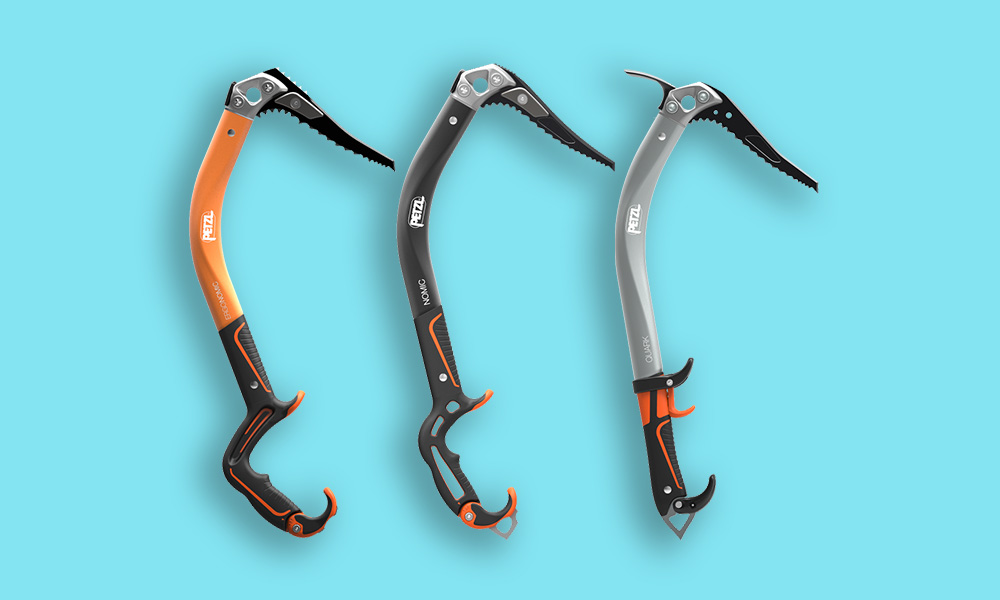 Petzl has been working on these three tools—one entirely new, the other two updated versions of existing tools—for years now.  Available fall 2018!

For fall 2018, Petzl is not only releasing a new ice tool, they redesigned their whole technical ice tool line, added a new “Pur’Dry” pick to the range, and updated multiple tool accessories. Pierre Plaze, Petzl’s sport product manager, says these changes have been in development since 2013, and they’re all coming out at once. We got to test out the new goods in Ouray, Colorado before the official product launch. Here’s the skinny.

The Petzl Quark, last updated in 2010, has some cool improvements for fall 2018. Starting at the bottom of the tool, the new Quark has a collapsible finger rest that locks in either an open or closed position. In the open position, the finger rest is business as usual, but a small spring-loaded pin allows it to fold up and in line with the tool’s shaft to create a lower profile. This might seem like small beans, but when plunging the tool for thousands of feet up moderate snow slopes, it will make a serious improvement in efficiency.

The locking pin to toggle the finger rest back and forth is fairly easy to press, even with gloves on, although it remains to be seen if it could possibly ice up. Because of the moving parts, the finger rest has 0.2 mm of play in either locked position. The wiggle is almost unnoticeable, but if it bothers you, Petzl built in an option to lock the finger rest in the open position with a screw and nut. With the update to the finger rest, Petzl also redesigned the shape of the stainless-steel spike at the bottom of the tool.

The 2018 Quark has an updated handle with improved ergonomics. According to Monsieur Plaze, he and the R&D team at Petzl played with different handle shapes and sizes, and found that a rectangular shape, as opposed to oval-shaped or round, was the most efficient grip. So on the new Quark, both the front and sides of the handle are flatter than the previous generation. The change of shape improves indexing (reducing side-to-side tool movement), and the handle is also slightly larger in volume to keep the hand in a more open and relaxed position with the idea of building less pump.

Moving up the shaft, the new Quark has the same adjustable upper finger rest as the previous generation, but a major update is the tool’s new hydroformed aluminum shaft. The shaft, where it curves, has a three-dimensional shape—narrower in the front and wider in the back—to create a better high grip for cruising up low-angle slopes.

If you are one of the handful of people who still climb with clipper leashes, you might be sad to hear the attachment hole in the middle of the Quark’s shaft is gone. Petzl decided to remove the hole for two main reasons: first, because no one climbs with leashes anymore, and second, because the hole was drilled at the weakest point of the shaft. Time to finally retire your clipper leashes! If you’re an old dog who cannot be taught a new trick, however, you always have Petzl’s V-Link tethers as an option, or can tie a leash through the head of the tool.

Another of the Quark’s major upgrades, which also appears on the new Nomic and Ergonomic, is the addition of a nylon plastic insert for the joint between the tool’s aluminum head and shaft. The plastic insert provides a tighter fit between the head and shaft, tempers stress, and strengthens the connection by 50 percent, according to Monsieur Plaze, who adds that Petzl has been developing the insert over the last three to four years. Moreover, the head of the tool is slightly lighter because less metal on the head is needed. Altogether, the head-to-shaft connection is stronger and less subject to micro fractures—commonly from one missing pitons with the hammer and hitting the back of the shaft—and therefore less likely to loosen over time.

The head of the new Quark is backwards compatible with previous generations of the tool, as well as cross compatible with the Nomic and Ergonomic for all four Petzl picks (Pur’Ice, Ice, Dry, Pur’Dry) and all head accessories (Marteau and Mini Marteau hammers, Panne adze). This modularity allows you to use your old stockpile of picks or trade picks and head accessories across tools for different types of terrain or conditions.

The Quark sells with Petzl’s versatile Ice pick (4mm at head tapered to 3.2 mm at tip) and either the “Marteau” hammer or “Panne” adze. Petzl reports the tool weighs 535 grams with the hammer or adze on—compared to 550 grams for the previous version, for a slight decrease in weight—or 465 grams stripped of head accessories.

BEST FOR: All things ice

As with the Quark, the new Nomic features the same nylon plastic insert for the joint between the tool’s aluminum head and shaft, and a hydroformed shaft (at the same angle as the previous generation). The 2018 Nomic also has a host of upgrades of its own.

New to the 2018 Nomic is a stainless-steel spike on the bottom. The previous generation had a wavy rib of metal, but nothing to clip tethers to. The spike, which is attached to the adjustable finger rest of the lower grip, is rated to 1.5 kN and is for tethers only, i.e. not to be used as an anchor point. To anchor off a tool, Petzl suggests clipping the head of the tool or threading a sling through the lower handle, which now sports weight-reducing (by 20 grams) cutouts.

The both the lower and upper grips of the Nomic are flatter in the front and sides, similar to the change seen in the Quark, for improved indexing and grip efficiency—less pump. The lower finger rest, now wider and slightly flatter, still adjusts between three sizes as the previous Nomic generation, and can be switched out for the spike-less finger rest that comes stock on the Ergonomic.

The upper grip of the Nomic has some significant changes as well. Gone is the tape, replaced by fiberglass-reinforced nylon plastic over-molded with a high-density rubber, like the lower handle. The bi-material handle is better insulated than the tape and should help to keep one’s hands warmer on the upper grip. Petzl also raised the upper finger rest by 1.5 cm for a small gain in reach. For those who bash tools ruthlessly, you’ll be glad to know that the upper finger rest is also stronger than the previous version, with more metal and hard plastic underneath, according to Plaze. In theory, this change should make it less susceptible to breaking. All in all, the upper grip and finger rest spec out to be much more durable than the previous generation.

The 2018 Nomic comes with Petzl’s Pur’Ice pick, pick weights and Mini Marteau hammer—all of which have been updated for 2018. The new Pur’Ice pick will have micro spikes on top, like a mini version of Petzl’s Dry pick, to provide traction on the head of the tool. The Mini Marteau will be wider than the previous version to provide better protection to the head of the tools, and will now come stock on the Nomic and Ergonomic. Along with protecting the head of the tool, the mini hammer is good for driving (or resetting) an occasional pin, clearing loose ice and choss, and testing suspect holds. Lastly, Petzl also updated their Masselottes pick weights. The 2018 pick weights have a new tapered design, narrower in front and wider in back—now wider than the head of the tool, to help protect it in cracks. The new shape will provide more purchase in unconsolidated snice as well as a wider range of crack sizes. The weights are compatible with older generations of Petzl picks.

At 605 grams, according to Petzl, the new Nomic weighs the same as the previous generation, and that’s with the addition of the mini hammer. Stripped of the hammer (20 grams) and pick weights (65 grams), the 2018 Nomic nearly gets down to 500 grams, which is nipping at the heels of carbon fiber tools.

The new Petzl Ergonomic is a hybrid between the current Petzl Ergo—which the Ergonomic will replace—and the 2018 Nomic, leaning closer to the Nomic side of the blend. The Ergonomic essentially takes the head and shaft of the 2018 Nomic and adds a much beefier, more inclined handle designed for steeper climbing, pick stability and maximum hang time. In other words, it’s the next step up from the Nomic, intended for difficult ice and mixed.

While its head, with the new plastic insert, and new hydroformed shaft are the same as the 2018 Nomic, the handle of the Ergonomic is what really sets it apart. The Ergonomic has a larger grip that is solid (no cutouts or indentations) to maximize surface area for glove-to-rubber contact, and to keep one’s hand in a more open and relaxed position to stave off pump. The handle is also significantly flatter on the front and sides—the most efficient design according to Petzl (members of the Petzl R&D team actually hung from different handle shapes and sizes until failure, while timed, to reach this conclusion). Conrad Anker, a Petzl athlete, likened the shape of the Ergonomic’s handle to a hockey stick. “It makes a huge difference,” he says. Furthermore, the Ergonomic’s handle is more inclined than the Nomic’s to help the climber maintain a neutral wrist position (uses less energy) in steeper terrain.

In sum, the Ergonomic has the ideal handle for hanging on for a long time on steep ice, mixed or dry terrain, but it also swings well into ice—something the Ergo did not do well. The Ergonomic swings similarly to the Nomic, requiring a little more wrist flick and open hand. For those who use the Nomic and desire a more advanced and versatile tool, the transition to the Ergonomic will feel seamless.

The Ergonomic comes with Petzl’s Dry pick (4 mm tapered to 3.2 mm at tip), updated pick weights and updated Mini Marteau hammer at a claimed weight of 635 grams. The tool does not come with a spike on the lower finger rest (no tether attachment), so you won’t impale yourself if a tool pops from a stein pull, but you can always switch out the finger rest for the spike version that comes on the Nomic. The third, highest finger rest found on the Ergo also does not appear on the new Ergonomic, but the Ergonomic’s hydroformed shaft does provide a decent high grip on the tool.

All accessories—four pick options; two hammers and adze; and pick weights—are all cross-compatible between the three tools as well as backwards compatible to previous generations. Petzl’s two grip rests for the Nomic and Ergonomic are also cross compatible.