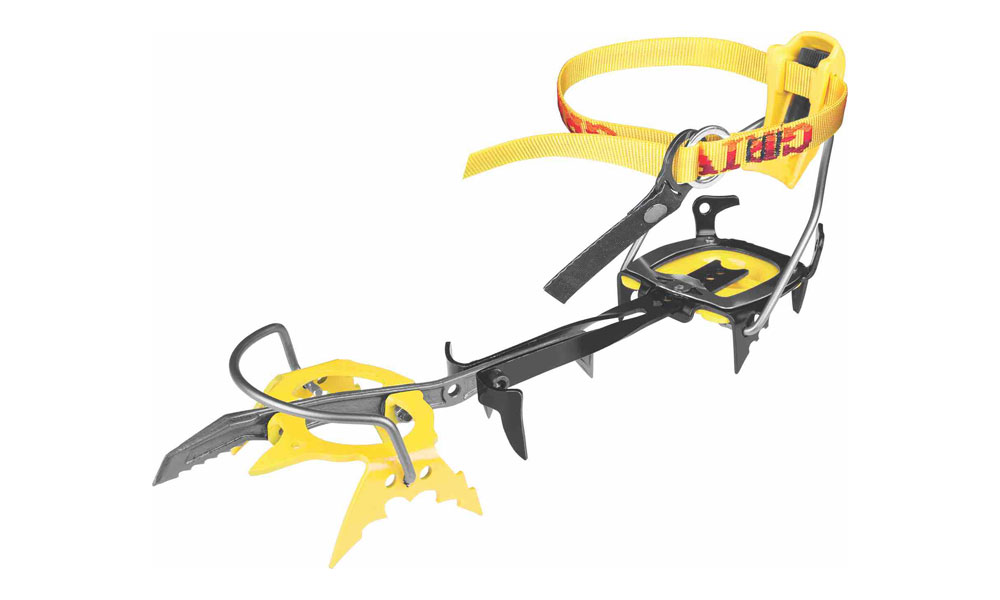 The G20 Plus is a tough, performance-oriented mono-point.

Grivel’s G20 Plus is a high-end mono-point crampon, at home scratching around in the alpine, kicking into steep pillars, or catching the afternoon rays as you sit, boots out, brewing tea halfway up Cerro Torre in winter.

For starters, the G20 Plus is easy to put on and adjust. To adjust length, you simply pinch and pull the metal clip and slide. Viola. The front bail adjusts as well, to lengthen the front point. For major adjustments in length, you’ll need a hex, and one bolt suffices. As for refining the tension, the small spindle wheel above the back heel dials in the fit in mere seconds.

The G20 Plus crampons are redesigns of the G20. The notable update includes a replaceable, longer and more downturned front point. Three hex bolts now enable you to replace the main point, which was lacking on the G20s. Only the heel has an antibott plate to prevent snow build-up

I used these points exclusively over last year’s ice season, and true to form, Grivel’s forged steel is so tough I only needed to file them twice. If you want a steeper downturned toe for hard mixed routes, you’ll be moving onto competition-style mixed boots. So yeah, the G20s are an all purpose, Alps or water-ice virtuoso.

As for the front bail I’ve used them with three different types of ice and alpine boots, and had no problem with fit. Always, the bail slides right in. As a rock climber, I appreciated the asymetrical shape and position of the front point over (roughly) the big toe. This positioning gives power to your front toe and feels natural. Because the front point only has a small accompanying point—a horizontal and much shorter mini-point—the main point is able to dig deep into seams and picked out placements. Forgot your crampon bag? No problem. Fold the G20 Plus in half.

A pair of G20 Pluses weighs 31.4 ounces, making them one of the lightest technical all mountain mono-points on the market. They retail at around $220, average for a crampon of this sort. Overall, the G20 Plus is a tough, performance-oriented mono-point.