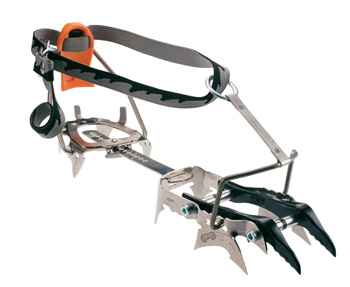 These are the lightest steel crampons in the world. Paired with Scarpa’s new super-light Phantom Guide (reviewed here), they create a performance combo that nearly competes with a fruit boot, but is warmer, and more versatile.

These are the lightest steel crampons in the world. Paired with Scarpa’s super-light Phantom Guide, they create a performance combo that nearly competes with a fruit boot, but is warmer, and more versatile.

Everything about the Vector is trim. Formed from 1.8mm thick (compare to BD’s stainless thickness of 2.5 mm) Nanoflex stainless steel, the frame and side-points are thin. Benefits are twofold. The thin points easily penetrate hard ice, and, of course, less metal means less weight. The points under your forefoot, however, do flex when you really torque them. I’m 145 pounds and experienced minimal flexing; much heavier folks might over time bend the points. The replaceable front-points are carbon steel, and you can configure them as monos or dual points with an accessory conversion kit.

The side-point orientation is good. An aggressive pair of secondary front-points stabilizes the main front-points and edges well on rock. Behind the front set of points the frame angles sharply in; the points may not line up with the edge or your boot (mine didn’t). In snow, the side-points felt too short, especially for plunging down a slope, facing out. The shorter side-points, however, do place your boots closer to the rock or ice, so the crampons feel less stilt-like than most, which I liked.

The Vector is a one-size-fits-all crampon that easily adjusted to my size 42 boots. If you have a smaller boot, however, you may need to saw off the instep bar to prevent it from protruding past your heel. A micro adjustment thumb screw on the heel lever fine tunes the fit, but can be difficult to manage when your hands are cold or gloved (adjust at home, while watching Monday Night Football).

I used the Vector Nanotech last winter on ice and mixed, and again at the beginning of the 2009 season. It would take several more years to arrive at any definitive conclusions for durability, but I can say that the points remain quite sharp despite having been used on rock. Anecdotally, they seem to have held up better than carbon-steel points used for the same applications.

The Vector Nanotech is an impressive, if expensive, crampon. If saving weight is one of your top priorities, this crampon is for you as long as you keep in mind that one of the reasons the crampon is lightweight is because the frame is small: The side points set back from the edge of the boot, a feature you may or may not like.

On alpine and mixed routes and waterfall ice, it feels deft and precise. In snow, the vertically oriented cookie-cutter frame shape are terrible for balling up. For mountaineering, I’d attach the optional anti-balling plates (3.6 ounces, not tested.)

I gave these four instead of five stars because they are expensive and ball up.