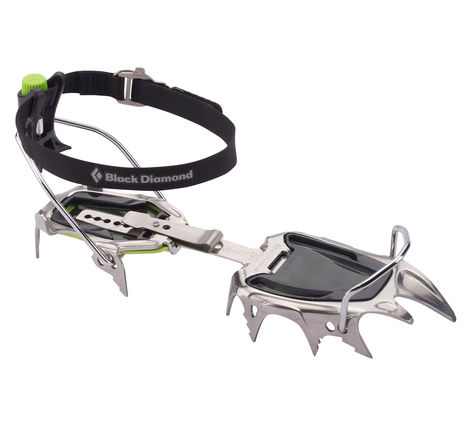 The first crampon of this sort, the Snaggletooth has one front tooth: a wide, almost spoon-like monopoint that protrudes like an extension of your big toe. A stubby, secondary frontpoint rides shotgun.

The Snaggletooth is an eyebrow lifter. Like the name says, the crampon has one front tooth, a widish, almost spoon-like monopoint that protrudes like an extension of your big toe. A stubby, secondary frontpoint rides shotgun. The Snaggletooth is the first crampon of this sort, and that merits investigation.

The crampon is stainless steel like BD’s other crampons, and is essentially a modified version of their Sabretooth, with built-in antiballing plates, an easy to use micro-heel adjuster, and an instep bar that adjusts in seconds to fit the length of nearly any boot. You will notice that BD has eliminated the toe strap on the toe bail.

The Snaggletooth splits the difference between horizontal frontpoints and a vertical monopoint. A vertical monopoint, as you well know, is the cat’s meow for rock and steep ice, but slices through snow and soft neve. Imagine a cat with one claw trying to get up an icy slope. For that slope you want the purchase of horizontal frontpoints, but when you hit hard ice, you wish you had the mono. What to do?

The Snaggletooth’s wide mono shines on mixed ground. In alpine gullies and on slabby, rubbly rock, that burly frontpoint has good bite and close to the stability of a vertical monopoint. In snow and neve it holds much like traditional horizontal points.

On hard ice, the Snaggletooth isn’t as destructive as two horizontal points, but is a bludgeon compared to a more scalpel-like vertical monopoint or point(s). I climbed vertical, hard ice in the Snaggletooth and never felt locked on, and had to kick harder than usualto get the point in the ice. The Snaggletooth is sufficient for the odd patch of steep ice, and that is good enough for alpinists desiring a do-it-all crampon for changing terrain.

I do wish BD would sell the front section by itself, so you could mix and match the Snaggletooth’s monopoint with other BD crampons that use the same or similar heel piece and connector bar. As is, $200+ is a lot of bread for just a different frontpoint, and doubly so when you wear it down and have to replace it.