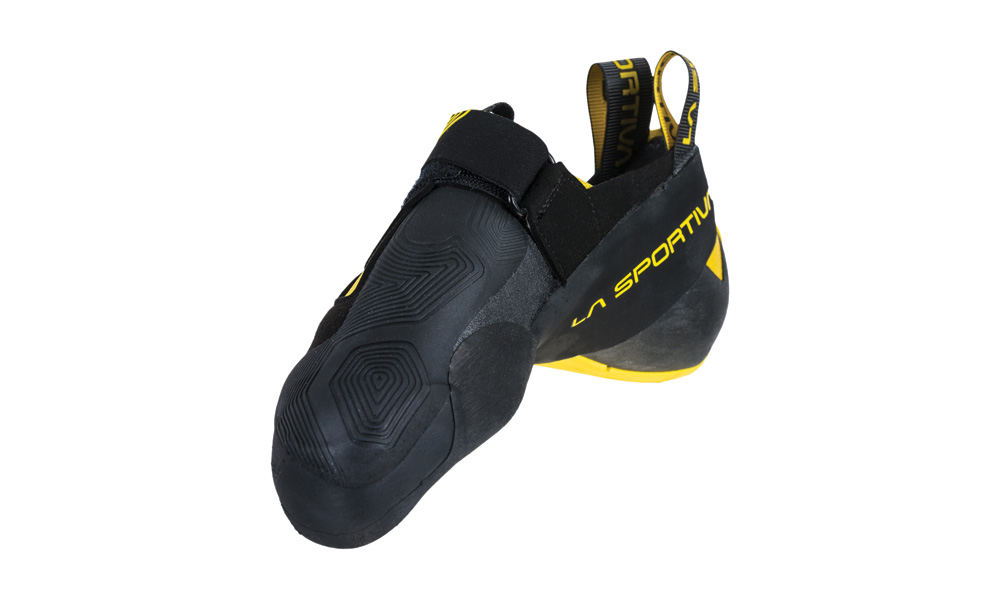 Despite being marketed for indoor bouldering, the La Sportiva Theory is excellent for sport climbing on slippery limestone, and to some extent, pockety sandstone.

To be honest, I really, really liked the La Sportiva Theory. And I don’t say “really” often, much less twice.

The new La Sportiva Theorys can be described in three words: Soft. Supple. Slipper. The other day while wearing them in Rifle, when I felt my foot starting to slide on one of the myriad of glossy blocks, all I had to do was curl my toes to stop the otherwise inevitable slip.

The Theory was crafted as a part of La Sportiva’s Olympic Trio, along with the Solution Comp and the Cobra 4:99. Specifically, the Theory was curated for modern bouldering (read: volume hopping and parkour-style moves). It’s made with a combination of La Sportiva’s No Edge and edge technology, which amounts to an edge at the toe and no edge on the sides of the shoe, allowing today’s plastic pullers to easily roll on and off volumes, while still maintaining some (not much) edging ability.

The shoe is constructed with La Sportiva’s most aggressive, asymmetrical last—the P85—which helps the climber dig into holds or hook onto volumes. The heel cup is low volume and narrow, and a slingshot rand locks it in nicely. The toe box, or rather the entire front-half of the shoe, is encased in rubber that ranges from 1.9 to 4 millimeters of Vibram XS Grip-2 (Vibram’s softest). Added touches: the shoe has a split-sole construction, contributing to the shoe’s flexibility, plus no footbed, enhancing sensitivity.

Despite being marketed for indoor bouldering, the La Sportiva Theory is excellent for sport climbing on slippery limestone, and to some extent, pockety sandstone. After six or so pitches, you’ll be psyched to take these puppies off, especially if it’s hot and your feet swell.

As a female climber with feet on the narrow side, I went with the women’s version (which is a welcome black and hibiscus color). It’s been several months of testing and they still stick to my toes so perfectly that after undoing the Velcro strap and removing the heel cup, I have to pry the things off. Expect very little stretch. Size according to your Testarossas, or about a whole number size down from your Solutions.

The outer soles are wearing, but plenty of mileage is left. At $190, they’re not cheap, but that seems to be the going rate for nice soft shoes these days, and you get what you pay for.