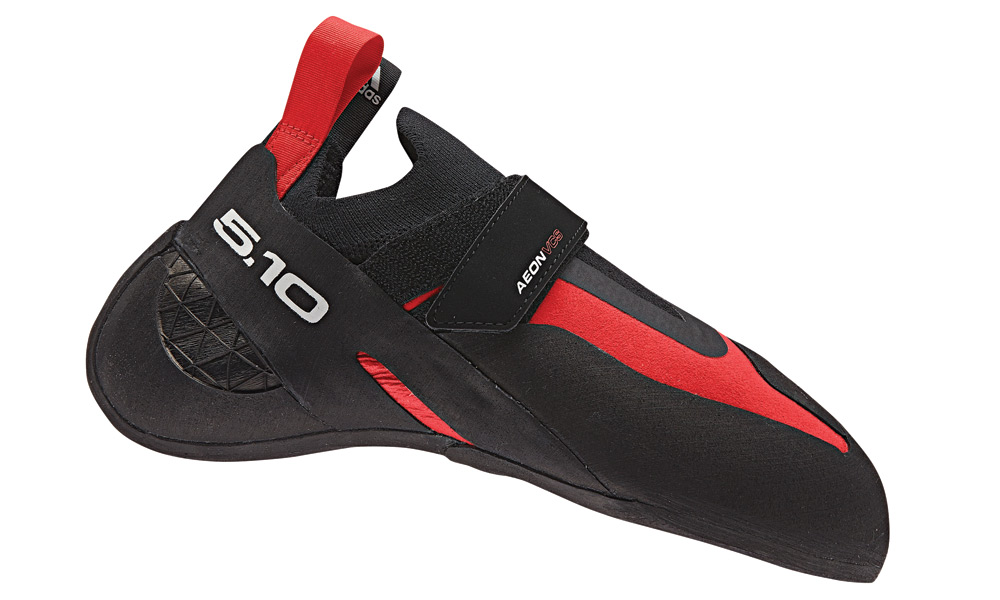 A bouldering or steep sport shoe designed by the legend Fred Nicole.

The new Five Ten Aleons want you to climb harder. How could you not?—you’re wearing a shoe designed by Swiss boulderer Fred Nicole, a legend with more double-digit bouldering FAs than anyone alive, and the first person to boulder V14 and V15.

The Aleon is a one-Velcro performance shoe, bouldering or sport, with a slightly downturned toe and 6/10 stiffness. I’ve had the Aleons for about six months and have done my best to destroy them, which I have not succeeded in doing. The marketing material states they are “medium-stiff,” and that’s on the money, due to a robust midsole. Sole rubber clocks in at 4.2mm, .2 above industry average. This is not a spineless flipper of a shoe, as many of the current “gym-performance” shoes are, which isn’t a put down, just that the Aleon has body, wafts of techy-vert, notes of good edging and a nose of semi-steep pocket pulling.

Most of the performance shoes in the Five Ten line-up have rounded toes, such as the Dragon VCS, Hiangle, Quantum or Team. But not the Aleon. It has one of the sharpest toes not only for Five Ten—akin to the Verdon—but on the market. That alone distinguishes this shoe and makes it a useful arrow in the quiver. The aggressive shape will be excellent for those with an “Egyptian toe,” as I recently learned I have. Those with wide feet will also like this shoe, given its roomy front half.

The initial fit of the heel was an early concern, as my heel didn’t fall super snug into the bottom of the shoe. That sensation did change a bit after the shoe wore in, but the feeling that the heelcup is a tad shallow remains. Though I have to say, I purposely tried to get the shoe to pop off my heel on multiple occasions by trying aggressive heelhooks, but I wasn’t able to succeed. A thick band of rubber at the back of your heel, however, pays off with precision, as you can dial it in to whatever your heel desires.

As expected, plenty of rubber for toe-hooking. For the uppers, the Aleon uses Adidas Primeknit, a pliable, stretchy weave material, and synthetic microfiber for the rest. With the exception of the Dragon VCS, the landing for the Velcro is wide for their line-up, translating to more options to dial in the single strap; getting the shoe on your foot measures in about V6 for effort. And heads up, the shoe barely stretched, about a quarter size, max. As for the fit, ordering to your street size will get you a very snug fit.