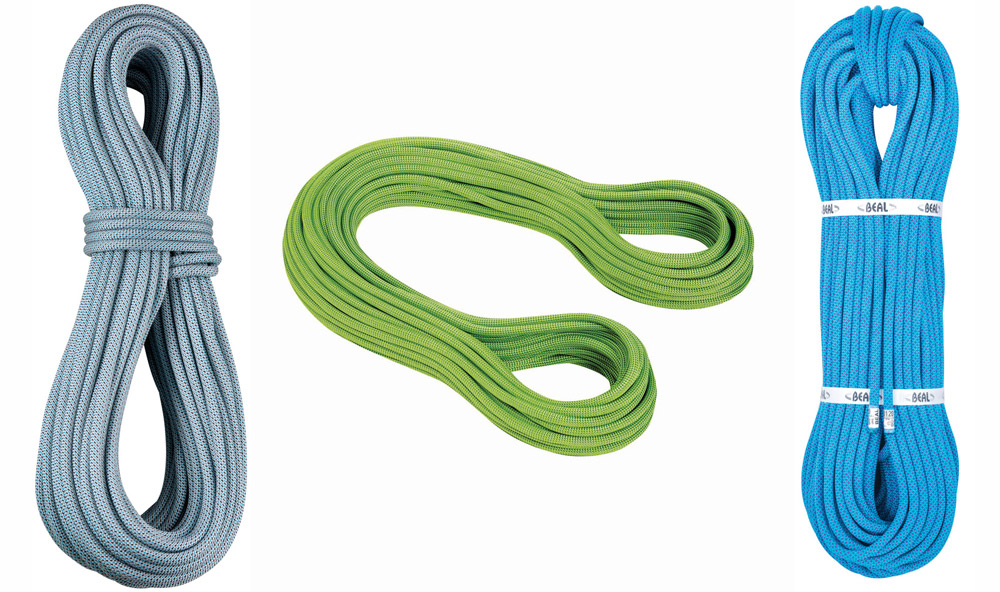 Unlike Americans, climbing ropes are getting skinnier every year. Take, for example, the new breed of ultralight ropes for sport and alpine climbing: the Beal Opera, the Edelrid Corbie and the Mammut Serenity.

UNLIKE AMERICANS, climbing ropes are getting skinnier every year. Take, for example, the new breed of ultralight ropes for sport and alpine climbing: the Beal Opera, the Edelrid Corbie and the Mammut Serenity. This trio is 8.7mm at the fattest, and 51 grams a meter at the heaviest. For a 70-meter rope, the difference between a 10.2 mm and one of these skinnies is nearly two and a half pounds. All three cords are rated to five UIAA/CE falls, the minimum for single-rope certification, and are also rated for double and twin use—these ropes do it all!

Be aware that small ropes are light because they have less nylon—meaning they can cut more easily and wear faster than thicker ropes, and none of the three I reviewed are recommended by their manufacturers for use with the GriGri 2. Although I used each rope with an ATC-style device, I figured that most sport climbers would, despite the warnings, still belay with a GriGri 2. So, I also tested the ropes with a GriGri 2. All three ropes did slip in a GriGri 2 when they were new and slick, but once their initial sheen wore off, they all caught and held without issue. 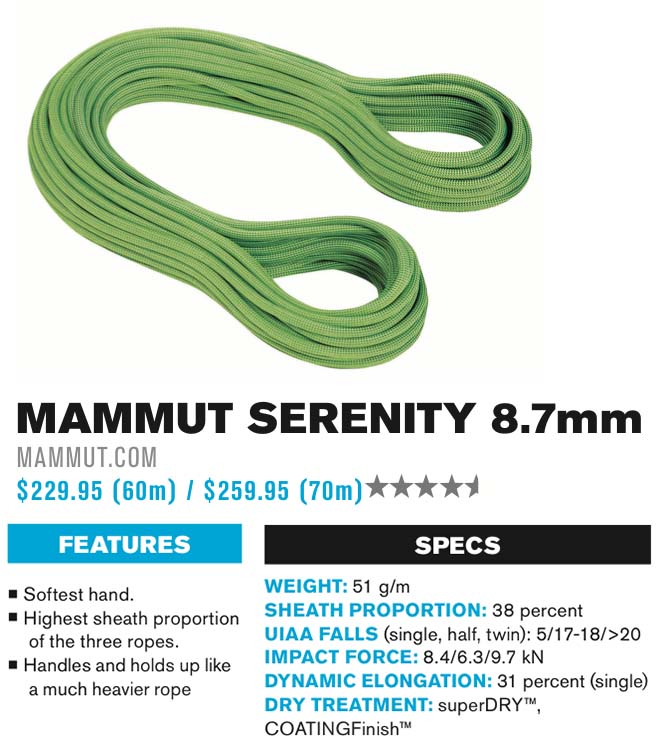 THE SERENITY, Mammut’s flagship small-diameter single line, has recently dropped two-tenths of a millimeter in diameter and one gram per meter in weight. The rope has the softest, most flexible hand of the three tested, creating a luxuriously dynamic catch, though the result was that I sometimes had difficulty untying my knot after a big whip. The Serenity features Mammut’s superDRYTM on both the core and sheath, as well as proprietary COATINGfinish treatment to reduce friction between fibers and improve overall strength and water resistance. With the largest diameter and the highest sheath proportion of the three, the Serenity was also the most durable of the lot I tested.

ABOUT THE RATING: The lightest, skinniest single rope available that still holds its own when it comes to durability. 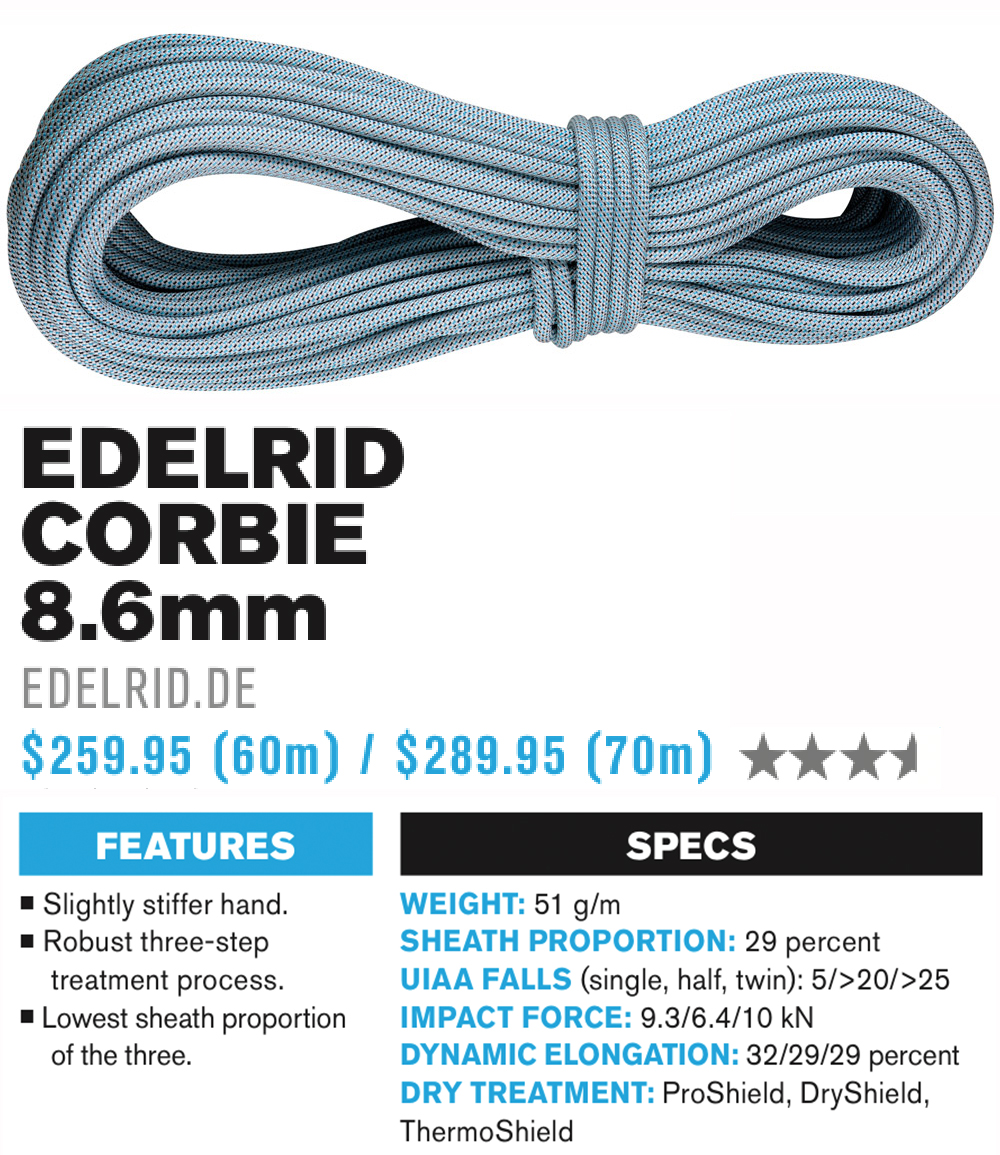 THOUGH IT EXPERTLY caught some massive whippers at the sport crag, the Corbie has a slightly stiffer hand than other ropes, and I found it to be ideal for ice and alpine climbing. The rope was easy to handle and easy to tie and knot while wearing gloves, and it also seemed less likely than other ropes to hang up during rappels. It is also slightly easier to untie from after a long or hard fall. On the down side, it has the lowest sheath proportion of the three, and after some mileage on sharp limestone and abrasive granite, was the first to show serious sheath wear.

The Corbie features a robust three-part treatment process. Both the core and sheath fibers are treated with Edelrid’s DryShield treatment, as well as ProShield, which bonds microscopic Teflon particles to the nylon fibers to increase strength and water resistance. Edelrid’s ThermoShield uses a heating process to prevent the rope shrinkage that can occur over time and ensure a 70-meter will stay that length—crucial for rope- stretching sport pitches and alpine rappels.

ABOUT THE RATING: The thinner sheath showed wear faster than the others.

WITH A DIAMETER normally reserved for half ropes, the Opera is the skinniest single- rated rope on the market and the first to break the mythical weight barrier of 50 grams per meter. With a tight-knit sheath and a medium- stiff hand, it was also one of the most durable. Beal’s Golden Dry treatment is applied to every strand of the core and sheath, and kept it from absorbing any water when I dropped the rope into a creek. In both handling and performance, the Opera is much like a slimmed-down version of the Joker, Beal’s 9.1, one of my favorite skinny cords.

The Opera has the most stretch of the three, around five percent more, something to consider when taking big whips with a lot of rope in play. But if trimming the fat is your top concern, the Opera could be the solution.

ABOUT THE RATING: The soft sheath made it tough to untie the rope after big falls.