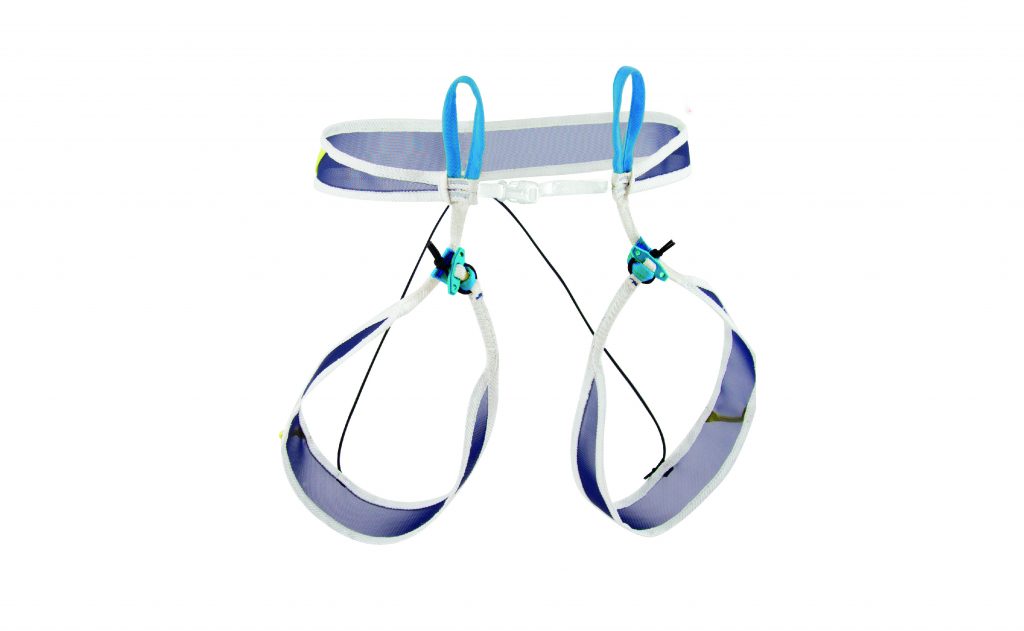 I was tempted to fall into the trap of cliché and write that the Choucas Light is “butt floss.” Although that would have been an apt visual, I won’t debase myself with it. Instead, let’s say the Choucas is “lingerie … such as you find at Victoria’s Secret.”

Weighing a scant three ounces, the Choucas may be the lightest harness ever. Although seemingly made of mosquito netting and shoestring, the Choucas Light is assembled from high-strength Dyneema and a proprietary woven product that I won’t describe because it is only comprehensible to people who can split atoms.

The Choucas Light is dope simple. No buckles. No padding. No belay loop. The leg loops secure by threading an aluminum hook through a webbing loop, Amish style. This is easy to do, is secure, and you don’t have to remove crampons or skis to harness up or off. When you aren’t tied in, a tiny, non-weight-bearing, plastic buckle holds the harness on you. 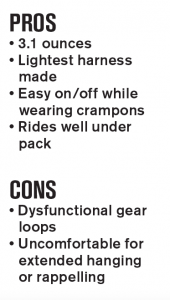 The Choucas Light is meant for ski touring, alpinism and ice climbing. I used it during 50+ ice and alpine outings. Fitting in the palm of your hand, the Choucas takes up almost no room in a pack. Once it’s on, you hardly notice it, and it is so slim it rides with no bother under a pack waist belt. I missed having a belay loop, but got used to clipping through the two tie-in loops, which have the unique benefit of keeping your knot out of the way of your pack waist belt. Two gear loops, one on each hip, hold a couple of carabiners, but are too tight to be useful.

Sport climbers will probably look at the Chouca’s 3-ounce weight and think, “Hey, I can use this for redpoint burns!” The Choucas Light is CE- and UIAA-certified, but hanging in it isn’t pleasant, a point magnified when you aren’t wearing winter insulation. This is an alpine harness. Hang in it sparingly.

Giovanni Rossi started Blue Ice in 2008 out of a garage/dojo that opened to a vista of Mont Blanc. Stitching harnesses and packs for his mountain-guide friends, Rossi was old school, running things as they were back in the 1950s and 1960s when certain other climbers made pins and pants for their buddies. Today, Blue Ice’s crew numbers about 20, and the line includes 11 packs, an ice tool, another harness—the “Choucas”—and, they say, more gear will be unveiled this summer. Stay tuned.