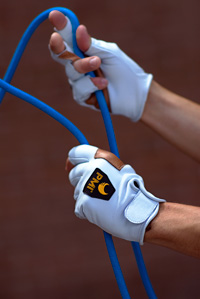 LOOK AROUND THE nation’s top sport-climbing areas and you’ll see all the hotshots feeding slack and catching falls while outfitted in various makes of fingerless gloves.

LOOK AROUND THE nation’s top sport-climbing areas, and you’ll see all the hotshots feeding slack and catching falls while outfitted in various makes of fingerless gloves. Until recently, I dismissed these people as soft-handed patsies, and I never pulled on gloves except to new-route, aid climb or lay bricks. I’ve now joined the hordes and wear gloves to belay and rappel, and anytime I’m handling cord. Why? Look at your hands after a day at the crag. The gunk that’s tattooed into your palms is equal parts dirt, fabric softener (dry treatment) and aluminum-oxide. In recent years there’s been discussion in the media about the possible adverse effects of aluminum on human health, including its role in Alzheimer’s, Parkinson’s and Lou Gehrig’s diseases. Some studies dismiss these claims, but most sources hedge by saying the risk is still undefined. Wearing gloves is an easy way to keep aluminum off your hands and out of your body. The main reason I wear gloves, however, is that clean hands stick better to holds. You scrub the dirt off those slopers before your redpoint burn, don’t you? Might as well keep your hands clean, too. Finally, gloves protect your precious climber skin. (Then again, so do calluses.)

The best ones I’ve found are PMI’s Fingerless Gloves. These supple goatskin gloves have leather that extends down the fingers far enough to effectively protect your hands while allowing enough dexterity to fiddle with gear. I love the leather pull-tab between the middle and ring fingers, which makes removal a snap—a real plus for those of us with large mitts. These run small, so order a size up.