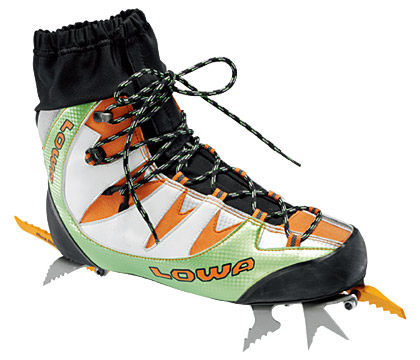 Sporting an, over the ankle upper, the Lowa Ice Comp, which came out in 2005, is the most boot-like of the fruitboots I have tested. It’s practical, warm enough for winter days in Colorado (that is down to about 20 F) and is the model that Ines Papert rages in, which says enough right there.

When fruitboots first came out I figured that there would be a mad rush to the check-out counter. What ice or mixed climber wouldn’t want a pair?

Fruitboots compared to the traditional mountaineering boot and crampon combo, are lighter, more precise, and vastly superior except in the area of warmth. Fruitboots are to ice and mixed what rock shoes are to rock.

Boy was I wrong. Fruitboots didn’t sell, probably because they are pricey and you can’t hike in them, and most companies quit making their versions. Today, the Lowa Ice Comp may be the only fruitboot in stock, in sizes.

With an, over-the-ankle upper, the Lowa Ice Comp, which came out in 2005, is the most boot-like of the fruitboots I have ever tested. It’s warm enough for winter days in Colorado (that is down to about 20 F) and is the model that Ines Papert rages in, which says enough right there.Weighting two pounds per boot, the Ice Comp is much lighter per foot than a standard boot with crampon. On modern mixed terrain (mostly steep rock), the Ice Comp felt like a Ferrari compared to my regular boots. The spongy foam and leather upper lacks the cast-like rigidity of a plastic or all-leather boot, but I didn’t miss the support, tending to edge and “smear” as much as frontpoint. The foam and thin rubber rand, however, did get punctured by the crampons. A GoreTex lining and Primaloft insulation complete the boot’s weatherproofness.

Lowa bolts a Black Diamond Raptor crampon to the boot. This is my favorite of all the fruitboot crampons. It’s easy to sharpen, the points are stiff, you can easily switch out the frontpoint when it wears down and the secondary points are raked forward so they support the frontpoint when it is buried in ice. The side points also edge well. The Raptor quickly unbolts for quick replacement, which you’ll need to do each season if you do much rock work and frequently sharpen the points.

Compared to the other fruitboot I’ve spent a lot of time in, the Asolo Comp XT ($670; now in very limited supply), the Lowa version is a bit bulkier, softer and warmer. On the Lowa, I miss the integrated gaiter on the Asolo, then again, the Lowa doesn’t have a zipper to blow out. And zippers do blow out, especially on fruitboots, which are subjected to abrasive rock.

At $675 the Lowa Ice Comp is a serious purchase. Worth serious consideration for anyone looking to break into the realm of M climbing.