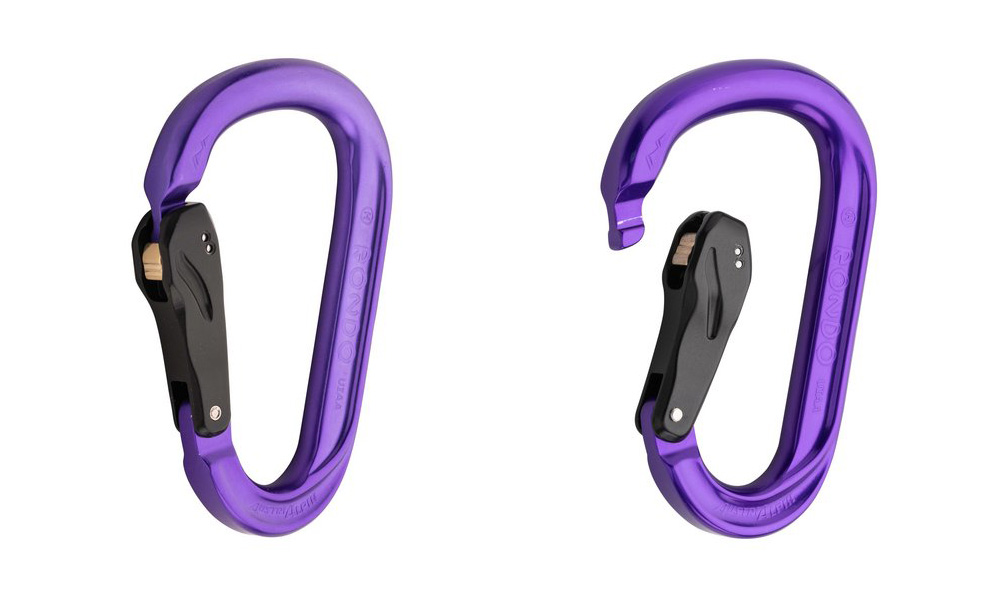 The Slide locking mechanism is a pretty neat innovation. According to AustriAlpin, it is the “world’s fastest autolock.” Big claim. Are they right?

Locking carabiners come in few different varieties: You’ve got your standard screwgate locker. Then you’ve got your autolocking twist-lock biner. There are the rarely-seen-in-the-wild  but oh-so-sexy Black Diamond Magnetron autolocking biners. And then of course, you’ve got Grivel’s wild twin-gate autolockers, which have two opposing gates integrated into the design. For a while that was pretty much it.

Edelrid shook things up with their slider locking carabiner several years ago, and now there’s another carabiner in town using a similar locking mechanism: AustriAlpin’s HMS Rondo Slide Autolock Carabiner. (Sure, the name is a bit cumbersome. But it’s not reflective of the Rondo Slide Autolock’s performance—which is impressive, to say the least.)

Again, it’s easier to see just see it. Skip to around 1:15 in the video below to see the locking mechanism in action.

The Slide locking mechanism is pretty neat. According to AustriAlpin, it is the “world’s fastest autolock.” Big claim. Are they right?

In well under a second, the slide on the Rondo can be opened from the locked position with a single finger (likely to be your thumb, middle or index finger; I found thumb to be much more natural when the carabiner was right-side up, middle finger when it was inverted). Clearly screwgates and twist-lock carabiners require more than one finger and a bit more manipulation to open them. I haven’t used dual-gate biners, so can’t speak to those. Magnetrons can be opened extremely quickly, but you do need two fingers to disengage the dual locking mechanisms on either side.

The advantages to a system like the Slide Autolock are pretty clear. You can open it super quick—unlike a screwgate—and it automatically locks when the gate snaps back into place, like Magnetron, twist-lock and dual-gate designs.

One concern that a would-be users will rightly have is the reliability of the slide’s autolock function. How much force does it take to disengage the mechanism? Might it accidentally unlock from rope vibrations or gear jostling? AustriAlpin ensured this can’t happen by securely embedding the brass slider in the gate. Opening it requires a deliberate and firm action from the user. I had no issues with it opening inadvertently.

Ultimately, I found this carabiner’s functionality to be exceptional. Maneuverability of the slider with gloves on can be vexing, so maybe not the best cold weather locker option. (Additionally, as I have not tested it in cold weather, I cannot attest to how easy or difficult it is to operate if the locking mechanism ices up.)

Finally, the price. At only $16.95 AustriAlpin’s HMS Rondo Slide Autolock Carabiner is nearly half the price of Black Diamond’s Magnetron, which is to me the only real rival in terms of speed and ease-of-use in the small class of autolocking carabiners (other than the Edelrid sliders, of course).

So: Is the Rondo the fastest locking carabiner on the market? After testing it in a bevy of different scenarios, I still can’t say for certain—there are a lot of lockers out there. But I certainly think so.