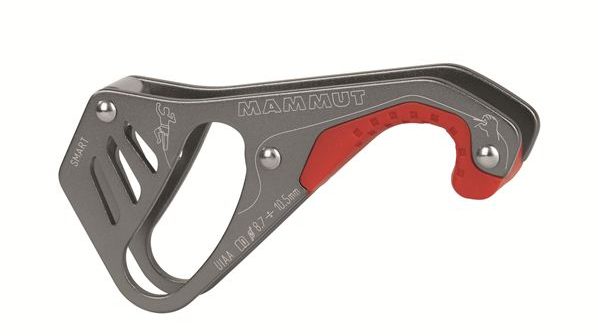 Mammut bills its Smart device as a tool for gym and sport climbers.

Mammut bills its Smart device as a tool for gym and sport climbers, and this no-frills “auto-locker,” designed to brake at even low levels of force, will work for those applications. The $50 price tag will further entice frugal climbers looking for the convenience and safety of traditional auto-lockers, which typically cost nearly $100. I used the Smart a lot last summer and quickly realized that it locks more readily than other devices, and lowering, rappelling or feeding slack can be jerky until you master the technique. After a few test runs I had it down, but the Smart was never as easy to operate as a Grigri. That said, the Smart offers advantages over other auto-lockers that extend beyond sport and gym venues. For example, the Smart weighs five ounces less than the Grigri, and I enjoyed the weight savings on multi-pitch outings where I could rig it at the anchor and more easily hold my partner if he fell. Like the Grigri, the Smart doesn’t work with double ropes. The Smart works with thin ropes—from 8.9 to 10.5 mm,  though the Faders Sum also takes ropes down to 9.1 mm. In the final analysis, this single-rope device doesn’t quite deliver the smooth-as-butter action of traditional auto-lockers, but is serviceable and light, and the price is right.

—Least expensive of the auto devices.

—Jerky, but smooths out once you get the hang of it.