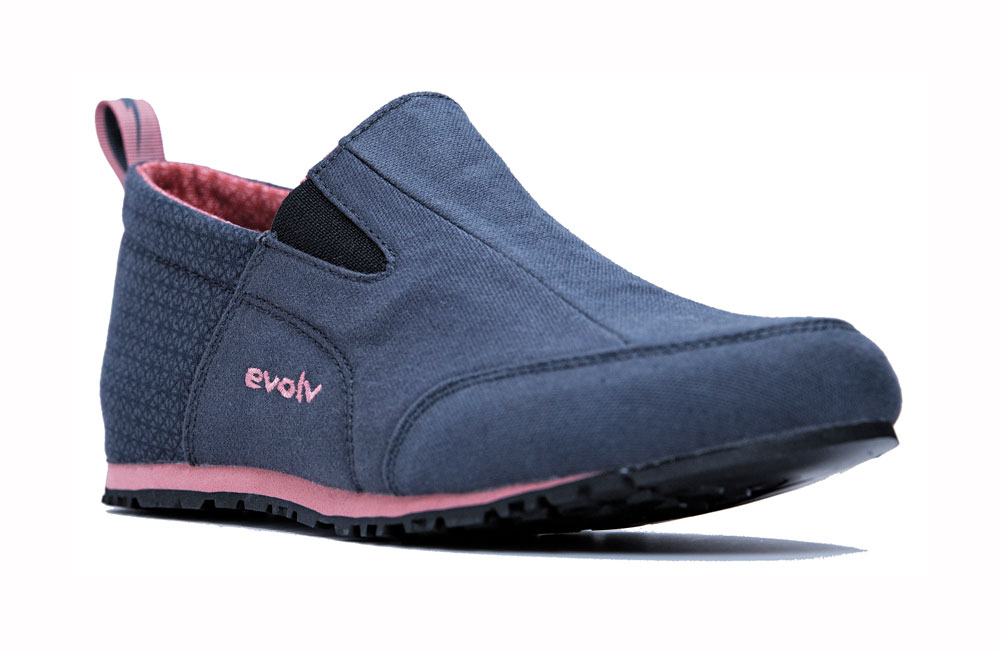 With sticky rubber on the outsole, the Cruzer Slip-On is solid on rocky descents or approaches or for rock hopping around a boulder area.

On-off, on-off. So it goes with climbing shoes at a bouldering or sport area, as you move among the blocks or from route to route. Friends of mine, sick of all that lacing, often arrive at our local area of Rifle carrying flip flops: Flippies are quick to put on and will air out your feet, but with them dirt gets on your feet and into your climbing shoes. Moreover, flip flops hamper mobile, reactive belaying. In fact, one top climber who frequents Rifle won’t let people belay him in flip flops.

The Evolv Cruzer Slip-On, a slide-in approach shoe that came out in a women’s version in 2016, is a panacea. Descended from the Classic Cruzer of three years ago and the most minimalist in the line, this version slips on and off, no laces. (The lace-up Psyche, which I did not test, was also new in 2016.) If you’re just down from a route and your skin is dampish, you can hook a carabiner through the heel loop to help pull the shoe on, but the heel also flattens, so you can scuff your foot in.

The Slip-On is handy at roadside sport crags like Rifle, Colorado, but to me really shone at cliffs such as Monitor Rock, also in Colorado, with multipitch routes and a walkoff. At only 6 ounces for a women’s size 7, it is perfect for folding into a small pack or clipping straight to your harness, and then wearing to scramble down. With sticky rubber on the outsole, the Cruzer Slip-On is solid on rocky descents or approaches or for rock hopping around a boulder area.

I use the Cruzer Slip-On for approaches of up to 20 minutes or 25 minutes, in part because it’s easier not to wear wear socks with a slip-on shoe, at least for short periods, and the canvas liner is intended to let you go sockless. My only issue with the Slip-On is its lack of arch support; I like arch support in any approach shoe, minimalist or not.

Overall, you get a lot of utility for your $69. The Cruzer Slip-Ons are a good crossover for crag wear, travel or going out and about in an urban environment. They are like TOMS or Sanuks—with sticky rubber.