Developed by climbers Tom Randall and Ransom Allison, these brushes are crafted especially for climbing. One version sports nylon bristles, while the other has natural boar’s hair. Both are four times larger than a toothbrush and heavy duty—guaranteed not to break or have the bristles fall out. 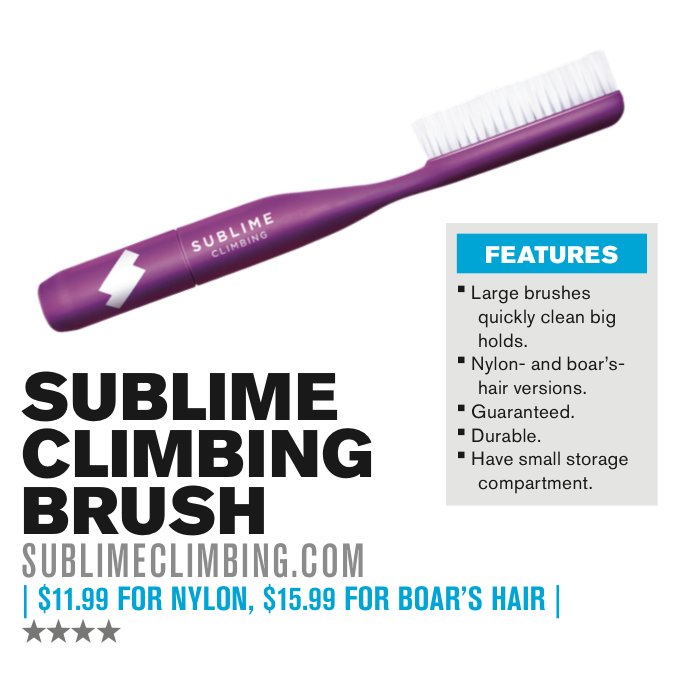 My brush collection would make a chimney sweep blush. I’ve got a regular broom, a short-handled broom, a nylon whisk brush (with dust pan!), wire brushes of various sizes, toothbrushes, a round bottle brush for getting inside cracks, a grout brush, a push broom with nylon and metal heads, and for heavy work, a powered roto brush with multiple nylon attachments.

That arsenal might seem like enough, but as they say, “Chalk never sleeps,” so I was psyched to try the new Sublime Climbing Brush. Developed by climbers Tom Randall and Ransom Allison, these brushes are crafted especially for climbing. One version sports nylon bristles, while the other has natural boar’s hair. Both are four times larger than a toothbrush and heavy duty—guaranteed not to break or have the bristles fall out. The brushes’ large business area and copious bristles—“ Six times the bristle count of any other brush,” says Randall—makes quick work of chalk build-ups and other gunk and gack that could spoil your send.

I especially liked the boar’s hair. These fine fibers do an A+ job of removing chalk and restoring the rock’s texture to optimal grippage. The nylon version, meanwhile, was my go-to for attacking dirt and grit. In my ideal world I hit a hold with the nylon brush, then gave it a few licks with the boar’s hair to fine tune it.

Because the Sublime brushes are larger than a toothbrush, they don’t fit in a chalkbag’s brush holder. This is a drag because you have to thread a cord through the hole in the handle, and clip the brush to your harness or chalkbag belt. Another downside of size: The Sublime rigs are too fat for smaller pockets and inset holds, so you’ll still need a toothbrush.

The end of the handle unscrews to reveal a hollowed-out “secret compartment,” although it’s hardly a secret if everyone knows about it, right? Whatever you call it, the storage space can hold a small tube of skin cream or a handful of ibuprofen or a roll of beer money.

A regular toothbrush is about a buck, while the Sublime brushes are 12 to 16 times more. Are they worth it?

The Sublime Climbing Brushes aren’t toothbrushes, so a comparison isn’t apt. The Sublime brushes are scrubbers and aren’t dainty little things—they are well built and durable. They last. And that makes them first in my arsenal.