Gunks Apps, a company in the emerging digital guidebook landscape, has been gradually expanding to cover more areas than its namesake.

If you’re a rock climber based in the Northeast of the United States, Gunks Apps is a new viable alternative to paper guidebooks or to Rakkup and Mountain Project for smartphone users. Although crowdsourced apps like Mountain Project are often highly useful, they can be rendered useless if you’re without cell phone service or forgot to download a destination’s map. It can also be problematic if the climb you’re looking for doesn’t have enough details or hasn’t been posted. While Rakkup and Gunks Apps share many similarities, the former platform also does not include many of the destinations currently offered by Gunks Apps.

Gunks Apps is named after (surprise, surprise!)  “The Gunks,” the nickname of the world-famous Shawangunks in the mid-Hudson region of upstate New York. Over the past few years, Gunks Apps has grown to cover many climbing destinations across the Northeast and has recently started expanding into other geographic regions, too.

I first used Gunks Apps at an outdoor bouldering competition, Gunks Boulder Bop. The contest was in Peter’s Kill, a section of Minnewaska State Park in the Shawangunk Mountains. As part of the competition entry fee, everyone received a free Gunks Apps bouldering guide for the area.

Upon opening the app, climbers found an overview map, linked at the top of the list of climbs in the guide. This detailed trail map labeled all the bouldering areas, indicated their location off particular trails, and included orientations to other boulders and landmarks. This map made it easy for climbers to determine where they were in relation to boulder problems they wanted to climb.

This is an image of the area trail map. 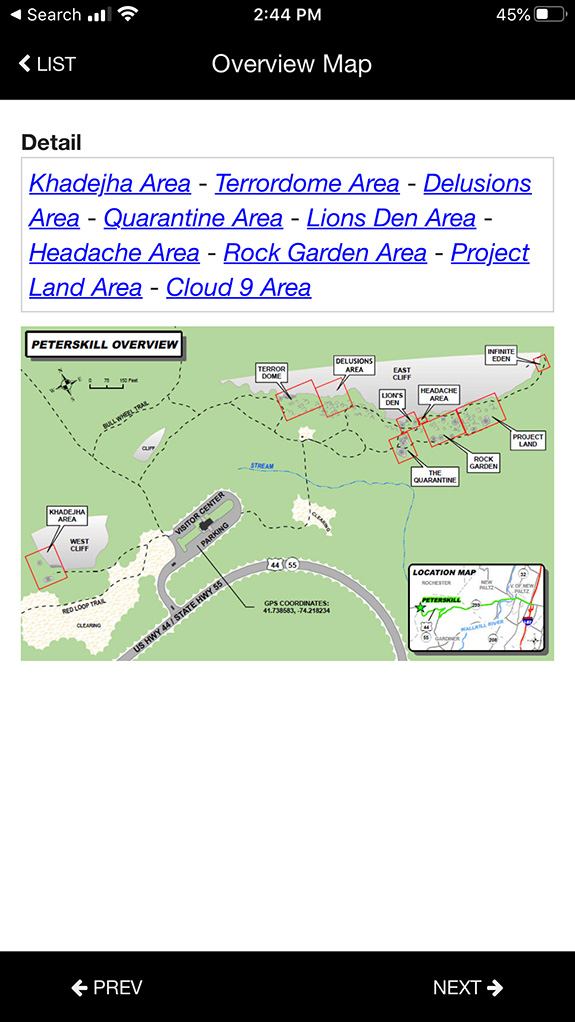 From the trail-map page, every specific bouldering area contains a link to a more detailed map. When tapped, this link takes users directly to a map of each section, including a numbered list of all the bouldering problems (or sport climbs or trad climbs) in that location.

Additionally, from either the bouldering area’s page or a particular boulder problem’s page, climbers can click the navigate button to guide them to a climbing area or a specific climbing problem. This feature tells users the direction they need to head, such as north, along with how many meters they need to travel until they reach their destination.

Below is a detailed image of a specific bouldering area that was linked to the overview map. 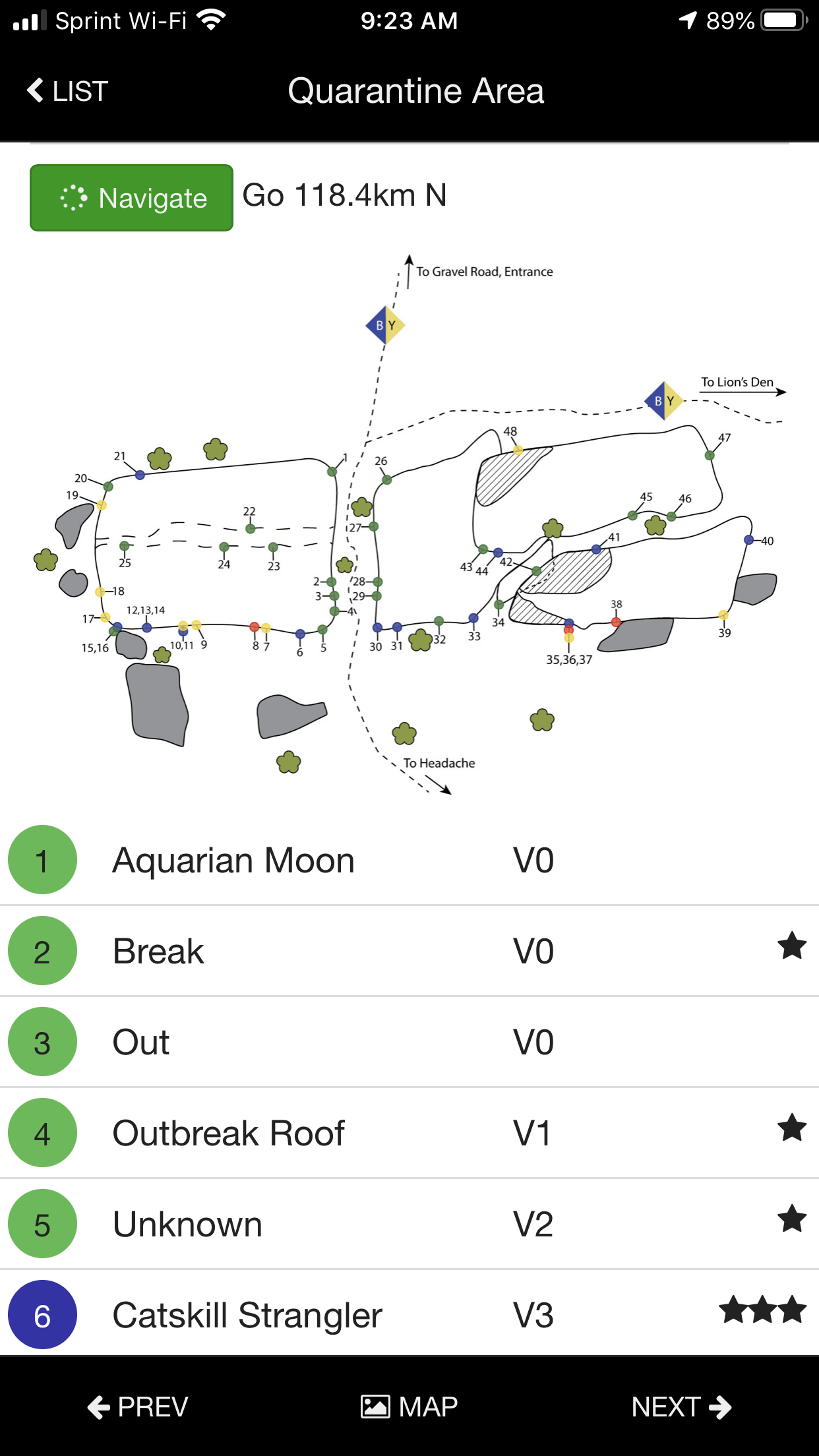 The list of climbs for each climbing area also conveniently displays a star rating (indicating the quality of the line), the grade of the problem and color-coding corresponding to the grade. The color-coding in all of the Gunks Apps bouldering guides works as follows: green is V0 to V2, blue is V3 to V5, yellow is V6 to V9, red is V10 and up, and black indicates ungraded projects. The color, grade and star-rating details also appear on each route’s page, where each problem has a description.

The grade and star ratings also double as a filtering mechanism that can be used to find climbs. These filters are offered in all the guidebooks available in the app, making for a consistent and intuitive user experience. Finally, the app provides a great search mechanism where climbers can type in the name of a climb or climbing area and go directly to its page.

Here is the filtering mechanism within the guide; the search bar is also visible in the bottom right. 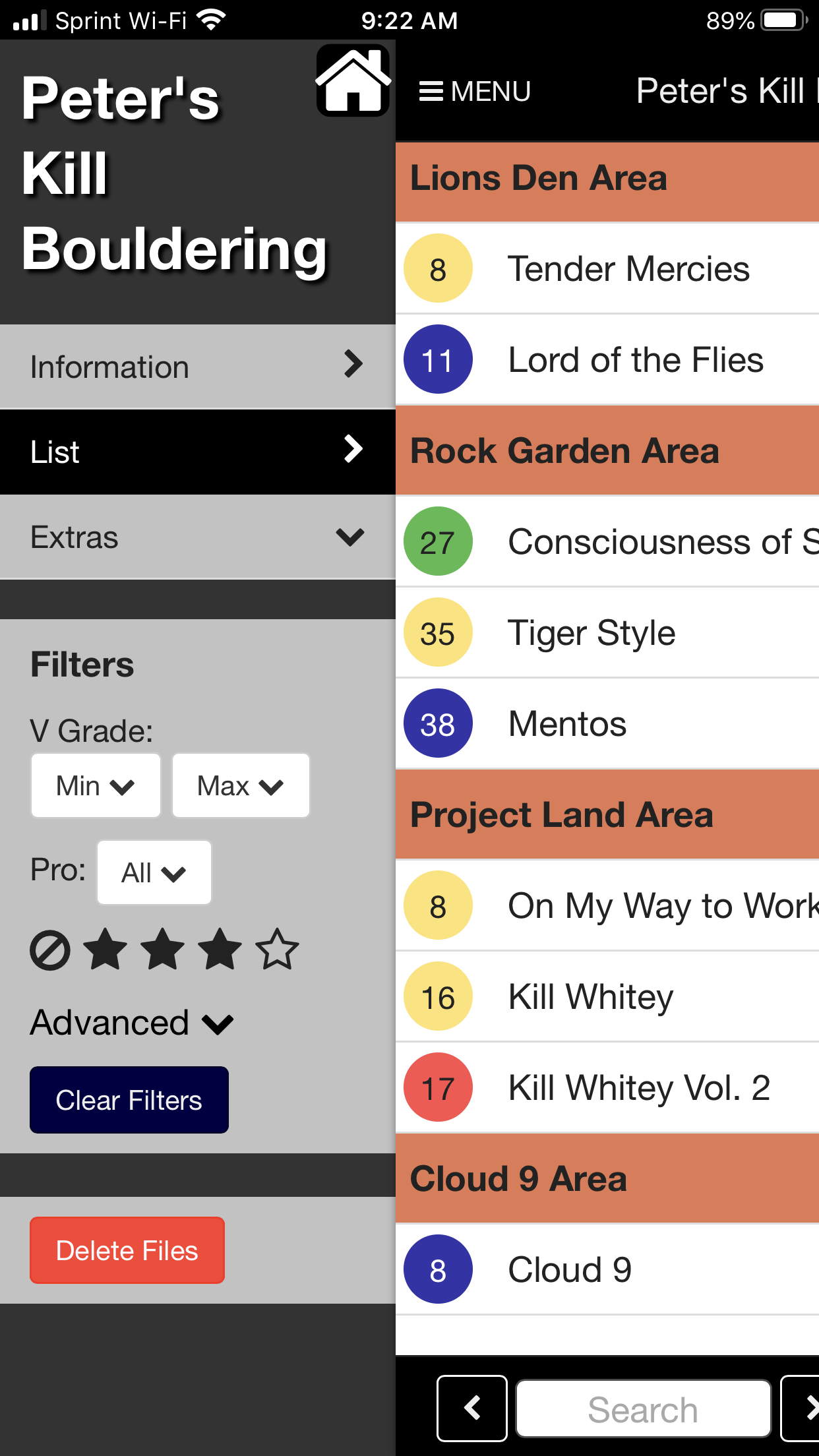 After the competition, I purchased the Gunks Apps trad and top-roping guide for Peter’s Kill. Most of the features in the bouldering guide function nearly identically in the trad, top-roping and sport guides. For instance, the only difference in filtering for roped climbs by grade is that the app shifts from the V-Scale to the Yosemite Decimal System. In comparison, the filtering stars and search tools behave the same. As expected, additional necessary details are reflected in the trad and sport climbing guides, such as protection ratings, locations of bolted anchors, pitch by pitch descriptions, and rappels.

Since my first day using it, Gunks Apps has been my go-to guide for climbing in the Gunks, too. I’ve never bothered with a paper guide, although there will always be immense value in traditional paper guides for climbing areas. For instance, there’s simply no replacement for Dick Williams’s quintessential guide, The Climber’s Guide To The Shawangunks: The Trapps, which contains a detailed history section on the renowned climbing destination. The guide also has stunning imagery from the location’s lengthy climbing history that dates back over eighty years.

In contrast, historical information is not the strength of Gunk Apps. However, the guide they offer for the Trapps contains some first ascent details and more than enough information for anyone to climb in the area.

Another noteworthy limitation is that Gunks Apps does not have a traditional website where users can view their guides on a laptop or desktop computer. So if you don’t have a smartphone, you cannot access any of their guides.

Regardless, the app does provide a viable alternative to paper guides and isn’t limited to climbing in the Gunks. The platform also provides guides across the northeast for the renowned sport climbing of Rumney National Park and the acclaimed bouldering of Pawtuckaway National Forest. Another hidden gem they have is a guidebook for New York City. If you happen to be passing through or live in the city, this guide can be used to explore its often sandbagged bouldering. Many of the city’s classic lines are easily accessible in Central Park.

Gunks Apps have also expanded beyond the Northeast. They’ve recently grown to include iconic destinations such as Joshua Tree National Park in California, and developing areas such as the rugged oceanside sport climbing on the island of Cayman Brac located in the Caribbean sea. What’s more, over the last few months, they’ve added a bouldering guide for Long Island, New York, and a top-roping and trad climbing guide for the central New York town of Little Falls. At the time of this writing, they offer thirty guides with the majority located in the northeast. The recent additions show how the growing app provides another way to get detailed information on some unheard-of and, consequently, lesser documented climbing areas. While it also offers alternative guides for many well-known destinations.

Additionally, everything I’ve learned about the founders of Gunks Apps through their social media presence has bolstered my decision to support their guides. During the COVID-19 pandemic, I’ve seen them advocate for responsible climbing habits and post details on closures and re-openings for certain climbing areas.

Also, the creators decided to rename specific routes that might be considered offensive to particular groups. In an Instagram post, they stated, “After receiving a great deal of feedback from a diverse and wide audience of Gunks climbers, the overwhelming consensus was that Shockley’s [Ceiling] should be renamed.” They decided to change the name of the classic route, Shockley’s Ceiling, to The Ceiling, demonstrating a strong sense of social responsibility. William Shockley, the route’s first ascentionist, recorded many scientific achievements in electrical engineering, he was also a known proponent of eugenics. Eugenics is a set of beliefs and practices aimed at improving the genetic quality of the human population, historically by excluding people and groups judged to be inferior, and promoting those judged to be superior. The concept of eugenics is closely tied to scientific racism and white supremacy—removing Shockley’s name from the route was the right decision.

The creators’ social consciousness and sense of care for climbing areas in the Northeast are the final sticking points that make me proud to support these independent guidebooks. Their principles and positive influence also inspired me to share my experience with the broader climbing community. So whether you decide to explore a guide they offer on an upcoming trip, or if one of their guides bails you out when you leave a paper guidebook behind, Gunk Apps is a reliable and responsible new way to explore climbing areas.

Garrett Lubniewski is a freelance writer and software product manager based in New York City. He spends his time pulling plastic at local gyms, bouldering in Central Park, and climbing in the Gunks whenever he’s able to get outside of the city. See more of his work at garrettlubniewski.com/.

Climb-On Maps: A New Navigation And Planning Resource For Climbers