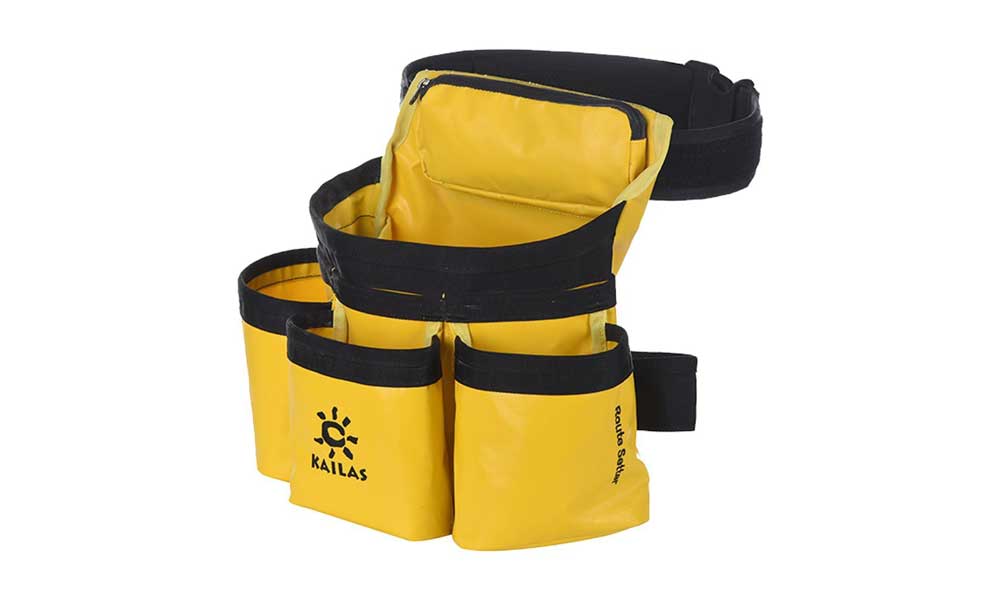 Miryam Nissan is a route setter at Movement Baker, and she put the Kailas route setter tool belt—appropriately called the Tool Bag—through the paces.

For most route setters, tool belts are a must. Setters have an overabundance of things—hardware, safety gear, holds, gum, Clif Bar wrappers and other odds and ends—all of which need to be accessible after having climbed a ladder or while dangling 50 feet up.

If you’ve seen a route setter, or are one yourself, you are familiar with the Husky tool belt—made for construction workers, electricians and other various handymen—-that bounces on almost every setter’s hips. Being a setter myself, and one that’s on the smaller side, my boss had to cut and MacGyver my Husky belt to fit me. With climbing’s recent inclusion in the Olympics and consequent surge in popularity, several climbing-endemic brands have started producing their own tool belts. Being less than thrilled with my still slightly-too-large Husky belt, I jumped at the chance to test out Kailas’ version.

I’ve been using the Kailas Tool Bag for two months or so, and although obtrusively yellow (if you know me you know I wear all black always), it is a nicely designed piece of equipment. So far, it has proven durable and equally useful for setting both routes and boulders.

The Kailas Tool Bag is made from a yellow PVC-type laminated fabric with mesh, and it has a Velcro belt that is easily adjustable and comfortable. I certainly didn’t have to perform surgery on this tool belt to get it to fit me. This belt can cinch down to fit my 24-inch waist no problem, but could easily accommodate those with waistlines smaller or considerably larger.

This route setter tool belt has three smaller pockets, one big pocket and even a cellphone pocket. The latter was pointed out to me by my boss when he saw I was not utilizing this.

[Also Read How To Build Your First Trad Rack]

“All the USAC Route setters put their cell phones in that pocket,” he said. I didn’t believe him at first.

“You’ll see, it’ll fit right in there,” he added. And it sure did. If you want to listen to music while you set (a little melodic inspiration never hurts) this pocket is nice touch (though you’ll have to listen with wireless headphones, otherwise your phone won’t fit).

If you don’t use that pocket for your phone, it’s still quite useful. It has a little magnetic strip, which I use to keep screws and drill bits right where I want them.

I like the Tool Bag’s pocket system because I have plenty of options as to how I want to organize my drill bits, bolts, screws, and chewing gum. I usually throw my smaller items, like drill bits and bolts, into the smaller pockets, and bigger items like safety glasses, gloves and chalk balls into the big pocket. This way I’m not endlessly searching for the microscopic items that get lost in the larger pockets of other tool belts.

Another big plus for me is that I can fit climbing holds into the big pocket. This really helps when I’m setting the cave at Movement Baker and don’t want to keep going up and down for foot holds. On some occasions I’ll even put my drill into that big ol’ pocket, although I wish that there was a better drill holster or something else of the sort to hold that ever-so-important and fundamental route-setting tool.

All around, the Kailas Tool Bag is easy to use, comfortable and versatile. Although there are cheaper options out there, $60 is a fair price for the size and variety you get with this tool belt. My only other complaint is that it doesn’t come in black. I’ll be waiting for that.

Miryam Nissan has a Bachelor of Fine Arts in Printmaking, and is a routesetter at Movement Climbing + Fitness. When she’s not setting, she’s a rock star with her band Nightmare Blue.