How to Choose a Climbing Rope - Rock and Ice 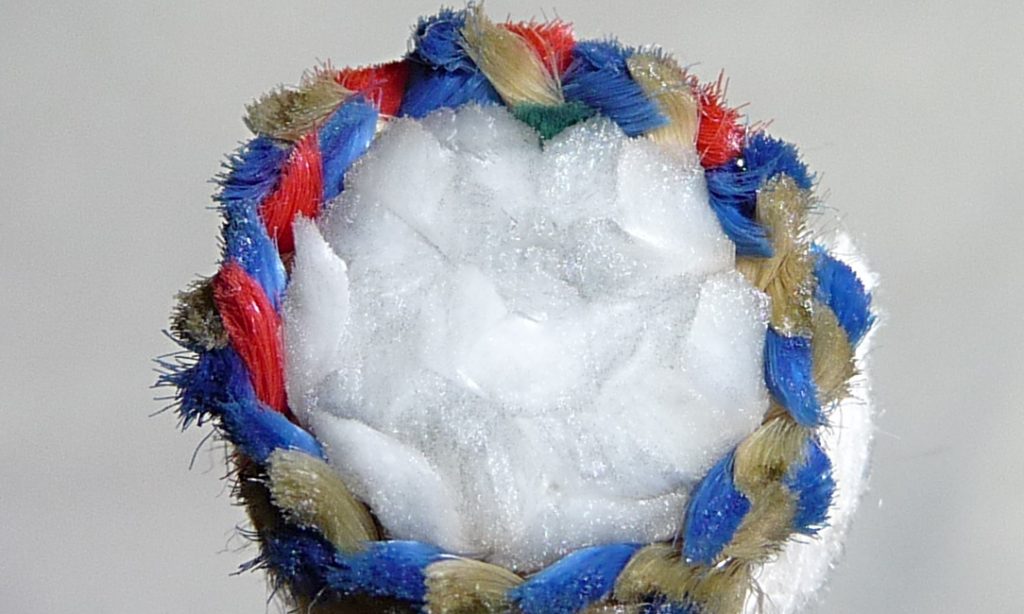 How to Choose a Climbing Rope

Ropes, like runway models, seem to be getting skinnier with each passing year. Not that long ago, almost all lead ropes were 11mm. Now, you only see the fatties in heavy-duty situations such as on big walls and fixing; 9.8mm lead ropes are standard; low-9mm single ropes are common; some companies even have single ropes in the 8-millimeter range now. Similarly, double and twin ropes have also gone on diets.

We can thank ultra-modern weaving technologies and improvements in materials for the skinnier ropes, but the svelte cords also have thinner sheaths. Since the bulk of a rope’s strength resides in the core, slimming down the sheath makes a rope smaller without seriously compromising strength. But shaving down the sheath also makes a rope less durable.

Choosing a rope diameter is always a balancing act. Do you want durability or light weight? Most climbers will want a single rope in the middle to upper 9-millimeter range for everyday use, and reserve the smaller crowd for redpoint burns, hard onsight attempts and fast-and-light alpine ascents where every gram of weight counts. Note that not all rope diameters work well with all belay and rappel devices. Skinny ropes are more difficult to grip and make for faster, hotter rappels and lowers than fatter ropes.

Fifty-meter ropes used to be standard. Accordingly, many anchor stations in sport areas were established so you could lower off at the 25-meter mark. Then, along came 60-meter ropes, and the anchors moved higher. Now, 70-meter ropes are quite common, and anchors on the newest routes can be set at 30 to 35 meters. Even 80-meter ropes are getting used, and are quickly becoming standard issue for route development in Europe.

The dangers of starting up a route and using a rope that is too short for it are many. For one, you may not be able to reach the anchors. For another, your belayer might accidentally lower you off the end of the rope. Always confirm a route’s length and match your rope to suit it. Also, knot the end of the rope!

A skinny rope is usually a lightweight rope, but not always. A skinny rope with a tight, dense weave can in fact be heavier than a fatter cord with a looser weave. The real measure of rope is its weight per meter, listed in grams. Use this number to calculate a rope’s overall weight.

Single Ropes are usually 9.0 to 11mm (but there are a number of options in the 8-millimeter range these days) and are intended to be used as single strands, clipped to every piece of protection. Single ropes, designated on the rope ends by the mark of a number “1” inside a circle, are the most utilitarian and common. 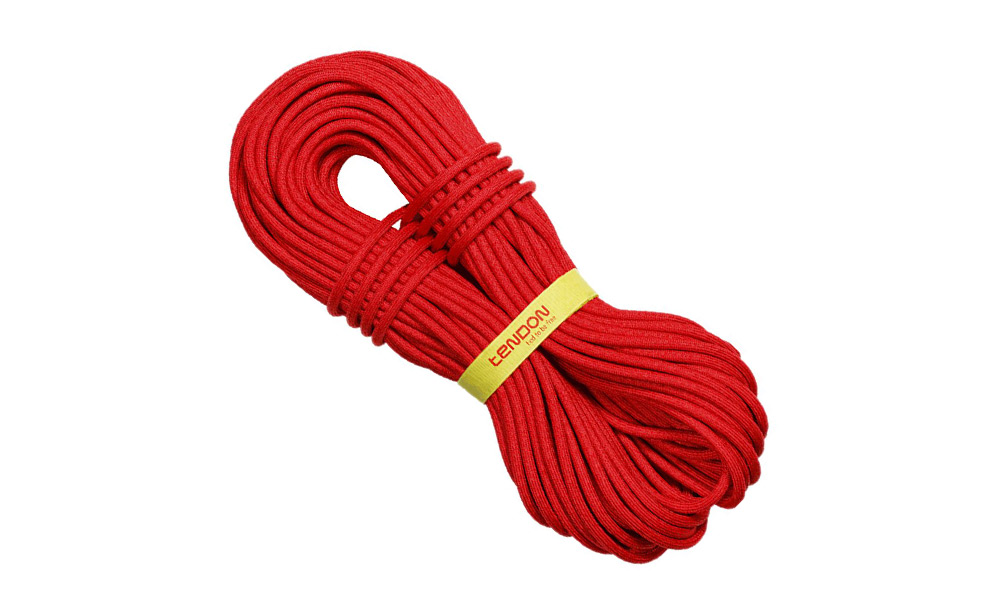 The Tendon Master Pro 9.2 is a great single rope at a competitive price point. “The handling of the Master Pro is pure class, due largely to Tendon’s Simple Braid System (SBS), which decreases the overall friction of the sheath,” wrote our reviewer. Read out full review of the The Tendon Master Pro .

Double Ropes (or “half” ropes), designated with a “½” inside a circle, must be paired together—never use a double rope as a single rope—and clipped alternately through your protection. Double ropes are popular for ice and alpine routes, where you typically need two ropes for the descent. Most double ropes are in the 8- to 9mm range. Some double ropes are also designated as twin ropes, and some twin ropes are likewise approved for double use.

Twin Ropes are typically the thinnest and lightest of all, as trim as 7.5mm. Because they are so thin, twin ropes, marked with a sideways 8 inside a circle, are to be used as a unit, with both ropes clipped together to every piece of protection. Do not make the common mistake of confusing double ropes with twin ropes.

A few ropes are certified for all uses, single, double and twin. Check the tag. 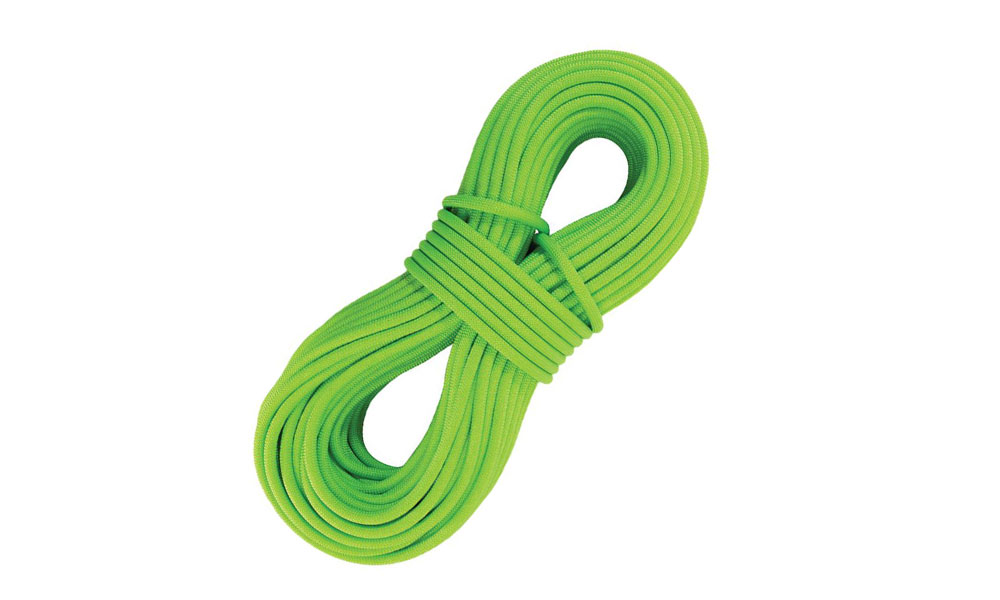 The Sterling Fusion Nano IX 9mm is one of the more advanced light ropes out there, and is rated for single, double and twin use. Our reviewer wrote, “For sport climbing, the thinner diameter of course makes it harder to boing up after you fall—but for everything else, such as sending or the circuit day, the Nano’s light weight, low drag and ease of clipping pay dividends.” Read out full review of the Sterling Fusion Nano IX 9mm.

For a rope to earn its “CE” approval, it must withstand a series of test falls that are designed as worst-case scenarios. In real life it is virtually impossible to duplicate a fall as severe. A certified single or double rope must survive five such falls; and a twin rope must hold 12 falls. The chart notes the total number of falls, as supplied by the manufacturer. While a rope that holds more falls can be superior to a rope that holds fewer, the fall rating is only part of the equation. Equally important are elongation and maximum impact force (see below). The ideal rope holds a high number of falls, stretches little and has a low-impact force.

Dry treatments do more than just repel water. They also lubricate the rope fibers. A slippery rope is more durable, has less drag and is easier to handle. Lowering the friction among the rope fibers also helps distribute the force of a fall along the rope’s length, making it stronger than a rope where the load is more concentrated. Perhaps more important, recent test indicate that a coating can offer some protection from harmful chemicals, such as sulfuric acid from car batteries.

A rope is essentially a long shock absorber. The more shock a rope can absorb, the lower the strain that rope puts on your protection. A rope’s ability to absorb energy is relative to its maximum impact force. Pay attention to this, more than any other number. You want a low impact force—and low stretch.

Ropes stretch to absorb force. The amount of stretch is measured statically and dynamically. Static stretch, such as that created when you simply dangle on the rope, is important to know for jumaring and rappelling, where you want a rope with little static stretch. Dynamic elongation, along with falls held and maximum impact force, is a critical stat. It shows how much a rope stretches to absorb energy. More stretch usually means greater energy absorption and a lower maximum impact force, but also means that you’ll fall farther, possibly hitting a ledge or the ground. This is, however, not always true—it is possible to have a low-impact force rating and low dynamic elongation. Check the stats and compare.