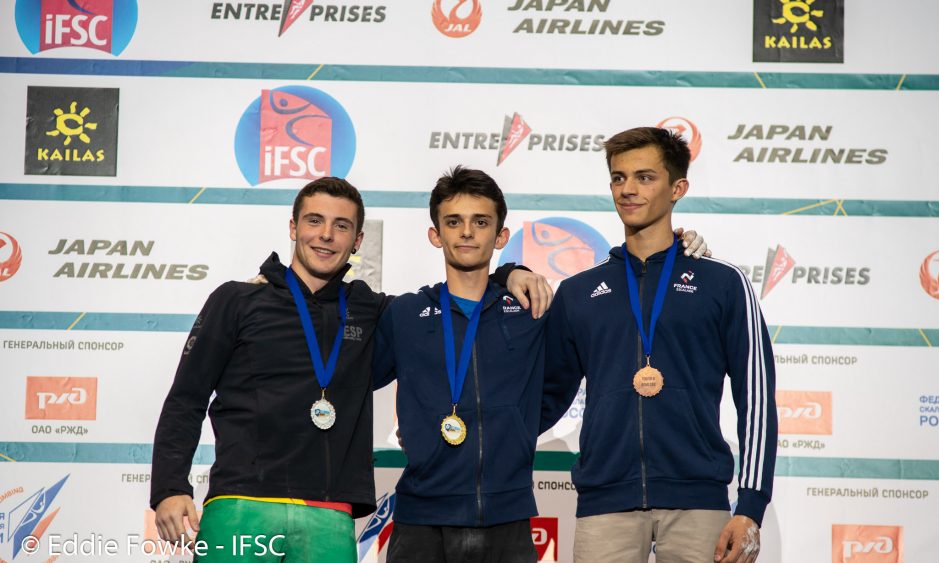 The Youth World Climbing Championship in Moscow, Russia, is in full swing, and winners have already been determined for Youth A (ages 16-17) and Juniors (18-19) bouldering, as well as Juniors, Youth A and Youth B (14-15) speed. The Italian Laura Rogora took the Youth A bouldering crown for the girls, while French climber Sam Avezou was crowned champion of Youth A bouldering for the boys. Junior boys champion for bouldering was Meichi Narasaki of Japan, and for the girls, Hannah Slaney of Great Britain. Gian Luca Zodda and Ekaterina Barashchuk, from Italy and Russia, respectively, have been awarded the title of Junior Speed World Champions. Almaz Nagaev of Russia and Haram Jeon of Korea were crowned Youth A and B boys speed champions, and Natalia Kalucka of Poland and Jimin Jeong of Korea were crowned champions for the Youth A and B girls.

Rogora went into Youth A bouldering finals alongside two Japanese, Futaba Ito and Saki Kikuchi, as well as Lucka Rakovec of Slovenia, Frederike Fell of Germany, and the American Brooke Raboutou. F1 saw Rogora come out strong with a flash, while Kikuchi and Rokovec each managed a top after four tries. F2 and F3 battered all competitors back, and thus it all came down to F4. Here Rogora made another stunning flash, making her the only finalist to top two problems and clinching her the top of the podium. Ito’s last minute top after her fifth try, which along with her zone points on every problem, gave her a place on the podium in third. Rakovec’s zone, along with her top of F1, placed her in second.

The boys finals for Youth A was much more closely contested, with five out of the six finalists, Avezou and Nathan Martin of France, Eneko Carretero Cruz and Alberto Gines Lopez of Spain and Zach Richardson of Canada, all flashing the first problem. M2 saw Avezou and Carretero Cruz blasting up the slab through a crimpy crux for a flash. Martin and Konishi Katsura of Japan also managed tops. On M3 Avezou and Carretero stayed on top with another flash each. The final problem saw both leaders fall initially, but when both managed a top in two attempts, the championship went to Avezou on countback to semis. Martin slotted in for third with flashes on M1, M2 and M4 (M2 took the Frenchman two tries for zone, then top).

Juniors bouldering finals for the boys saw Meichi Narasaki of Japan duke it out with the German Yannick Flohe, taking the championship with a stunning blitz of the final problem, despite a 10-try effort for zone and top on M2. Slaney narrowly won the girls Juniors bouldering, edging out the Slovenians Urska Repusic and Vita Lukan with two flashes and three tops.

In girsl Juniors speed, Barashchuk battled her Russian teammate Elizaveta Ivanova, narrowly winning 8.12 to 8.16. Zoda edged out Noah Bratschi by a larger margin, 7.69 to 9.29, winning for the males. Youth A boys speed saw Nagaev take a second speed win for Russia, after a fall by the American Jordan Fishman and a finishing time of 6.66. Kalucka barely stopped the Russians from taking a third championship, with a time of 8.38 to the 8.44 of Kamilla Kushaeva. In Youth B, Italy and Korea faced off in both the girls and boys finals, with Korea winning on both accounts. Jeon took down Andrea Zappini, and Jeong took down Anna Calanca. -Owen Clarke

All photos of the Youth World Championships are provided by photographer Eddie Fowke. To support Fowke and ensure he can continue to provide coverage of these events please consider donating to his GoFundMe campaign here.