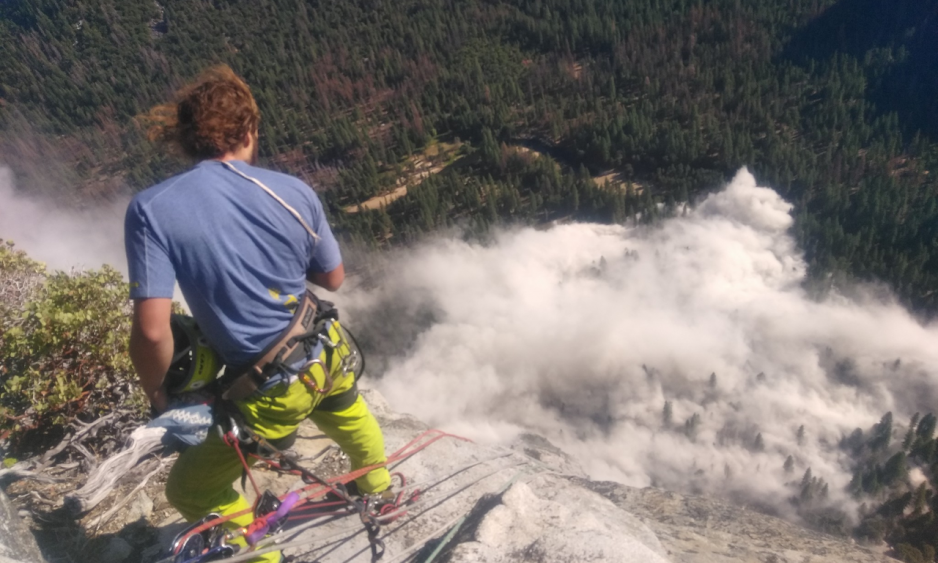 Looking down on the plume of dust and debris following rockfall off of El Capitan in September 2017. Photo: Pete Zabrok

There were many large and consequential rockfalls in Yosemite in 2017, with a record 85 events (including rockfalls, rockslides and debris flows) documented. The cumulative volume of these events was about 36,800 cubic meters. Although this is not the largest annual volume recorded, greater volumes in previous years were typically dominated by one very large event (for example, the 46,700 cubic meter rockfall from Ahwiyah Point in 2009), whereas the cumulative volume for 2017 resulted from several large- and medium-sized rockfalls.

The largest event in 2017 almost escaped notice. On the stormy morning of January 12, road crews encountered downed trees and a damaged manhole on the road between Pohono Bridge and the Big Oak Flat Road junction. They also noticed a suspiciously fresh-looking boulder in the Merced River. Subsequent investigation revealed that the boulder was part of a very large rockslide that originated far above the road in an area known (appropriately) as “The Rockslides.” The total volume of this slide was about 20,000 cubic meters (almost 60,000 tons), most of which was scattered throughout the forested slopes above the road. If not for the single boulder that hit the road, this rockslide might have escaped notice for some time.

Much greater road damage occurred on June 12, when about 650 cubic meters (nearly 2,000 tons) of rock fell from “Parkline Slab,” a sloping cliff just east of the park boundary near El Portal. About one-third of the rock debris landed on the El Portal Road, burying a 60-meter-long (200 feet) section of road under tons of rock; fortunately, there were no cars directly under this area, despite the rockfall occurring around noon during the busy summer season. The road was closed for five days as crews cleared debris and repaired the roadbed. Much loose debris remains on the slope above the road, and could continue to slide during intense rainstorms.

The year’s most consequential rockfalls occurred from the southeast face of El Capitan in September. The first of these occurred at 1:52 pm on September 27, when 290 cubic meters (860 tons) of rock fell from the cliff near the path of Horsetail Fall. Two rock climbers were walking along the base of the cliff directly under the area, and, sadly, one of them was killed and the other seriously injured. YOSAR quickly extracted both climbers, as several more rockfalls totaling 163 cubic meters (440 tons) pummeled the base of the cliff over the next few hours. At 3:21 pm the following day (September 28), a much larger rockfall originated from the same location. This rockfall, totaling 10,324 cubic meters (27,875 tons), buried trees at the base of the cliff and generated a huge dust cloud that fanned out across the valley. A small rock fragment hit a vehicle traveling on Northside Drive, puncturing the sunroof and injuring the driver. Northside Drive was closed for 24 hours as geologists assessed the potential for additional activity. Several smaller rockfalls occurred from this same area in October and November.

It is very likely that there were additional rockfalls and rockslides in 2017, but these events either were not witnessed or went unreported. If you witness a rockfall of any size, encounter fresh rock debris, or hear cracking or popping sounds emanating from the cliffs, please contact park geologist Greg Stock at greg_stock[at]nps.gov, or contact Park Dispatch by dialing 911 within the park. Documented rockfalls are added to the park database (http://pubs.usgs.gov/ds/746/), enabling long-term evaluation of rockfall activity to improve public safety.

Republished from nps.gov with the permission of author Greg Stock.