While making the second ascent of the difficult aid climb, Zabrok—who barely escaped scot-free from the massive rockfall on El Capitan in 2017—noticed what he thinks are signs that the Big Stone is ready to slough off another huge hunk of rock. 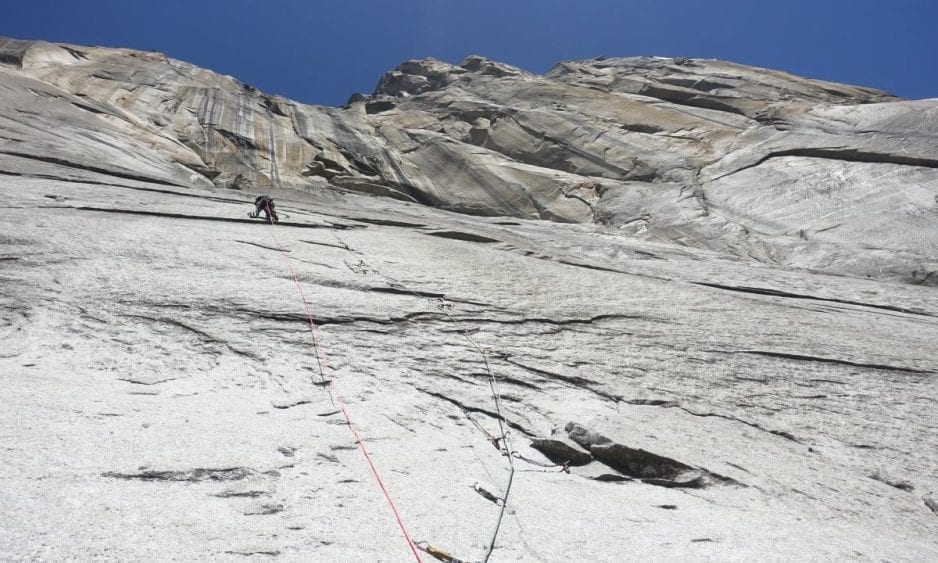 Erik Eriksson on the granite wilderness of the Great Slab, El Capitan, on the second ascent of Winds of Change. Photo: Peter Zabrok.

With a combined age of 122, “Pass the Pitons” Pete Zabrok—59 and a longtime Rock and Ice columnist—and Erik Eriksson—63 and one of the original Stonemasters—have learned a thing or two in their Yosemite days. Each has climbed his age in unique El Cap routes, an accomplishment far more impressive for sexagenarians than the twenty-somethings scampering up Freerider.

Early last month, Zabrok’s total number of unique Big Stone routes stood at 60, Eriksson’s at 62 or 63—“Erik is so old, he can’t remember the exact number,” Zabrok quipped in a phone call from the Valley—but now, as they reliably have year by year, those totals have risen again. Along with a younger British expat Neil Chelton, Zabrok and Eriksson made the true second ascent of the bold aid-line Winds of Change (VI 5.10 A5), topping out September 29. While they had a “blast” on the wall, it also happened to be one of the diciest voyages up El Capitan that any of the three has had in their days…

Winds is a Richard Jensen creation from 1991 and sits just to the left of his more infamous and contentious line, Wings of Steel (VI 5.10+ A4+). Jensen opened Wings along with Mark Smith in 1982. The route was the source of much controversy and squabbling about aid style and ethics over the years, until El Cap’s resident pirate, Ammon McNeely, willed himself to a second ascent in 2011 and confirmed its quality and seriousness. Winds has an equally esoteric and intimidating name as Wings, its grades are just as menacing and its first ascent history is epic in its own right (Jensen spent 32 days on the wall). Nonetheless, it remained a far less divisive route.

Winds of Change received at least one good-faith second ascent attempt by an the Italian climber Valerio Fulco, solo, but did not yield. In 1996, two Slovenians, Grega Lajen and Iztok Mihev, made what their countryman Franci Savanc described in the American Alpine Journal as a “convoluted second ascent.” The pair fixed ropes on the first six pitches, rested for three days, started up the wall, and then retreated at the tenth pitch when they realized their haulbags had ripped open and spilled their water on the bay trees and talus below. Savanc wrote, “They [rappelled] to the ground, rested, then hiked to the top of El Cap. They [rappelled] down to the 10th belay and climbed the upper part of the route in one 20-hour push.” While they climbed all the pitches, a proper second ascent was still up for grabs.

Zabrok has gradually exhausted his options for moderate routes via which to climb El Cap. “I’m running out of easy routes buddy!” he lamented on the phone. While he felt Wings to be above his pay grade (at least consequence-wise), with the strong Eriksson and Chelton in tow, he decided Winds of Change fit the bill this season.

After the first pitch, a 5.9 called Captain Hook, Winds climbs the Great Slab to the left of Wings of Steel. That second pitch is the crux of the climb. Chelton drew the lead and spent two days finishing it, spending the night on the ground in between. Chelton described the pitch as “trouser-filling,” according to a chuckling Zabrok.

Zabrok took the sharp end on pitch four, and found A4 heading, with some enhanced hook placements. “What I found were more full-on drilled bathooks” than the dimpled hook placements that Richard Jensen had told him about in an email, he said. “If Richard says he dimpled the hook placements, he probably did—he’s very credible, and he says he knows he didn’t over-drill them because some of his placements blew out on him.” But Zabrok insisted that the holes were more than dimpled, and speculated that they may have been enhanced by some party in the intervening years. He added, “Valerio says he didn’t further enhance the holes, and I believe him.” Regardless, Zabrok found the climbing to be “pretty hard and quite runout.”

With the crux pitch already well below them and slightly less heads-up hooking than anticipated, the team figured it would be straightforward climbing to the top. But things got “spooky and crazy” about two-thirds of the way up the Great Slab.

Below a feature called the Pinnacle of Hammerdom, the team was “showered with a fine sand for about a minute or two,” Zabrok said. He wouldn’t have thought much of it, except that precisely the same thing happened to him, Ryan Sheridan and Patrick McRedmond on Waterfall Route (VI 5.10 A4) on the exact same day a year ago—September 27, 2017 . That turned out to be a precursor to  the massive “100-foot by 100-foot chunk of granite the size of an apartment building,” as Zabrok described it, that fell from El Cap the same day and killed a person on the ground. Zabrok and his partners narrowly missed riding that chunk down to the ground, having only just climbed above it before it detached.

Fearing the sand dribbling down from Hammerdom was a harbinger of similar rockfall, Zabrok said to Eriksson and Chelton, “Guys, we need to get the fuck out of here ’cause we’re gonna die.” The team kicked it into overdrive to get above it as quickly as possible.

Eriksson led a fist crack around the left side of the Pinnacle the next morning. As Zabrok followed the pitch he wondered why Eriksson had over-cammed all the cams; it seemed the crack was no longer fist-sized, but now bomber hands. Evidently, the Pinnacle of Hammerdom had significantly shifted in the three hours since Eriksson led it, teetering against the glacier-polished face of the Captain.

“We’re talking a crack that’s like 200 feet high or more,” Zabrok said. “That whole Pinnacle of Hammerdom is ready to come off at any time. It’s very spooky and scary. At this time of year there’s a greater thermal load on the rock because the angle of the sun is more straight on. Combined with the really cold nights, there’s a lot of movement up there.”

When the team was safely anchored above the Pinnacle, they let out a collective sigh of relief, this time confident they were out of harm’s way. From there they followed Hole World (VI 5.8 A4) up to Thanksgiving Ledge, and on to the top.

With the 11 nights he spent up on the side of the wall for Winds of Change, Zabrok calculated that he has now spent 767 nights sleeping on the side of El Capitan (not counting nights spent bivying at the base or summit).

And while two eerie, close-call experiences on the exact same day one year apart might be cause for some to call it quits at 61 ascents, Zabrok is already formulating plans for further El Cap adventures. He has his sights set on other new-to-him tenuous aid lines and other ways to make El Capitan a novel experience. He and friend Jacob Raab are scheming for what Zabrok calls a “jazz ascent” next year. On Winds, Raab jugged up for a night with his flugelhorn and jammed with Zabrok, who had lugged his electric keyboard and a speaker up the wall.

“We were jamming Coltrane and Monk up there,” Zabrok said excitedly. “There must have been 15 or 20 people down in the Valley who said they heard us. We got rave reviews!”

The Pirate: Adventures with Ammon McNeely