“Talk about wanting to go home!” Whittaker cried in mock ire onstage after the premiere of the new film High and Hallowed, at the MountainFilm festival in Telluride on Friday night. “Two weeks go by, three weeks go by—I have to wait for these guys and they’re screwin’ around on the West Ridge!” 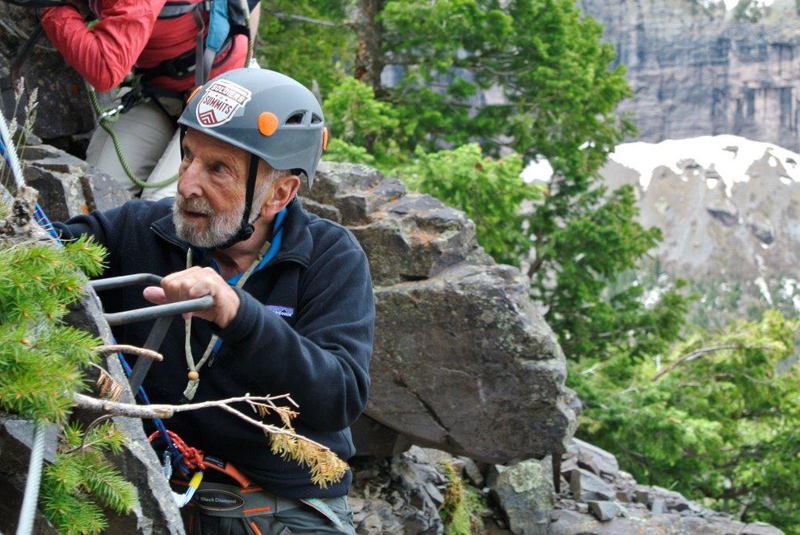 Those were what Jim Whittaker said he missed, and looked forward to, after climbing Everest in 1963.

“Talk about wanting to go home!” Whittaker cried in mock ire onstage after the premiere of the new film High and Hallowed, at the MountainFilm festival in Telluride on Friday night. “Two weeks go by, three weeks go by—I have to wait for these guys and they’re screwin’ around on the West Ridge!” (Watch trailer for High and Hallowed here.)

So went one of the hilarious lines traded by Whittaker and the stroppy and mirthful Tom Hornbein following the opening of this hour-long film about the historic Americans on Mount Everest Expedition 50 years ago.

In one of the greatest tales in mountaineering, the Everest 1963 team succeeded on the first American ascent of the mountain, and pioneered the formidable and technical West Ridge. The expedition experienced sorrow and loss, and was divided by conflicting objectives, yet elevated by tenacity and a cooperative spirit. (See the Rock and Ice feature on this expedition, in issue No. 211, now on stands.)

The sold-out High and Hallowed audience was riveted by the sweeping tale. Whittaker and Sherpa Nawang Gombu summitted via the South Col in a blizzard during an era when fewer than 10 people had climbed the peak, and they lacked the information, gear or fixed ropes of today. Three weeks later, the determined Tom Hornbein and forceful Willi Unsoeld committed themselves completely on the West Ridge, and survived what was the highest open bivy in history.

Directed by Dave Morton, Jake Norton and Jim Aikman, the film skillfully meshes the perspectives of surviving expedition members and contemporary climbers. It follows members of a 2012 expedition seeking to replicate the West Ridge ascent, but the gold is the archival footage, and the charming and frank audio, from the mountain 50 years ago.

Gorgeous sunny skies blessed the 35th MountainFilm festival May 24-27. Although the fest offers such a plethora of films that people often rush around with almost no time to eat, each film airs twice, so you can usually find a way to see any one.

Another fest highlight was Duk County, by Jordan Campbell, which followed the journey of a small group of American “miracle doctors” who performed sight-restoring procedures on nearly 200 patients in the war- and famine-beset South Sudan. John Dau, who at age 12 escaped an attack on his village to lead the Lost Boys in their escape from the South Sudan, presented the film and answered questions. Other guests were the physicians Geoff Tabin (a climber, as are Campbell and Ace Kvale, the still photographer), Roger Furlong and Alan Crandall, who performed cataract and other surgeries for long hours in 100-degree heat during a five-day visit. The doctors plan a 10-day stay next January.

The Kyrgyzstan Project, by Jim Aikman and Matt Segal, was another gem, a beautiful rendition of the 2011 return to the Ak-Su Valley for John Dickey, an American climber-photographer. In 2000 he and three other climbers were kidnapped by Islamic militants and held for six days, only escaping through a forced act of violence.

Dickey returned to the area, he said after the film aired, for “unfinished business.”

“But a lot of the spark,” he added, “was that the climbing was that good.”

The Kyrgyzstan Project is concluding its series of festival rounds, and Dickey says it may next appear online. High and Hallowed and Duk County, which are new releases, are slated to show at other festivals.