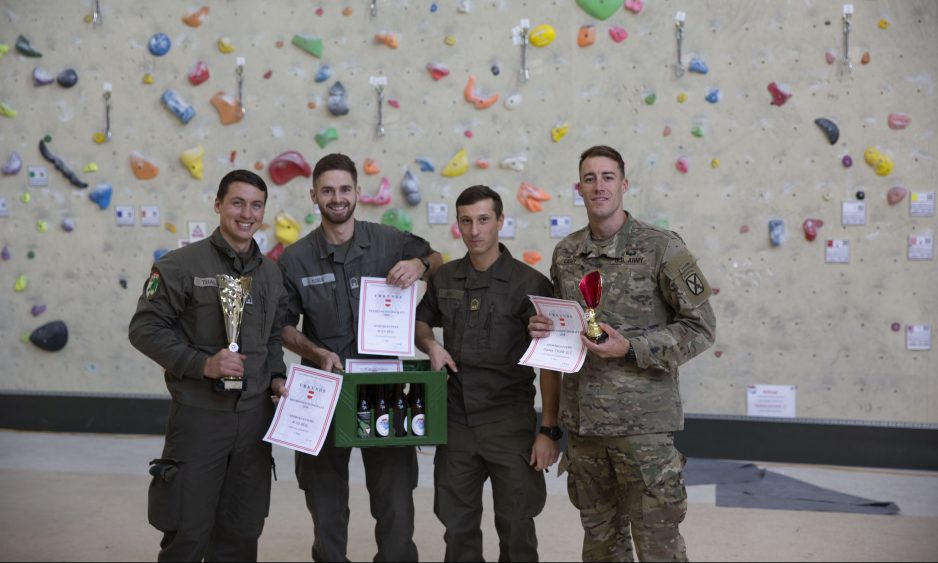 Travelling to Mitterdorf, Austria, as the sole competitor representing the U.S. Armed Forces and the first American soldier to compete in an international military climbing competition, First Lieutenant Tyler Casey was a bit nervous. “Going into it, I had no expectations,” Casey said in a phone interview with Rock and Ice. “There are a lot of people in Europe in the military that are world-class athletes. Slovenia has some, Spain has some, France…  I was like, well, I’m just going to get my ass handed to me.”

A 25-year-old Dallas, Texas native now based in Colorado with the National Guard, Casey began climbing while in college at the University of Arkansas. An avid climber of all disciplines, Casey eventually became a member of the local route-developing community, climbing at crags such as Sam’s Throne, Rock Creek and the Cowell Area. Though he is an experienced trad climber and sport climbs up to 5.13+, aside from a handful of bouldering comps and a single collegiate competition (which he won), Casey had almost never climbed competitively. “I wouldn’t call myself a competition climber, by any means,” he said.

[Also Read The Mountain Soldiers of the U.S. Army: From WWII to Today]

The Austrian Military World Climbing Championships, which has been held annually for around a decade, is a sport climbing competition which brings together climbers from the militaries of various European nations, including Germany, France, Poland and Switzerland. In the past, noted Casey, the United States—whose military places a much-reduced emphasis on climbing compared to mountain nations such as Slovenia and Austria—had never fielded a competitor.

But after the semi-finals on November 18, out of nearly 100 soldiers who showed up from across Europe to compete, Casey was in the lead. He was also one of a mere handful who managed to clip the chains on the semi-finals route. Though a few botched moves in the finals cost him the gold, he managed to finish in third place, which was still much better than he’d expected.

He confessed the comp was easier than he’d anticipated, with the finals route only coming in around 8a (5.13b), by his estimate. Still, Casey noted, “The biggest thing I took away was the support from everyone. Everyone was really excited to see an American in the competition, and I also don’t think they expected an American soldier to climb well. There were definitely some shocked people.”

Though America has long been a major player in the civilian international competitive climbing scene, competitive military climbing is a new thing for the U.S. While other militaries, those of European nations in particular, have fielded climbers for international military climbing comps for a number of years, the U.S. military has never once competed. “The Army’s pretty active with certain sports, like running, shooting… we have a long history of international competition in sports like that,” said Casey. “But climbing is a relatively new thing for our military. We’re still developing that culture.”

Asked about the potential benefits he believes climbing can have on soldiers, Casey noted, “When you climb, you learn to plan hard objectives, to problem solve. It takes gumption, confidence. I think you gain a lot from climbing that can be applied to to being in the military.”

Casey hopes to train more soldiers to compete in Austria next year and in other international military competitions (another Military World Championships is taking place in Moscow this week). “I want to get something off the ground and running, maybe start a military team to try for the [Olympic] Games,” he added. “Maybe not 2020, but definitely in the future.”

Rock Climbing Saved My Life: A Veteran’s Struggle With PTSD