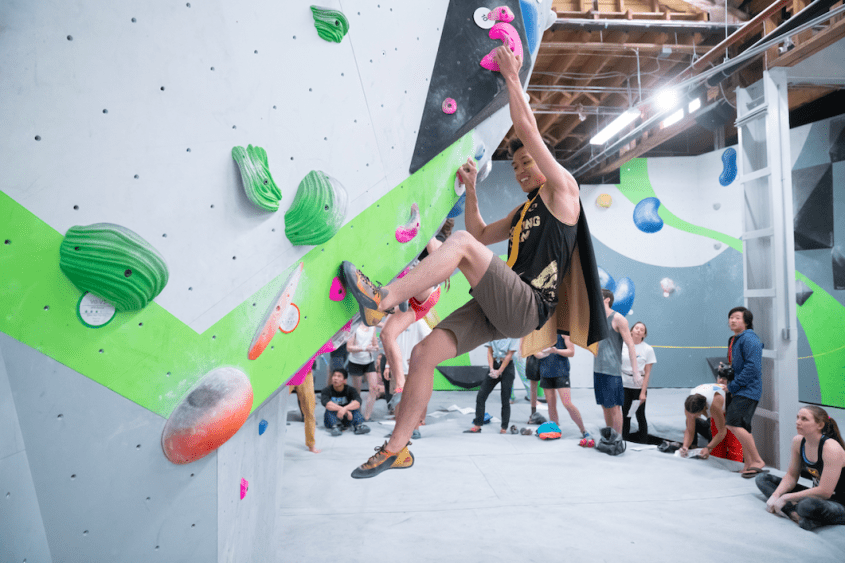 For the first time since the Outdoor Retailer (OR) show relocated from Salt Lake City to Denver in 2018, climbers will have the opportunity to channel their competitive spirit into an organized event. While past show comps were for bouldering events and more recently the over-water Psicobloc contest, this one will be a new format: a team event, and with a fat purse.

“I will be competing” said Paul Robinson, a professional climber that has bouldered up to V15. “… I think the team format is really cool. I did a team comp many years ago at sender one and it was a blast.”

The North Face Top-Out Knockout Competition, hosted by Movement Climbing + Fitness RiNo, will begin on Wednesday, June 19, the second day of the show. Rather than scoring competitors individually, the comp will based on cumulative scores from teams of four. Each team will include two men and two women. The grand prize for the winning team will be a big $10,000.

“There is something about the idea of teams and coed,” said Kynan Waggoner, the chief operations officer of Movement Climbing + Fitness gym. “We can create a feeling similar to that of collegiate or youth nationals, of being supported by teammates and being in something together.”

“And honestly, it’s just something fun to do after a day of being stuck in OR meetings.”

The summer OR show is one of the biggest outdoor industry trade shows of the year. Retailers, reps, exhibitors, media and ambassadors all attend to network, buy and sell products. It’s three days of meetings and extended afternoon happy hours. For the athletes in attendance, this comp will provide a lively reprieve.

The comp will feature 20 boulders. Each team will have five minutes per boulder and each member can give boulders as many attempts as they want within the time limit. As in USAC competitions, each boulder will be worth a maximum of 25 points, so a perfect team score per boulder is 100 points.

Ryan Sewell, Director of Routesetting for Movement Climbing + Fitness, stated in a press release, “We can all see the sport of competition climbing changing before our eyes, and I’m very excited to see if the team concept of this event can translate to an added level of excitement …. As the event will be coming on the heels of the 2019 Vail Bouldering World Cup, perhaps there will even be some international athletes joining us!”

Registration can be found here. If more than 20 teams sign up, a new wave will be added to the competition schedule. Cost per team is $200.

Pointers From the World’s Top Climbers